Gosh, we get zero news for days and then bam! -- It's been eventful, to say the least.

Henry kicked off the weekend with a fun Friday throwback and that was followed by Guy Ritchie's post marking the fifth anniversary of The Man From U.N.C.L.E.'s release. Then Henry had to go and comment on the director's post to leave us feeling all mushy... 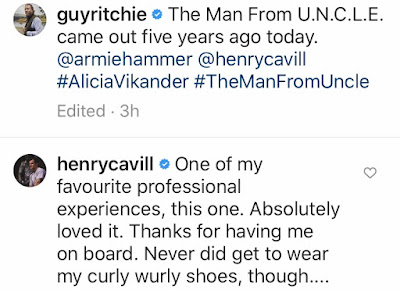 Here's to Solo getting that second adventure teased at the end of the film.

Another role fans have really loved, was Henry's emotional performance in Nomis/Night Hunter. Guy at the Movies is planning a watchalong on August 29, followed by a Q&A with director David Raymond. Tune in at 7pm EST.


Finally, the DC FanDome schedule has been released and Zack Snyder will be joined by special guests at 5:45pm EST next Saturday, for a panel discussing his original cut of Justice League.

The Snyder Cut of Justice League

2:45PM (Encores at 10:45pm, 6:45AM, 8:15AM)
Hall of Heroes
Zack Snyder fields questions from fans and a few surprise guests as he discusses his eagerly awaited upcoming cut of the 2017 feature film and the movement that made it happen. (25 min)

You can make your own schedule and prepare for the big day by visiting dcfandome.com

You’re gonna need all 24 hours of #DCFanDome. Build your schedule, add it to your personal calendar, and even share it with friends to make sure you don’t miss a thing on August 22! https://t.co/lcm4jTqLg5 pic.twitter.com/fUFLg1Xfpy
— Superman (@DCSuperman) August 14, 2020