“Welcome back, Superman.” My honor to have the first public conversation with Henry Cavill about his return as the Man of Steel. @92ndStreetY 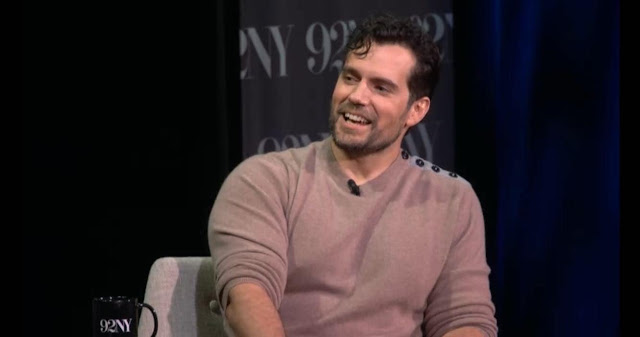 We are cheering for Henry as he appears at a Q&A with MTV's Joshua Horowitz after announcing he's back as Superman. All pics and videos from New York will be posted here. It comes a day before the premiere of Enola Holmes 2 in NYC, so stay tuned for the very latest!

Henry Cavill Says Superman Will Be ‘Enormously Joyful’ When He Returns: ‘I Never Gave Up Hope’ and ‘There’s a Bright Future Ahead’ https://t.co/PohWQMPq2J

Of course this moment comes up 💪🏻 Henry says he was warming up his biceps before the scene and move ended up making it in the film. #MissionImpossibleFallout #HenryCavill @92ndStreetY pic.twitter.com/exOd3myCl0

Henry says he can’t really talk about future Superman plans or The Witcher S3. He did shut down #Loki rumors. Also says he’s been spending “a lot” of time gaming. #HenryCavill @92ndStreetY pic.twitter.com/xzl0OJCDNX

Henry Cavill wore the #Superman suit from #ManofSteel for #BlackAdam:

“I chose that one in particular because of the nostalgia attached to the suit...It was incredibly important to me to be standing there and enjoying that moment" https://t.co/QFf2Yu0qUW pic.twitter.com/p5MXdCFjgu

Henry Cavill says he got the call to film his #BlackAdam cameo as Superman while he was filming Netflix fantasy series #TheWitcher. “I went to Warner Bros.’ studio in the UK and got back in the suit. It was a very powerful moment for me.” https://t.co/rPvWv5KFIy pic.twitter.com/4WzeyuqsCt

“I’ve learned the most from Superman.” Henry Cavill talking about his roles @92ndStreetY pic.twitter.com/vzXlewRHAw

Henry Cavill responded to Zack Snyder's video by saying, “He’s a lovely man, and I am enormously appreciative for everything he’s done for me" https://t.co/QFf2Yu0qUW pic.twitter.com/ONtllcJlb8

Henry Cavill also revealed that he had to get permission from #TheWitcher team for his appearance in #BlackAdam but, “It was so top secret we couldn’t tell them what" https://t.co/QFf2YtJnSW pic.twitter.com/Lg1SCH8iod

Is there a specific plan? Is there a script, a director, or a story, or our we at the stage where we’re figuring out what the next SUPERMAN story is? pic.twitter.com/kHw7WgQU5t

Last question: Kal’s super power: “Being there for me.” Henry Cavill wrapping up his interview with @joshuahorowitz tonight. 👏🏻 @92ndStreetY pic.twitter.com/eAd1qLW5cP

My good friend, and fellow #Superman fan, Sara (@LelainaPrz) was at the #HenryCavill Q+A this evening and got to see him outside.

She even got to thank him for returning to the role of Superman!

I only bring the camera out for special occasions, and honey, this was special. I love just seeing Henry Cavill smile :’)@92ndStreetY pic.twitter.com/C3esdIS78P