Henry Opens Up About His Girlfriend: "She's Fantastic" 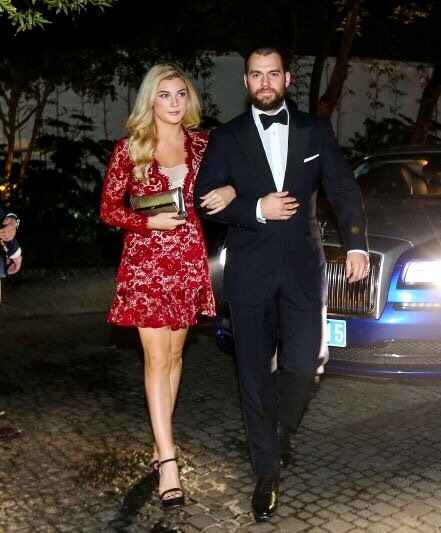 Henry talked to ELLE magazine as part of the Batman v Superman promotion, and it's a revealing interview where he opens up about his relationship with his girlfriend Tara (who he's been dating since late last summer), their age difference, and what he thinks about people having a "hall pass." 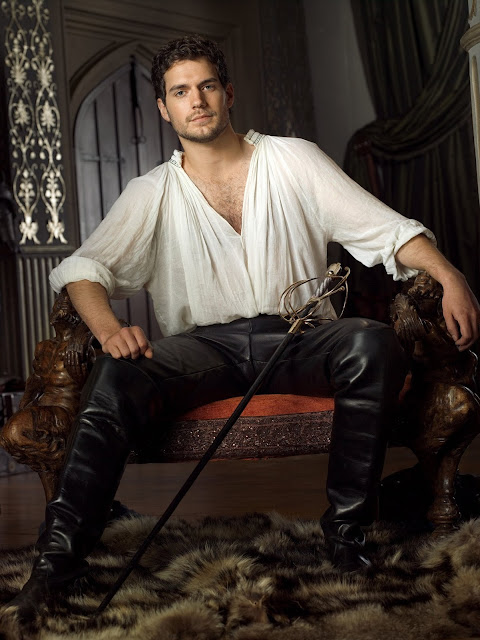 Henry also mentions his resistance to taking off his clothes during his time in The Tudors, and much more!

Read his interview by clicking on the pic or below.  UPDATE (2/19): Henry's interview is now online. 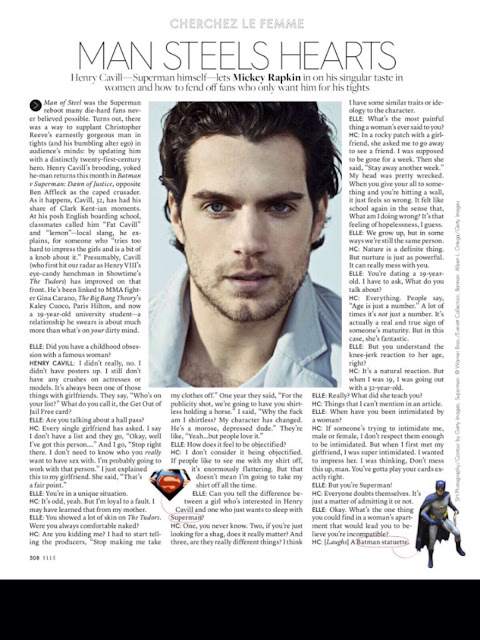 Man of Steel was the Superman reboot many die-hard fans never believed possible. Turns out, there was a way to supplant Christopher Reeve’s earnestly gorgeous man in tights (and his bumbling alter ego) in audience’s minds: by updating him with a distinctly twenty-first-century hero. Henry Cavill’s brooding, yoked he-man returns this month in Batman v Superman: Dawn of Justice, opposite Ben Affleck as the caped crusader.

As it happens, Cavill, 32, has had his share of Clark Kent–ian moments. At his posh English boarding school, classmates called him “Fat Cavill” and “lemon” — local slang, he explains, for someone who “tries too hard to impress the girls and is a bit of a knob about it.”

Presumably, Cavill (who first hit our radar as Henry VIII’s eye-candy henchman in Showtime’sThe Tudors) has improved on that front. He’s been linked to MMA fighter Gina Carano, The Big Bang Theory’s Kaley Cuoco, Paris Hilton, and now a 19-year-old university student — a relationship he swears is about much more than what’s on your dirty mind.

ELLE: Did you have a childhood obsession with a famous woman?

HENRY CAVILL: I didn’t really, no. I didn’t have posters up. I still don’t have any crushes on actresses or models. It’s always been one of those things with girlfriends. They say, “Who’s on your list?” What do you call it, the Get Out of Jail Free card?

ELLE: Are you talking about a hall pass?

HC: Every single girlfriend has asked. I say I don’t have a list and they go, “Okay, well I’ve got this person….” And I go, “Stop right there. I don’t need to know who you really want to have sex with. I’m probably going to work with that person.” I just explained this to my girlfriend. She said, “That’s a fair point.”

ELLE: You’re in a unique situation.

HC: It’s odd, yeah. But I’m loyal to a fault. I may have learned that from my mother.

ELLE: You showed a lot of skin on The Tudors. Were you always comfortable naked?

HC: Are you kidding me? I had to start telling the producers, “Stop making me take my clothes off.” One year they said, “For the publicity shot, we’re going to have you shirtless holding a horse.” I said, “Why the fuck am I shirtless? My character has changed. He’s a morose, depressed dude.” They’re like, “Yeah… but people love it.”

ELLE: How does it feel to be objectified?

HC: I don’t consider it being objectified. If people like to see me with my shirt off, it’s enormously flattering. But that doesn’t mean I’m going to take my shirt off all the time.

ELLE: Can you tell the difference between a girl who’s interested in Henry Cavill and one who just wants to sleep with Superman?

HC: One, you never know. Two, if you’re just looking for a shag, does it really matter? And three, are they really different things? I think I have some similar traits or ideology to the character.

ELLE: What’s the most painful thing a woman’s ever said to you?

HC: In a rocky patch with a girlfriend, she asked me to go away to see a friend. I was supposed to be gone for a week. Then she said, “Stay away another week.” My head was pretty wrecked. When you give your all to something and you’re hitting a wall, it just feels so wrong. It felt like school again in the sense that, What am I doing wrong? It’s that feeling of hopelessness, I guess.

ELLE: We grow up, but in some ways we’re still the same person.

HC: Nature is a definite thing. But nurture is just as powerful. It can really mess with you.

HC: Everything. People say, “Age is just a number.” A lot of times it’s not just a number. It’s actually a real and true sign of someone’s maturity. But in this case, she’s fantastic.

ELLE: But you understand the knee-jerk reaction to her age, right?

ELLE: Really? What did she teach you?

HC: Things that I can’t mention in an article.

ELLE: When have you been intimidated by a woman?

HC: If someone’s trying to intimidate me, male or female, I don’t respect them enough to be intimidated. But when I first met my girlfriend, I was super intimidated. I wanted to impress her. I was thinking, Don’t mess this up, man. You’ve gotta play your cards exactly right.

HC: Everyone doubts themselves. It’s just a matter of admitting it or not.

ELLE: Okay. What’s the one thing you could find in a woman’s apartment that would lead you to believe you’re incompatible?

You can find Henry's new interview on the March Issue of ELLE, which is now out on newstands (last page). Order your copy here. 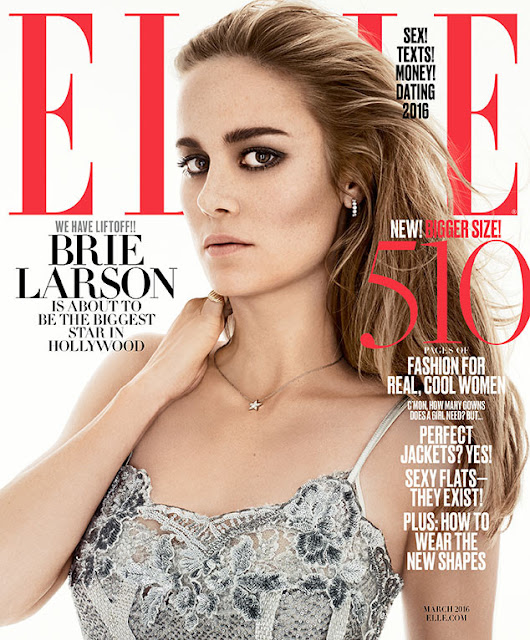 @HenryCavillNews Wow! This is the most personal interview I've ever read or heard from him. Sweet words about his ❤️. I'm happy he's happy!😊
— Tammy (@TamSan1976) February 14, 2016

@HenryCavillNews He is an amazing person who deserves to be happy. It's hard to imagine him been nervous about a girl. So sweet.
— Haydée A. (@LatinasianP) February 14, 2016