Henry On Guilty Pleasures, Dancing With Kal, His Ideal Woman 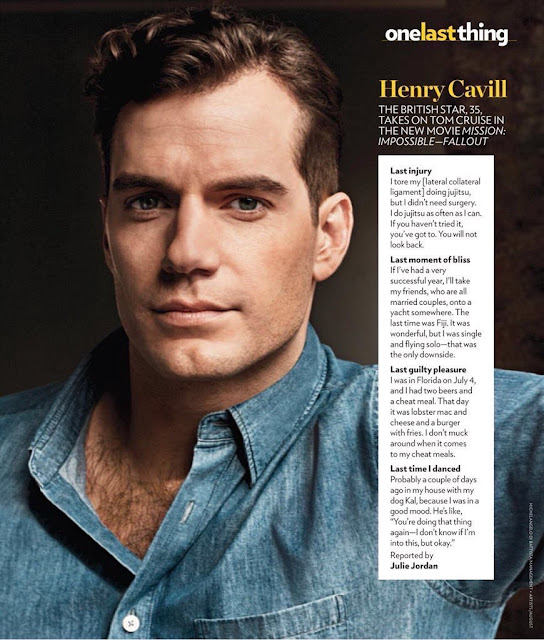 Henry shared some memorable moments from the past few months with People magazine (above). He also talked to Australia's Herald Sun, and the print version comes with a few new photos from his Paramount  promotional shoot by Gavin Bond. 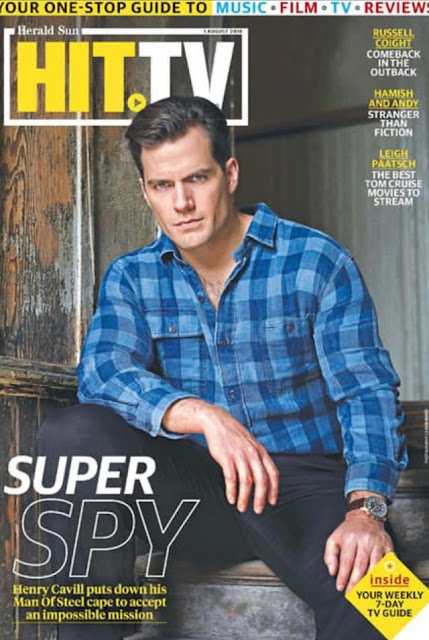 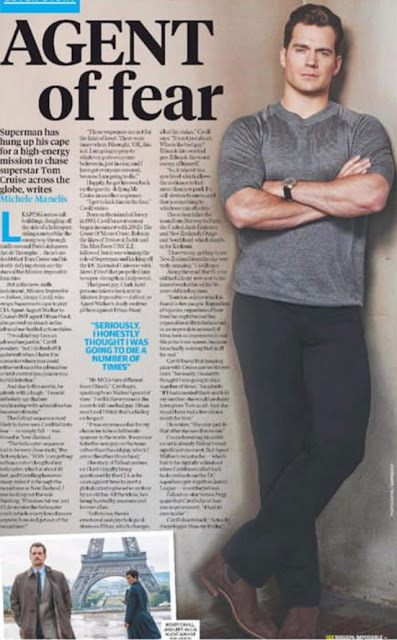 
Matching the super HOT weather today may I introduce HOT Henry Cavill aka SUPERMAN ✌🏼💥👊🏼 I met him the other day in London for an interview. For Cosmopolitan Germany issue 8. Out now. His new role? Not Superman but a super FBI agent in „Mission: Impossible-Fallout“ (in German cinemas august 2) Chasing Tom Cruise and wearing a pretty hot moustache. Go read and watch! By the way: his chest IS made of steel #cosmoontour #henrycavill #superman #funfearlessinterview #missionimpossible #manofsteel #muscles and #brain #verybritish . . . #stunts #tomcruise #paramount
A post shared by Melanie Eva Jassner (@cosmo_mel) on Jul 26, 2018 at 10:52am PDT


A huge thanks to Rebecca for translating it for us. Give it a read below.


Head reporter Melanie Jassner meets a cool guy for an interview every month. This time she met one of the most charming superheroes and secret agents of Hollywood.

Since Henry has flown as Superman (since 2013, so to speak), he is considered one of the hottest men on earth. One made for hero roles. Even as a sexy Agent he impresses people with his charm, most recently in Guy Ritchie's 'Man from U.N.C.L.E.' For the role of James Bond, he was a desirable candidate. Since he was too young then, the part went to Daniel Craig. Now the Briton chases Tom Cruise in the sixth part of Mission Impossible.

How fitting: for the interview, we meet at a London private club. Although Henry Cavill looks surprisingly down-to-earth, in a grey hoodie, jeans and trainers, his appearance is classy like a person in a tuxedo. He is a true gentleman, very courtly, very accurate. With his British accent and shy smile, he reminds me of Hugh Grant in Notting Hill. We sat down at a corner table (seats). His gym-honed body fits just between the seat and the edge of the table; he puts his forearms carefully on the table.

Q. What is better trained, your body or mind?

Q. Then you have to be very smart sometimes

A. When my emotions overwhelm my sense of reality. Of course, my job is very emotional. And sometimes my feelings are stronger.

Q. How much fun was it when you decided on Mission Impossible to do all those daredevil stunts yourself? Did you not want to appear as a coward in front of Tom Cruise?

A. No, no! I always wanted to do my own stunts, in the previous films I was always advised against it because of risk of injury.

Q. There is a funny anecdote about your current co-star: You bought an Aston Martin with your first paycheck, while Tom Cruise paid for his sister’s college. Is Tom Cruise too good or are you too selfish?

A. I’m definitely not selfish.

Q. You just don’t have a sister.

A. Exactly. Otherwise, of course I would have paid for the college (smiles). I have four brothers and my mother has managed to raise all of us as good guys. My mother is my heroine. She is an absolute legend. So strong and positive. She has shown us that you should always be there for others, to protect others.

Q. Since you play Superman, are you always expected to be the protector?

A. On the contrary. Since I am an actor people do not expect anything like that from me.

Q. You and your brothers have grown up on the quiet, idyllic Jersey, Channel Islands. Now you are committed to the preservation of Jersey zoo. How come?

A. As a little boy I was always there and helping animals is close to my heart.

Q. Was zoology an option other than acting?

A. Maybe. But I would have probably gone into the army or become an archaeologist. But I like animals. I always wanted a dog and four and a half years ago bought an American Akita called Kal. He is the best companion. Together we travel the world. It is unconditional love.

Q. And yes dogs are like their owners. An American Akita rarely barks...

A. Right! I am definitely a quiet guy. A lot has to happen for me to get loud.

Q. And they (Akitas) have a complex personality. Do you understand yourself?

A. I think no one really understands themselves. Often another person helps you get an insight on yourself.

Q. Which other person would that be? Or more precisely, how do you imagine your Wonder Woman?

A. Warmhearted, supportive, intelligent, worldly, beautiful…She should want a family and be loving. And be accepting of being taken care of by me.

Q. Is there a special type?

A. I’ve learned that I do not have a type. It's somebody I would fall in love with.

A. Ultimately, a mission that one has little influence on. And by that I mean love in a relationship and between friends. Often life makes that decision.

Q. Is there someone who comes to mind?

A. Adam Brown, a very close friend, who was a Navy Seal. There is a book about his life, which, unfortunately, he lost much too soon. It’s called ‘Fearless’. Reading the book has touched me so much. Adam is an incredible example of how one should live one's life.

Q. Was Russell Crowe also a hero for you? You mentioned something like that...

A. Not a hero. Heroes came from my immediate surroundings but with Russell Crowe I had a nice encounter. He shot a film at our school and during the break I went to him and said, "hello, my name is Henry, it's nice to meet you, how does it feel to be an actor? A week later, he sent me a photo of himself as a gladiator with the message: “A journey of a thousand miles begins with a single step”. In Man of Steel we finally acted together.

Q. Where is your journey going? What would you, Henry Cavill, like to achieve?

A. When I am no more, I would like for my family to be protected for generations, so they can lead a secure and carefree life. That is my goal. I hope I can do it.


For many more interviews from the Mission: Impossible Fallout press tour, make sure to check our junket wrap and YouTube Playlist.