You think you could guess an impossible scenario? The MI:6 cast definitely gave it a try! 😂 - - - #mi6 #tomcruise #premiere #90min #football #movie #henrycavill #vanessakirby #simonpegg #cinema #missionimpossible
A post shared by 90min (@90min_football) on Jul 11, 2018 at 9:04am PDT


The Mission: Impossible Fallout junket interviews are starting to hit the web, and this first one is funny! (make sure you swipe to see the second part). Some of them were shot at CinemaCon but were embargoed until now. We'll continue adding them on this post (and when available, to our YouTube playlist) as they come in, and make sure you check out Henry's on set interview and tons of great behind the scenes in this post. 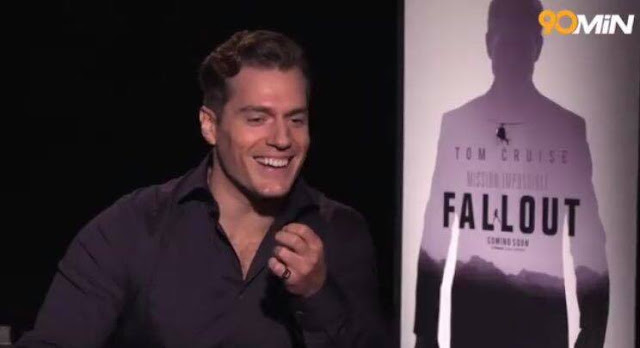 PREVIEW OF THE INTERVIEW WITH FOX 5

FREE PRESS JOURNAL: Henry talks about his character and the departure from being Supes.


SEE THE REST BELOW THE CUT


Henry talks about social media and his hesitation to create his accounts...

Henry Cavill gives us the scoop on when we can see another #Superman movie... pic.twitter.com/tdeAbEUgki
— Fandango (@Fandango) July 17, 2018

He may be Superman, but Henry Cavill thinks @SonnyJay is anything but super, man. 😱 Especially after he confused him with chat about fish eggs and spaniels! 🐶 https://t.co/TxGTfaeeI1
— Capital (@CapitalOfficial) July 20, 2018

Part 2 of my Henry Cavill #MissionImpossibleFallOut interview covers his ambition to play James Bond, rom-com aspirations and what he really thinks about reviews of his movies. https://t.co/a8x9s7wVK9
— Hanna Ines Flint (@HannaFlint) July 23, 2018

Direct from the cast, find out their favorite #TomCruise moment from #MissionImpossibleFallout! pic.twitter.com/HDMWuntN0P
— moviefone (@moviefone) July 24, 2018


Curious as to how Henry Cavill got so stacked for #MissionImpossibleFallout. Don't worry, we asked him for you. See the full video here https://t.co/IKdx2bHgw2 pic.twitter.com/4hjtHNMlek
— Men's Health (@MensHealthUK) July 26, 2018

ICYMI: We spoke to the cast of #MissionImpossibleFallout ahead of the film's release. Check out our interview with #HenryCavill here and see the rest below! https://t.co/7AqpRCLez3
— Culture Trip (@CultureTrip) July 26, 2018

Henry Cavill talked to us about #MissionImpossible stunts, not wanting to be labeled as "Fat Superman" and #MustacheGate: https://t.co/BAh5h4sqvR
— USA TODAY Life (@usatodaylife) July 26, 2018

The cast of #MissionImpossible - Fallout take us behind the scenes of the espionage epic to reveal what scares the fearless @TomCruise and the truth behind #HenryCavill’s infamous mustache. https://t.co/90U6eUqPiZ @MissionFilm pic.twitter.com/HmHdG8IUbz
— IMDb (@IMDb) July 27, 2018


How did #MissionImossibleFallout pull off that climactic helicopter chase? We talk to the director, stunt coordinator and star Henry Cavill to get the behind-the-scenes scoop https://t.co/7WWP7777lI pic.twitter.com/t7tyWl0OD9
— LAT Entertainment (@latimesent) July 28, 2018

READ HENRY'S INTERVIEW WITH THE MIAMI HERALD (in Spanish)

We quizzed Henry Cavill on famous mustaches. Here's how he did... pic.twitter.com/RRP9l4ePCj
— NowThis (@nowthisnews) July 29, 2018

Catch up with the #MissionImpossible: Fallout cast members #HenryCavill and #SimonPegg as they dish on stunts and @TomCruise ! #BETBreakshttps://t.co/kRQTSD7EnP
— BET (@BET) July 30, 2018