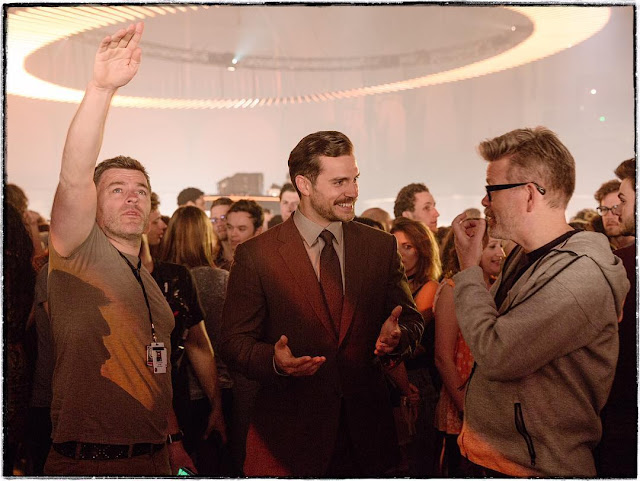 Watching Mission: Impossible Fallout was truly a fun experience, and it looks like making the film was just as enjoyable. This new behind the scenes photo by Chiabella James was just shared by one of the film's crew members, and we can't wait to see many more moments like this one when M:I Fallout is released on digital next month.


When we attended a Collider Q&A with Chris McQuarrie in LA a few weeks ago, the director described another deleted scene involving Walker:

There was a border crossing prior to Cashmere, we shot it when we were in New Zealand, which was early on. And it was, again, an information scene about making Walker a bad guy, and it was before we had shot, or even made friends with, or written the scene where Walker kills Hunley, so we were kind of trying to make Walker bad, and he murdered a bunch of people at the border, to whom you had no emotional connection. It was gorgeous looking, the whole set was fogged in. The fog, usually, you’re used to coming into work, the fog disappears five minutes after you get there, but it sat there all day. So it was a very eerie looking. It looks a lot like The Thing, of which Rob Hardy’s a huge fan, and Rob was like, “Oh my God, this scene looks like The Thing!” And I was like, “Yes it does! It’s gone.” And I knew when I was shooting it. I was like, “This is a safety. We can do better than this,” ’cause it’s a scene that’s making only one point. And if you look at scenes, a lot of times scenes that bug you in movies, or feel like, “What was that there for?” It’s ’cause the scene was just making a point, as opposed to being integral to the story, and it just feels like a detour.

He also mentioned King Stache and how Henry became the nemesis for Tom Cruise (read more at Collider). But our absolute favorite part, was when Steve Weintraub asked the director about the helicopter sequence at the end:

Henry Cavill was frozen solid. He’s in an open helicopter, sometimes at 7,000 feet, dead of winter, New Zealand, hundred miles an hour. I tested the open doors of the helicopter,in the summer in New Zealand. It was late summer, turning into fall. I got into the helicopter wearing what I’m wearing now, and a down vest, and said, “Take me up to 7,500 feet,” and we got up to 72, and I said, “Take me back immediately!” And it was cold. It was very, very cold. It was unpleasant. And when Henry was up there it was just bitter. He really is the unsung hero of that sequence. You know, when they say everything Fred Astaire did, Ginger Rogers did backwards and in high heels, everything Tom Cruise is doing, Henry is doing backwards with the doors open in sub zero temperatures. Freezing his eyeballs.

Was there ever a point where he actually said, mercy, let’s go down?

Yeah. Henry is the man. He’s really … and more so, he would come to work every day and find out that whatever his character was the day before was not that character anymore. “Ah, we rethought that, it didn’t work, it’s a whole other thing,” and Henry would say, “Well, can I do this? Yeah? Can I do that? Yeah? Okay.” And then he would just go off to work, and he’d never complain. He understood from the beginning, Mission has a mind of its own, it’s gonna go where it wants to go, just go with it and you’ll be delivered. And you see remnants of our figuring out his character early on in the story, and he really was great. He’s really extraordinary.

Again, you can read the entire transcript of the Q&A at Collider.