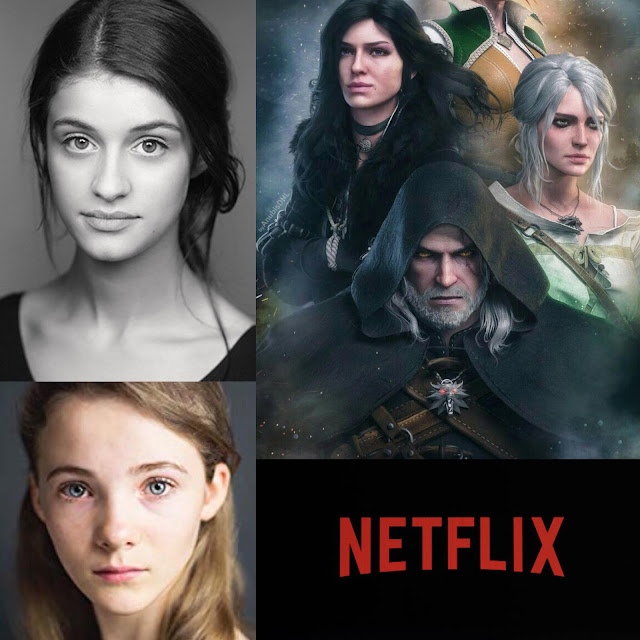 I couldn't be more thrilled about our ever-growing #Witcher family. Anya, Freya, and the rest of this jaw-dropping cast will slay monsters, your hearts, and everything else we put in front of them. https://t.co/gHkhf1mQlw
— Lauren S. Hissrich (@LHissrich) October 10, 2018

The Hollywood Reporter has revealed the rest of the cast for The Witcher, including the two young women who will play princess Ciri and Yennefer the sorceress. The two will have a close relationship with Henry's Geralt of Rivia.

The Witcher cast is finally here.  ITS FINALLY HAPPENING (via Netflix)


1: Henry Cavill is Geralt of Rivia... you probably already knew that though.
2: The enigmatic sorceress Yennefer will be played by Anya Chalotra.
3: Then there's Ciri. 17 year old Oxfordshire-native Freya Allan will play the pivotal Princess of Cintra!
4: From the court at Cintra: Queen Calanthe is Jodhi May.
5: Fledgling sorceress Fringilla is played by Mimi Ndiweni.
6: Sabrina is Therica Wilson-Read.
7: Millie Brady joins as the outcast Princess Renfri.
8: The druid Mousesack is played by Adam Levy
9: And Queen Calanthe's husband, the knight Eist, will be played by Björn Hlynur Haraldsson.
10: Tissaia, head of the magical academy, is MyAnna Buring.

The Hollywood Reporter also has a new interview with showrunner Lauren S. Hissrich.

Here are the questions relating to Henry:

The Witcher series, while centered on Geralt, features many strong female characters. Will the show feature Ciri and Yennefer in prominent roles alongside Geralt?

Yeah, what’s interesting is the first couple books are told from Geralt’s perspective and when I was reading them I saw that there are all these other characters who are very strong and powerful; not just the women, by the way. They can be pulled to the forefront so it doesn’t always feel like just Geralt’s journey, because the journey of one man is never going to be very interesting. It’s only going to be as interesting as the people he interacts with. That’s why these characters are rising in prominence in the series.

Did you intentionally cast lesser-known actors opposite Cavill, who is an established name?

Not specifically, nor were we looking for a movie star when we cast Henry. We’re looking for the best actors for these roles. Period. End of story. It comes down to the best actor for the role. Henry’s obviously a big fan of the franchise. We met in early April and had a very general meeting. I then went off and met with hundreds of other candidates for Geralt and never really got Henry out of my mind. In casting Anya and Freya, the cool thing was we were open to anyone and both of them, to me, embody the spirits of the characters.

Filming is expected to start very soon, so keep checking back for the latest production updates.

Sit back, have some vodka, and enjoy the ride #Witcher fans. There is always more to come. Always. 😍
— Lauren S. Hissrich (@LHissrich) October 10, 2018