A little over one month to go until the Mission: Impossible Fallout release, and there's more badass bathroom fight footage to share!

Film distributor Andes Films Chile posted the clip at the top, that includes the new video. Just a few days ago Henry mentioned the fight, after Tom Cruise shared this cool ad on his Instagram (click on the image to watch). 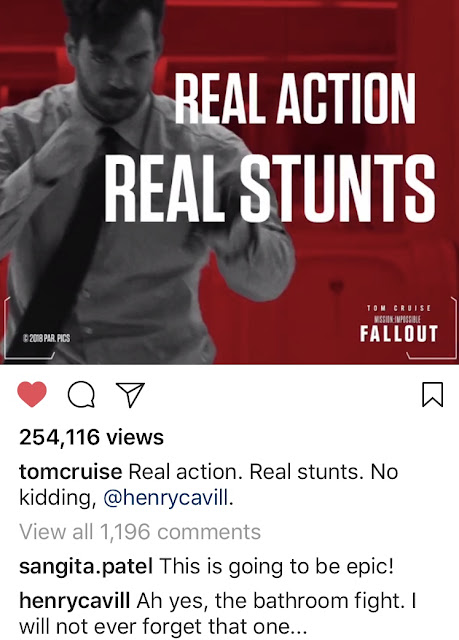 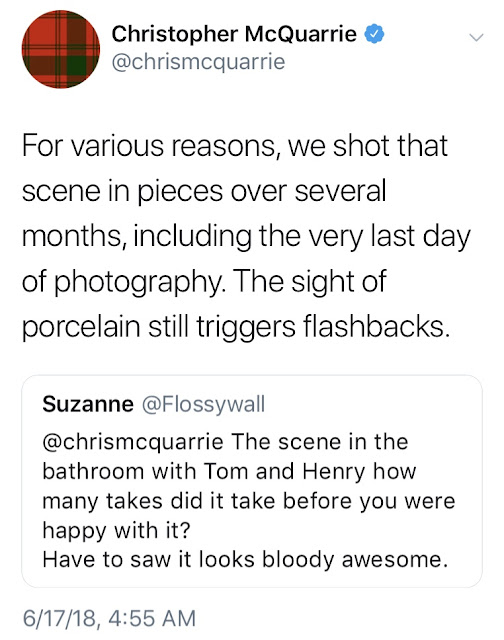 And we cannot forget Liang Yang, who is the one taking on both Tom and Henry in that very white bathroom. Henry introduced him to fans last summer.


Hi everyone! Meet Liang Yang who is another member of Eastwood Action Stunts. He hails from Harbin, China which is famous for building palaces made of ice during the winter!! I’m being serious here, actual palaces, Google that stuff....it’s nuts. Liang, before moving over to stunts, was a Chinese Wu Shu champion and it truly shows in his ability to move and fight with precision but also extraordinary speed and endurance. While I was shattered after the work we did together he seemed unfazed and remained smiling…. a true champion in ability and especially character. @LiangStunts @WadeEastwood #Stunties #MissionImpossible #MI6 #ChineseSuperman Edit: having read your comments I realise that an addendum to this post is necessary....Liang and I are not just spending time in a public lavatory together....it's a movie set. At least I hope it is, otherwise the bathrooms at Leavesden are faaaaar too busy for a working day!
A post shared by Henry Cavill (@henrycavill) on Aug 8, 2017 at 8:43am PDT


Many of you are SO pumped after watching Henry's signature move in the fight, that you've tried recreating it... wiiith not much success.


Just tried to reload my fists like Henry Cavill in that Mission Impossible trailer but knicked my right knuckle on my vanity and my eyes welled up. I feel the complete opposite of bad ass. pic.twitter.com/A8h5YG3V8W
— Mick 🎮🍿 (@G33kyMick) May 31, 2018

tried to reload my arms like Henry Cavill does in that Mission Impossible trailer and i immediately fractured my wrist and womped myself in the sack
— dom nero (@dominicknero) May 30, 2018


Hey, he is not Superman for nothing!


UPDATE: We have a second potential date to add to our promo tour calendar. The Media Eye is reporting that the film's UK premiere will be held a day after the Paris one, and that Henry will be in attendance.

Yune tells us the South Korea #MissionImpossible premiere is set for July 16th, with Tom and Henry expected to be there! https://t.co/in0twwS0Jv
— Henry Cavill News (@HenryCavillNews) June 21, 2018

Please keep in mind these dates are subject to change, as they are not officially confirmed by Paramount Pictures. More to come.

Check out our EXCLUSIVE artwork from @MissionImpossible – #Fallout and accept your mission in Dolby Cinema July 27!
A post shared by Dolby Cinema (@dolbycinema) on Jun 20, 2018 at 11:56am PDT