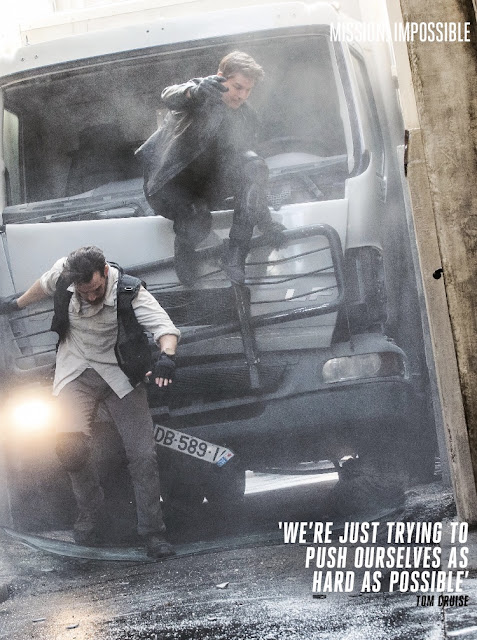 One of my favourite issues of Total Film to work on - got to talk #MissionImpossible Fallout with @TomCruise @chrismcquarrie #HenryCavill and more for the cover feature... pic.twitter.com/NiSKtmRuQ1
— Matt Maytum (@mattmaytum) June 1, 2018

The new issue of Total Film magazine is out today!

It includes exclusive interviews with the stars of Mission: Impossible Fallout including Henry, who shared details about his character, CIA agent August Walker:

"He's your go-to guy when you need someone to go bye-bye. He has no qualms about making that happen at pretty much any cost. It was a lot of fun to dig into that more aggressive side of my personality, because that's who Walker is."

Director Chris McQuarrie talked about why Henry was the right fit for the role as the main antagonist to Tom Cruise's Ethan Hunt:

I had a strong sense (Cavill) was being underutilized. I wanted to see his dark side, and it really paid off."

Henry also talked about the excitement of doing his own stunts in the film:

"I was in every single frame that you see me in the helicopter. I've always wanted to take on more stunts. Working with Tom really allowed me to get more involved in the stunt side of stuff. On the next movie I walk into, I can say, 'Look guys, I worked on a Mission Impossible movie. I did the stunts. Now you have to let me do the stunts.'"

He mentions the downtime he unexpectedly got, after Tom broke his ankle on set:

"I tried to start a special pact where we would all break our ankles in honor of Tom's, but no one took me up on that one (laughs). It's almost like getting a summer holiday at school."

The feature really gets into the incredible work that went into filming the stunts for the movie and Tom's dedication will leave you in awe. Mission: Impossible Fallout is out July 27.


UPDATE: Read the entire article now. Thanks for the scans, @SergioEES.