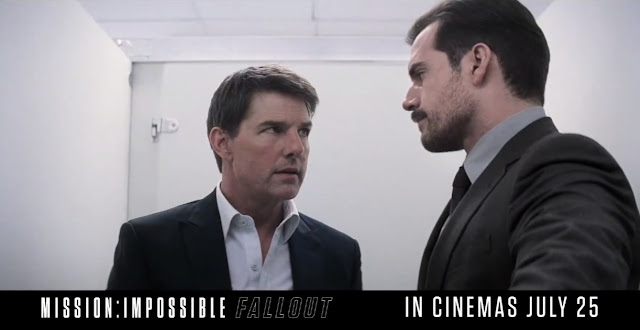 The ad is aptly named: Rivalry and you can watch it below!

Director Chris McQuarrie has also been posting some cool pics from the film's stunts, and shared a sneak peek at the opening credits as he praised the work of editor Eddie Hamilton.

And the moustache (at least a version of it) made its return... as Henry introduced the film's trailer in France.


It's so prevalent in fact, that fans have begun noticing its magical qualities...


Hi I shared this gif with some friends of mine for thirst reasons and then one of them pointed out that Henry Cavill appears to spontaneously grow a beard and WHAT THE FUCK pic.twitter.com/gIyPLvSWfh
— Michael "Abolish ICE and punch Nazis" Chu (@MichaelChu7) June 25, 2018


McQuarrie quickly coming up with an explanation.


There is a LOT of testosterone in that scene. https://t.co/5z3AMUubeQ
— Christopher McQuarrie (@chrismcquarrie) June 26, 2018

One month to go!

Mission: Impossible Fallout is out July 27 in the U.S. -- See the rest of the release dates.