'The Witcher' Promo Tour: Henry Headed To The Philippines 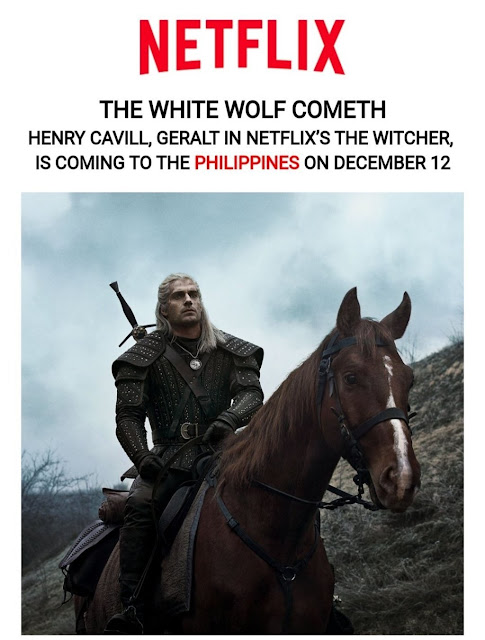 The promo tour for The Witcher is taking shape!

Today we learned that Henry will be visiting the Philippines for #TheWitcherInManila event on December 12th.

GMA News says fans attending the event at the Ayala Malls Manila Bay, will be treated to exclusive swag from the show and will get to watch the first episode of the series.

There will also be a special photo zone.

This is not a drill! Henry Cavill is coming to the Philippines this December! https://t.co/TOQZVseoeR
— ABS-CBN Corporation (@ABSCBN) November 28, 2019


Keep in mind that the event is first come, first serve with limited space available... so get there early!

Here are the rest of his confirmed appearances:

The world premiere of The Witcher is reportedly set for Monday, December 16 in London and we expect Henry to be there as well.  UPDATE: He's reportedly also attending the premiere of the show in Poland on December 18th.

Getting this off my chest because I can’t keep it in anymore: HENRY CAVILL IS COMING TO MANILA ON DECEMBER 12. Are you ready for Geralt of Rivia?? 🗡
A post shared by Netflix Philippines (@netflixph) on Nov 26, 2019 at 6:00pm PST

Email ThisBlogThis!Share to TwitterShare to FacebookShare to Pinterest
Labels: Fan Support, Promo, The Philippines, The Witcher