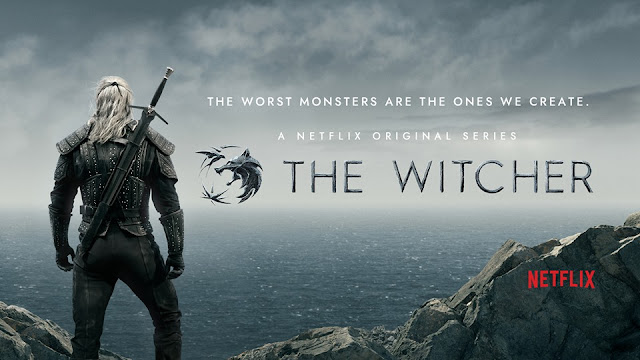 The Witcher fans attending MCM London Comic Con today, were treated to a special panel with Freya Allan and executive producer Lauren S. Hissrich. Here's a quick recap of what fans saw and what was discussed. Next up: A brand new trailer at Lucca Comics & Games next week!

Well, #HenryCavill was not at the @WitcherNetflix panel but we did get to see some exclusive scenes and it looks amazing. Henry knows how to use a sword!
I am so hyped for this show!#MCMLondonComicCon pic.twitter.com/MJp396gsOC
— The Geek Of Steel is at MCM Comic Con-SUNDAY ONLY! (@thegeekofsteel) October 27, 2019


Where does #thewitcher sit in the fantasy canon of television at the moment? Creator Lauren Schmidt said that they are not trying to replace Game of Thrones, but will try to find their own place. #mcmlondon
— Verena Cote (@verenaxcote) October 27, 2019


Judging from the first clip #thewitcher got a brilliant stunt team. And the queen taketh no shit. #mcmlondon
— Verena Cote (@verenaxcote) October 27, 2019


In short, a Witcher is a monster hunter, and they have become as hated as the monsters themselves in society. #thewitcher #mcmlondon
— Verena Cote (@verenaxcote) October 27, 2019


Freya has read the Blood of Elves to prepare for her role of Ciri, which has given her a good idea of the character’s essence “she is stubborn and feisty” with “a layer of vulnerability and loss and suffering”. #thewitcher #mcmlondon
— Verena Cote (@verenaxcote) October 27, 2019


Themes of the series are loss and how to cope with it, and family. #thewitcher #mcmlondon
— Verena Cote (@verenaxcote) October 27, 2019


Themes of the series are loss and how to cope with it, and family. #thewitcher #mcmlondon
— Verena Cote (@verenaxcote) October 27, 2019


The music and visuals are beautiful and the fighting we got to see was brutal and exciting. Henry does not hold back!
— The Geek Of Steel is at MCM Comic Con-SUNDAY ONLY! (@thegeekofsteel) October 27, 2019

Well, @HenryCavill was not at the @WitcherNetflix panel but we did get to see some exclusive scenes and it looks amazing. Henry knows how to use a sword! I am so hyped for this show! I also got this epic medallion! #mcmlondoncomiccon2019 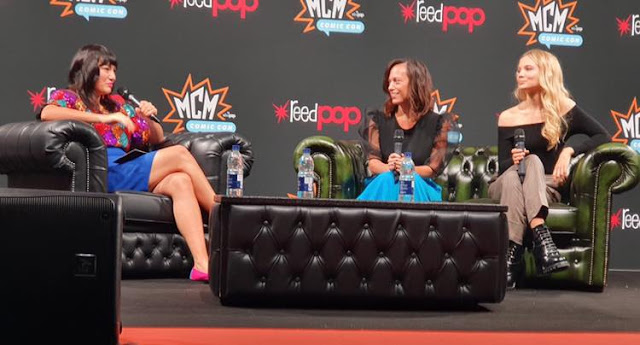 @TheRockFairy broke down for us the three clips shown during the panel with additional details (thank you so much). The first two scenes were shown at SDCC, the third one was new. Fair warning, they are spoilery:

1st clip: Scene in a great hall in a palace? The Queen of Cintra (I think) orders 'kill them both' to Geralt and another guy, epic sword fighting ensues against palace guard, real good action. Geralt and friend kicking ass, The Queen gets up, snatches a sword and fights, scene cuts when hers and Geralt's swords clash and have a tense gaze at each other. Lauren says there's a lot of action, Henry did all his own stunts, sometimes to their dismay/worry, but he insisted. The clip is from a scene that took 5 days to shoot.

2nd clip shows Yennefer on a beach talking to a dead baby, saying how the world is cruel, it doesn't matter how special people say you are (I think to reference own previous appearances) the rest of world pushes you down. I don't think it's her child, as she says 'maybe your mother was right'. It's a very emotional scene, ends with Yennefer burying the baby on the beach. - Lauren said these emotional scenes are important to build the world, and balance the action, violence and sex (!!) Its was shot in Gran Canaria, and for the longest time. It had a banner for VFX saying 'make baby dead'. Basically, they used a sleeping real baby and the note was to tell VFX to make it look dead. Then she described how to make a real baby look dead with VFX, lol.

3rd clip This one focuses on Ciri walking through a snowy forest, looking disheveled and cold. She comes across a silent guy, who Lauren says is a new character not from the book, called Daro. he helps Ciri by offering her some dead barbecued rat, she looks in disgust but takes it, she says she's been wandering from three days. - Freya says a lot of her scenes were in the snow/dark or rain lol. Lauren said she introduced Daro, as it was originally just Ciri walking in the forest not talking to anyone which would've been boring. Freya says that Daro is an integral part of Ciri's story in the series, as they are from parallel worlds but have a joint understanding of loss and loneliness.


I had an awesome time at the @WitcherNetflix panel and the interactive booth.

I had such a good time that I want to host a giveaway to help celebrate it!

Join me later tonight for all the details.

It’ll be Worldwide and Witcher themed! pic.twitter.com/pKyQkzycMd
— The Geek Of Steel is at MCM Comic Con-SUNDAY ONLY! (@thegeekofsteel) October 27, 2019

The Witcher had a photo booth where fans could battle one of the monsters from the Netflix series.

Fans were asked to share their experience, for a chance to win tickets to The Witcher London premiere on December 16. We're still waiting for official word on a release date for the show but as more details come in about the promotional tour, we'll keep updating you!

@HenryCavillNews saw this at #MCMLondonComicCon , seems the premiere is on 16 December, so assuming the rumoured date was not far off?? pic.twitter.com/m1Ge4ay1BE
— Balj (@therockfairy) October 27, 2019