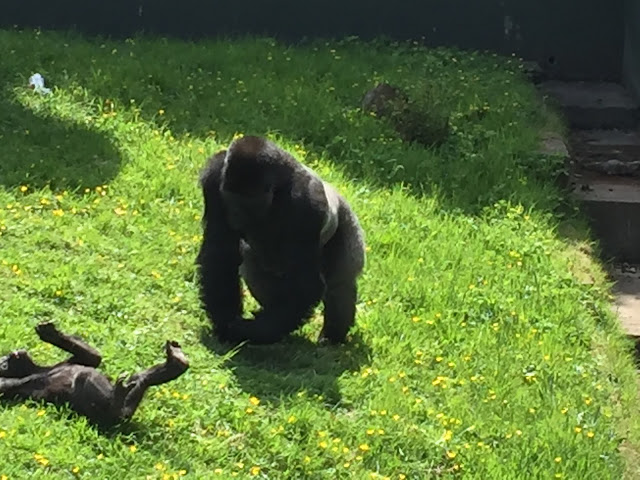 Badongo playing with his son Indigo at Jersey Zoo in May

And what an incredible dad he's turned out to be...


Bringing you some behind the scenes footage from the #Gorilla Keeper Cam! Lovely to see how gentle Badongo is with his young son, Indigo 💚 pic.twitter.com/HIF6RfltPk
— Durrell Wildlife (@DurrellWildlife) September 26, 2017


EDIT: We almost forgot that it's Indigo's birthday as well! (Thanks Paula), so sending birthday wishes to him. Here's a look at the two of them today.


It was a special day here at #JerseyZoo as we celebrated Badongo & Indigo's birthdays! Here's a little clip of them enjoying their gifts 🎁 pic.twitter.com/fkbpacfL6f
— Durrell Wildlife (@DurrellWildlife) September 27, 2017


Today is an extremely special day here at Jersey Zoo as we celebrate Badongo’s 18th and his son Indigo’s 5th birthday. The gorillas will be treated with birthday cards smeared in marmite, and presents in the form of boxes decorated with wrapping paper and filled with porridge oats, popcorn, sultanas and nuts. Delicious! This is a recent photo showing just how different father and son are in size, it’s amazing to think that one day soon Indigo will be just as large as his father.
A post shared by Jersey Zoo (@durrell_jerseyzoo) on Sep 27, 2017 at 2:29pm PDT

The gorillas at Jersey Zoo are part of Henry's adopted family, and you can be part of it too! -- Visit cavillconservation.com to learn more.

Henry has been an ambassador for Durrell Wildlife since 2014, raising valuable funds during charity events including The Durrell Challenge that will return next May!

In the meantime, you can still donate to Henry's fundraising page in support of his conservation efforts. More to come!

Just checking to see if there are any more birthday presents with Badongo's name on hiding in the keeper's office! pic.twitter.com/3EIztHuMcV
— Durrell Wildlife (@DurrellWildlife) September 28, 2017