So, there is this little movie coming out in November called Justice League. It may have come up on your radar once or twice. It involves a group of superheroes doing super heroic stuff. Facial hair is involved. Anyways, I'm here to let you know that you lovely people (who will undoubtedly have watched said movie at least 6 or 7 times by this point) will have an opportunity to come meet me, Jason Momoa, Gal Gadot, Ezra Miller, Ray Fisher and Ciaran Hinds in December at ACE Comic-Con in Long Island, NY!! Whaaaaat? I hear you say. Yes dear friends, get all your moustache related questions ready because I will be there to answer them. I can't wait to meet you all and to also wax lyrical about DC on the big screen. @PrideOfGypsies @Gal_Gadot @Rehsifyar @AceComicCon #EzraMiller #CiaránHinds #JusticeLeague #ACEComicCon Photo: @Jfabok
A post shared by Henry Cavill (@henrycavill) on Sep 19, 2017 at 10:02am PDT


That came out of nowhere... Supes is ALIVE!!

How exciting is the news Henry just broke on his Instagram and Facebook? We are so there! 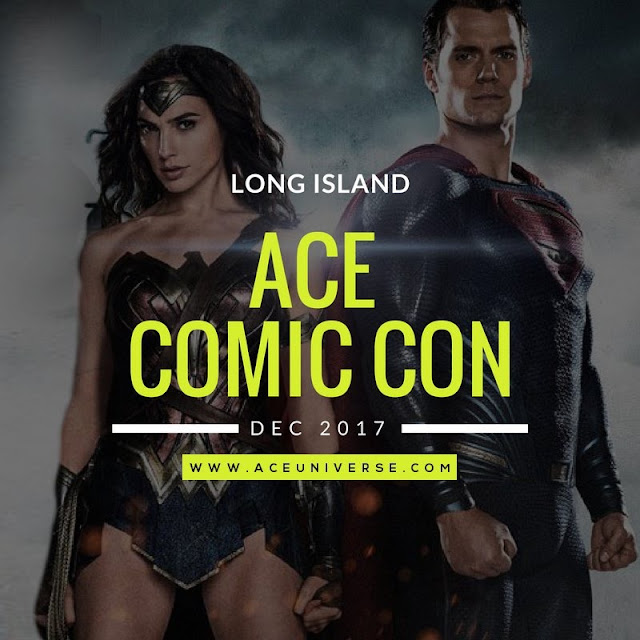 😁 #HenryCavill, his glorious mustache AND the #JusticeLeague are invading NY in December for @ACEComicCon. See you guys there!! #Superman pic.twitter.com/ao2dR45iIf
— Dany Garcia (@DanyGarciaCo) September 19, 2017


Read all the details of the just launched ACE Universe below. See you on Long Island in December!

NEW YORK, Sept. 19, 2017 /PRNewswire/ -- Brothers Stephen and Gareb Shamus, the world's most experienced producers of the wildly popular Comic Con conventions, today announced the launch of their new groundbreaking experiential company – ACE Universe. With 20 years of experience and 175 Comic Con shows to their name, the Shamus brothers have smashed the old model, which they pioneered, and developed a new immersive approach that will redefine the industry going forward.

ACE Universe is also announcing the dates and locations for its first events: December 8-10, 2017 at NYCB Live, home of the Nassau Veterans Memorial Coliseum on Long Island(New York), and January 13-15 at the Gila River Arena in Glendale, AZ. VIP tickets for the Long Island event are on sale now, and General Admission tickets for NYCB LIVE will go on sale Friday, September 22, all via www.aceuniverse.com on Ticketmaster.com, nycblive.com, or by calling 1-800-745-3000. Tickets can also be purchased at the Ticketmaster Box Office located at the Coliseum.

Tickets for the Glendale, AZ, event will be on sale soon. Stay tuned to the website for more details!

ACE Universe has secured partnerships across key sectors including Technology, Media, Entertainment, Gaming, Publishers, Manufacturers, Licensors, and Retailers to help create a robust experience for fans. The Comic Cons will be hosted in world-class Arenas, which bring a completely new set of aesthetics and benefits for attendees, including programming shown on the JumboTron, which means the fans will never miss a panel, regardless of where they are.

ACE Universe will be the first to provide free global live streaming to fans with wall-to-wall coverage of the entire Comic Con. Now, all fans can enjoy access to top-tier talent, breaking news and on-site programming as every aspect of the show will be fully streamed, social media friendly and available on mobile devices.

"We revolutionized the Comic Con industry in the 90's, and we're thrilled to do it all over again in 2017," says Gareb Shamus, ACE Universe Chairman & CEO. "We believe this is the optimal time to shake up the industry and recalibrate with a complete and total emphasis on the fan experience. Our new platform is centered on creating an unforgettable experience for fans by featuring meet-and-greets with stars from the latest hit superhero movies, quality vendors, professional creators, superior venues and immersive programming."

"We can't wait for seasoned Comic Con fans to experience our events, and we're excited to introduce all new types of fans into this incredible world, many of whom have never enjoyed a Comic Con before," says Stephen Shamus, President of ACE Universe. "Families can now enjoy a curated experience with access to top name Film and TV talent, artists, writers and other creative professionals."

In addition to the upcoming show in Long Island, ACE Universe will be announcing the full 2018 schedule, including dates, cities, tickets and VIP Admissions on www.aceuniverse.com. Stay tuned! Connect with ACE Comic Con at Facebook.com/acecomiccon & @acecomiccon on Instagram and Twitter.