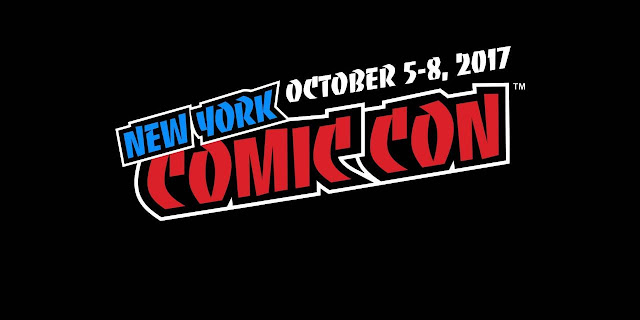 We're headed to New York City next week, to bring you all the excitement from New York Comic Con!

DC has just released its full schedule, that includes an expanded look at the Justice League VR Experience and new products tied to the film.

Make sure you're following us on our social media for up to the minute updates from the convention.

BURBANK, Calif. (September 26, 2017) – DC Entertainment returns to New York Comic Con with an expansive schedule of panels, talent signings and celebrations highlighting DC’s iconic characters, best-selling titles, and the most acclaimed writers and artists in the industry. Taking place Oct. 5-8 at the Jacob Javits Center, DC’s massive booth in the South Concourse (#1915) will be ­­­the epicenter of New York Comic Con for can’t-miss fan activities, along with must-see costumes and props from the highly anticipated Warner Bros. Pictures film Justice League, never-before-seen items from DC Collectibles and more.

New for NYCC 2017, the DC booth will also serve as home base for DC All Access, DC’s original digital series. Friday through Sunday from 3-5 pm ET, DC All Access will bring fans a packed program of live broadcast segments featuring more up-to-the-minute news, exclusives and talent interviews than ever before! Fans can catch all the action live on the DC Entertainment YouTube channel and on the DC Comics Facebook page.

The DC booth will have everything the superhero fan needs to make their convention experience complete; guaranteed to have fans’ cell phone cameras flashing and social media feeds updating all weekend long, the costumes of Wonder Woman, Batman, Flash, Aquaman and Cyborg from the Warner Bros. Pictures film Justice League will be on display.

Nearby in the hall’s Crystal Palace, attendees will find an in-depth sneak peek of the HTC Vive version of the Justice League VR: Join the League – New York Comic Con Edition, a film-themed virtual reality experience. Users will be able to use the HTC Vive’s controllers for an enhanced version of the Super Hero simulations.

Always a huge hit with fans, DC’s popular interactive green screen experience returns to DC’s NYCC booth. Throughout the weekend, fans can take home their own photo souvenir from the DC universe, whether they “get their cape on” with DC Super Hero Girls, celebrate the 25th anniversaries of HARLEY QUINN or Batman: The Animated Series, unite with the cast of Justice League to save the world or explore the terrors of the Dark Multiverse with the evil Batmen of DARK NIGHTS: METAL.

For fans of the smash-hit video game Injustice 2, Warner Bros. Interactive Entertainment will have demo stations in the booth to test their fighting game prowess. And no convention experience is complete without plenty of giveaway items to fill up that swag bag! DC will provide fans with plenty of free sampler comic books and catalogs, posters, pins, temporary tattoos, masks and more!

New products spotlighting the Justice League film, Batman and DC Super Hero Girls will be seen for the very first time at NYCC, courtesy of Warner Bros. Consumer Products. It’s a sure bet that any fan will want them for their very own, so DC’s giving them a chance to enter a sweepstakes in the booth to win all of the items on display.

DC’s panels will dive into acclaimed new titles, reveal exciting announcements and showcase some of the most celebrated talent in comics:

The official countdown to the most anticipated series in comics kicks off with New York Times best-selling writer Geoff Johns at the DC DOOMSDAY CLOCK panel. Moderated by TIME magazine book critic and celebrated author Lev Grossman (The Magicians), this panel features a rare look at the incredible art from Johns’ longtime collaborator Gary Frank as this 12-issue series brings the DC and Watchmen universes together for the first time. This can’t-miss panel also will reveal pages from the debut issue before it hits shelves on November 22, with Johns and Grossman discussing in depth how it all began. Fans not attending the con will also have the opportunity to learn about what Johns and company have in store, as the panel will be streamed live to the DC YouTube channel and the DC Comics Facebook page. Friday 6:00 pm, Main Stage.

The best-selling team behind DARK NIGHTS: METAL, Scott Snyder and Greg Capullo, will share what’s to come in the series currently rocking the industry at the DC Metal/New Age of DC Heroes panel. Joining them will be contributors to the New Age of DC Heroes: writers Steve Orlando, Justin Jordan, Frank Tieri, James Tynion IV, Robert Venditti and Joshua Williamson will discuss not only the secrets of the Dark Multiverse, but some of the all-new heroes spinning out of DARK NIGHTS: METAL, creating even more excitement in the DC Universe! Friday 2:45 pm, Room 1A21

Celebrate Milestone Media, the groundbreaking imprint known for diversity and representation, when The Return of Milestone’s Dakota Universe and the Launch of Earth M takes center stage. The panel will include producer/director Reginald Hudlin and Milestone Media’s co-founders Denys Cowan and Derek Dingle, who will discuss the debut of Earth M, along with Kyle Baker, Ken Lashley, Alice Randall, Greg Pak and DC Publisher Jim Lee. Special guest Robert Kirkman will also be on hand to get fans reacquainted with the heroes of the Dakota-verse, with an inside look at an episode of Kirkman’s upcoming AMC documentary series, Robert Kirkman’s Secret History of Comics, spotlighting Milestone and its impact on comic book storytelling.Thursday 4:00 pm, Room 1A21

Kick off the con with DC publishers Jim Lee and Dan DiDio for DC's Meet the Publishers panel. Be there to hear breaking news and some of the biggest con announcements straight from the publishers, along with an inside scoop on the New Age of DC Heroes, DC Universe, Vertigo, DC’s Young Animal, MAD and more. Thursday 1:30 pm, Room 1A21

The Dark Knight returns to Gotham City for the DC Batman panel. With a lineup of Bat-talent including Tom King, Cully Hamner, Sean Gordon Murphy, Tony Patrick, Scott Snyder and James Tynion IV, find out why the iconic superhero is hotter than ever and see what’s in store for the World’s Greatest Detective. Saturday 1:30 pm, Room 1A06

MAD, the country’s #1-selling humor magazine (in a field of one) is dumber than ever! Join MAD magazine editor John Ficarra and art director Sam Viviano at the Mad About MAD panel, along with a host of the magazine’s greatest talent—Nick Meglin, Teresa Parkhurst, Tom Richmond, Richard Williams, plus a few surprises—in a celebration of MAD’s history of hilarious humor and satire. Friday 12:30 pm, Room 1A21

Home to the most iconic characters and pop culture history, the DC Universe has been restored with hope and optimism, engaging storylines and dynamic characters. At the DC Universe panel, discover what’s to come with the writers and artists bringing these celebrated characters to life, including Mirka Andolfo, Juan Ferreyra, Jorge Jimenez, Emanuela Lupacchino, Steve Orlando, Tim Seeley, Dan Sampere and more! Sunday 11:00 am, Room 1A24

Graphitti Designs will once again carry highly collectible, exclusive variant comic books available for NYCC attendees only, both in the DC booth and their own booth in the main exhibit hall (Booth #1744).

Check out the DC All Access mobile app for a complete list of panels, a schedule of signings, behind-the-scenes coverage and in-depth interviews directly from DC All Access. The app is available as a free download at the Apple App Store or the Google Play Store.

DC Entertainment, home to the iconic brands DC (Superman, Batman, Green Lantern, Wonder Woman, the Flash, etc.), Vertigo (Sandman, Fables, etc.) and MAD, is the creative division charged with strategically integrating across Warner Bros. and Time Warner. DC Entertainment works in concert with many key Warner Bros. divisions to unleash its stories and characters across all media, including but not limited to film, television, consumer products, home entertainment and interactive games. Publishing thousands of comic books, graphic novels and magazines each year, DC Entertainment is one of the largest English-language publishers of comics in the world.
Posted by Blog Administrator