Henry was a guest on The Rich Eisen Show while promoting Mission: Impossible Fallout in Los Angeles, and his lengthy (and really cool) interview is now online. He talks about how he became a Kansas City Chiefs fan, his love for Rugby, whether he could outrun Tom Cruise and much more!

Faster than a speeding bullet. More Powerful than a locomotive…#TheManofSteel #HenryCavill flew into the studio today to talk his new film #MissionImpossibleFallout and what it’s like working with #TomCruise...how he became a @Chiefs fan...and if #JamesBond is in his future. pic.twitter.com/J5gk6KDl7t
— Rich Eisen Show (@RichEisenShow) July 27, 2018


BTS of @henrycavill during his appearance on the @richeisenshow via their IG story. Full interview where he talks how he became a @chiefs fan and *much* more (link in bio) bit.ly/2mL6y7q #henrycavill #missionimpossible #promo #losangeles
A post shared by Henry Cavill News (@henrycavillnews) on Jul 26, 2018 at 4:08pm PDT


Henry also stopped by Yahoo to have a chat with them. Watch below.


Superman himself came to visit us 💪🏼 Thanks for stopping by and talking all things #MissionImpossibleFallout with us @henrycavill
A post shared by Yahoo Entertainment (@yahooentertainment) on Jul 26, 2018 at 7:42am PDT

Henry Cavill on the craziest stunt he does in 'Mission: Impossible' – and the one Tom Cruise wouldn't let him attempt https://t.co/JPo6hNKSrh
— Yahoo Entertainment (@YahooEnt) July 27, 2018 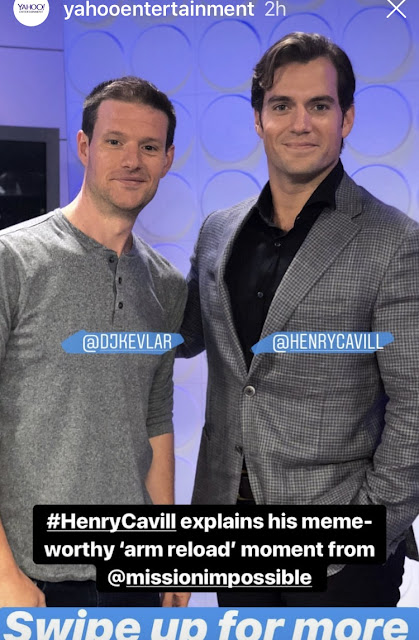