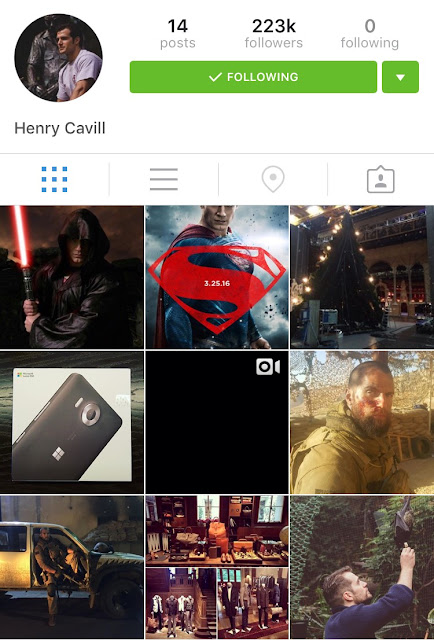 Who would have thought Henry would join social media?

It's our biggest story of the year!

As we welcome 2016, we'd like to take a moment to thank Henry for always being so gracious with his fans.


When we started this blog we knew he was a top guy, and three years later our respect for him has only grown. We've been lucky enough to be able to bring you live coverage from some of his public appearances this year, including the Siam Cup and The Man from U.N.C.L.E. premieres in both London and New York. Because of that, we have gotten a chance to see first hand how kind and accommodating Henry is with everyone he meets. His work as a charity ambassador, has raised key funds for The Royal Marines Charitable Trust Fund and Durrell Wildlife (a big thanks to them as well).


Henry's on screen work speaks for itself, with people praising his performance as Napoleon Solo in this year's The Man from U.N.C.L.E.

After this film, if #HenryCavill isn't the next bond something seriously wrong with the world #ManFromUNCLE #JamesBond
— Davey (james) Cooke (@Daveycooke93) December 29, 2015


It's been a real treat to be able to bring you updates on all of Henry's latest projects. And with Batman v Superman and Sand Castle both coming out in 2016, and Justice League filming in London -- it's shaping up to be another very busy year at HCN. We are very grateful to those of you who help us keep this blog a positive place, with nothing but support for Henry. It means a lot to us, thank you.

Don't forget to head over to Henry's Facebook and Instagram, to leave your New Year's messages for him. Now let's get this 2016 party going!