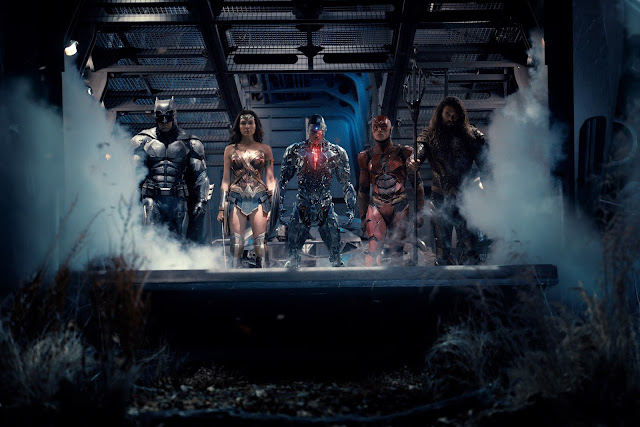 USA Today has released a preview of the films to watch this year, and they include a new image from Justice League.

The paper also talked to director Zack Snyder, who explains how Gal Gadot evolves as Wonder Woman in part because of Superman:


With Superman (Henry Cavill) having laid down his life for Earth, Batman (Ben Affleck) and Wonder Woman (Gal Gadot) recruit a superteam to take on a new threat to civilization in Justice League. “It was all about the filling-out of this massive comic-book pantheon with the biggest and coolest heroes we could,” director Zack Snydersays of his group, which includes seafaring warrior Aquaman (Jason Momoa), speedy Flash (Ezra Miller) and high-tech Cyborg (Ray Fisher). Fans are getting a big character arc for Wonder Woman in 2017, beginning with her solo movie set during World War I. In it, she finds “humanity isn’t always the most kind and awesome thing,” says Snyder, also a producer on Wonder Woman. “It has its moments, but it can be brutal, and her coming to terms with that dichotomy is what we come to learn about her. And in Justice League, she’s fully evolved into someone who’s embraced mankind, partly through Superman’s sacrifice. She’s like, ‘All right, I’ve got to pick it up.’ ”