Get a new look at the #JusticeLeague - prints available in October - Check back soon for details.
A post shared by Justice League Movie (@justiceleague) on Sep 29, 2017 at 8:59am PDT


You know the release of Justice League is getting closer, when our favorite heroes are everywhere you look! (including as Twitter emojis).

Warner Bros. has released a cool set of individual posters (minus Superman) that you can see by clicking through their Instagram post above. Subscribers to Empire magazine are getting this awesome cover for the November issue. 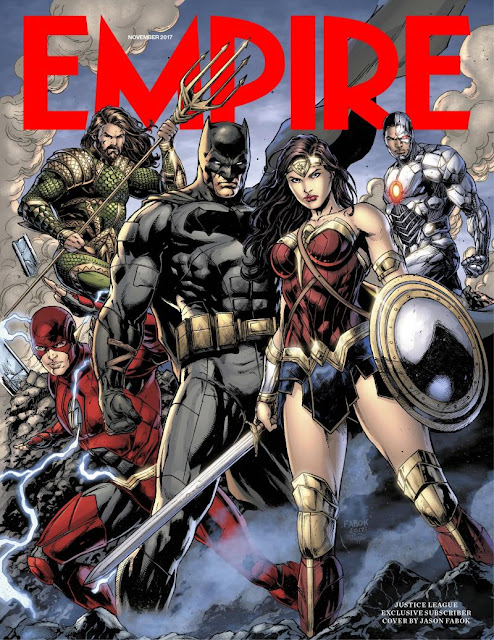 
The Justice League issue of Empire goes on sale next Thursday, with the regular newsstand cover set to be revealed before then. You never know... maybe this time we get a sneak peek at Supes!


A league of their own... Revealed: Empire's #JusticeLeague newsstand cover, on sale from Thursday. https://t.co/lqY2aeOMkU pic.twitter.com/cSzsHliQ9x
— Empire Magazine (@empiremagazine) October 3, 2017

The Justice League promo is now showing up all over the world, including at several conventions.


Is Nick Kyrgios about to become the newest member of the #JusticeLeague? #ChinaOpen
A post shared by China Open (@chinaopen) on Oct 2, 2017 at 12:16am PDT


Stores have also begun rolling out the products tied-in to the film.

Here you are gents this is what you need for your shaving routine #JusticeLeague @_DCWorld @GothamTVPodcast pic.twitter.com/FlvNrlzFLy
— Claire Payne (@GothamiteClaire) September 30, 2017


There is even an advent calendar counting down to a SUPER Christmas.


DC has told Vulture that after Justice League the DCEU will not be the same:

“Our intention, certainly, moving forward, is using the continuity to help make sure nothing is diverging in a way that doesn’t make sense. But there’s no insistence upon an overall story line or interconnectivity in that universe,” DC Entertainment president Diane Nelson says. We saw this approach used in the most recent DC flick, Wonder Woman, which featured a light framing sequence involving emails sent between Batman and Wonder Woman, but no other tie-ins to anything. Nelson loved this: “There were little nods to Batman v Superman, but you don’t need to have seen it. It’s a great stand-alone.”

“The movie’s not about another movie,” adds DC chief creative officer and president Geoff Johns (there are two presidents, but Nelson is Johns’s boss). “Some of the movies do connect the characters together, like Justice League. But, like with Aquaman, our goal is not to connect Aquaman to every movie.”

So we're enjoying Justice League to the max. Just over a month to go!