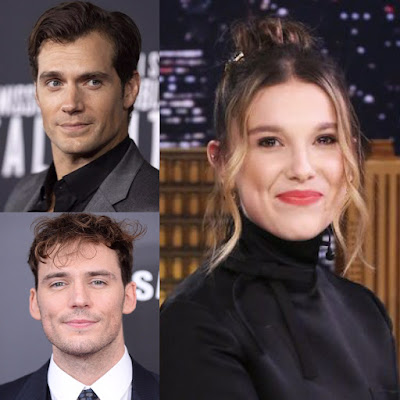 Filming on Enola Holmes is underway in London!

Legendary announced the big news today, as the studio shared details on the plot and those involved both in front and behind the scenes.


BURBANK, Calif.--(BUSINESS WIRE)--Emmy nominee and BAFTA award winning director Harry Bradbeer (“Fleabag,” “Killing Eve”) has begun production on location in London for the mystery adventure “Enola Holmes,” from Warner Bros. Pictures and Legendary Pictures. The starring cast is led by Millie Bobby Brown (“Godzilla: King of the Monsters,” “Stranger Things”) in the title role of Sherlock Holmes’s much younger—and equally intelligent—sister, Enola. Joining Brown is Henry Cavill (“Mission: Impossible – Fallout,” “Man of Steel,” “The Witcher”) as Sherlock Holmes and Sam Claflin as the eldest of the Holmes siblings, Mycroft Holmes (“The Hunger Games” films, “Me Before You”), as well as two-time Oscar nominee Helena Bonham Carter (“The King’s Speech,” “The Wings of the Dove,” the “Harry Potter” films) as the Holmes clan’s enigmatic mother, Eudoria. Written by acclaimed screenwriter and playwright Jack Thorne (“Harry Potter and the Cursed Child,” “Wonder”), the film’s script is based on the popular Enola Holmes Mysteries book series by Nancy Springer, revealing a dynamic untold chapter in the life of the world’s greatest detective and his brilliant family.

When her mother mysteriously disappears on her 16th birthday, Enola Holmes seeks help from her older brothers, Mycroft and the famous super-sleuth Sherlock. But soon realizing they’re less interested in solving the case than in packing her off to boarding school, Enola does the only thing a smart, resourceful and fearless young 1880s woman can do…she runs away to London. There, she begins her own remarkable crime-solving career, always keeping one step ahead of Sherlock.


We already got a glimpse at Millie Bobby Brown on set today.

Sometimes when you’re walking to work in London, you stumble into a different era (they are filming a spin-off to Sherlock Holmes about his sister, Enola). pic.twitter.com/ocWRJKhbHj
— Brian Klaas (@brianklaas) July 22, 2019

Now we're just waiting for Sherlock to join his little sis in London!

Look for the latest news on Enola Holmes as it comes in.
Posted by Blog Administrator