The Witcher was a huge hit at Comic-Con and online, after the release of the first teaser for the Netflix fantasy series based on the books by Polish writer Andrzej Sapkowski.

The thousands of fans packed into Hall H last Friday, gave a very warm welcome to Henry, Anya Chalotra, Freya Allan and showrunner Lauren S. Hissrich. Later, we got a chance to participate in roundtable interviews with Anya, Freya and Lauren (Henry couldn't make it).

Here is the first transcript, from our group's interview session with Anya, who plays the fierce Yennefer of Vengerberg.

How does it feel to be at Comic-Con?

Anya: The essence of The Witcher... which lives on in our version as well, which is the adventure and the fantasy and the magic. I think something we've focused on in our story is that element of family and heart and we focused on the two female characters... you know Ciri and Yennefer, we've given them... we've given Yennefer a backstory. We don't just meet them through Geralt's path, they have their own story from the beginning so that's what's exciting.

Characters can often misinterpret Yennefer and her very complex personality. How do you view Yennefer as a character? and how do you try to portray that on screen?

Anya: Hmmm, because I was given the opportunity to play Yennefer from 14 years old, I was able to live her life experiences or the life experience newly written up until the moment we all know that harsh exterior. So, I got to know all her vulnerabilities and what makes her this person and yeah, to be given the opportunity to play that on screen was a gift.

When you auditioned for the role, what made you think, "I really want to play this character?"

Anya: My favorite part was being able to discover all those layers underneath what we know Yennefer as, you know where we meet her. That was my favorite part. My favorite person to work with? that's really hard, I can't say that (laughs). I don't think I have one (...) But I'm not even joking, everyone in the cast is a beautiful human being. So, it's amazing to make something like this with those people.

What are some of the challenges of working in fantasy?

Had you read the books before?

Anya: I hadn't, I hadn't read anything before my audition and then I read the audition and completely immersed myself in the first two short stories. I couldn't read on, well I did read on but very slowly because I was, at the time the script was my bible and I got totally confused when I was reading them side by side. So I'd go to the director and I'd be like, "hold on a minute this is from... I can't..." so I stopped and focused on the script. But I haven't read them all and it's kind of nice I'm discovering Yen as we go, at the moment. But I'm still finding my process.

How was it working with Henry and how did you guys bond on set?

Anya: How did we bond?  It was great working with him. Like, I was so excited to meet him because this is such an iconic relationship. Uhm, he's very humble and dedicated and such a fan of the work and it's so amazing to be working with someone so enthusiastic and dedicated to bringing the Geralt that everyone knows and loves to the screen. And bonding on set? yeah, he's... you can't not bond with him, he's a wonderful human being.

Did he bring his dog to set a lot?

How do you think the love/hate relationship between Yennefer and Geralt is going to play out on screen compared to the books?

Anya: I hope we stay true to the books. But, uhm, we kind of figured it out as we went along in filming. I feel like, their relationship is so complicated and even in those moments where, you know where Yennefer is being completely rational and, and, and... selfish? or harsh towards Geralt... it comes from a place of love, like you said, so yeah... we do explore that love/hate relationship on screen and hopefully you'll see that.

Is there anything you can tease about the season premiere?

Anya: No. No, I'm gonna stop there because I'd love to... and if I look into your eyes long enough (laughs).

Is there a particular moment that you are the most proud of, in this show?

Anya: Oh my God... I, even you asking me that question, I'm tearing up. I'm not even, I'm not even joking... when I watched that trailer (sighs)... that I'm just proud of anything that comes out from that one, to do with The Witcher. Because blood, sweat and tears went into that... from every single person and I can't tell you, I'm just so proud.

What was the craziest experience behind the scenes? because filming can be ridiculous sometimes. What was the most extreme or hardest time you had?

Anya: It was playing Yennefer at the beginning of her life. I'm still figuring out my process and I invested totally in that journey and I took that home sometimes. So that was hard.

So, we get a backstory now on Yennefer and how she became the woman that she is. Is there a part of her history that you're excited for fans to understand?

Anya: Yeah, what makes her who she is. Yeah, the fans go on the journey of her childhood with her and the backstory and you know, she'll touch hearts 'cause... she's amazing. 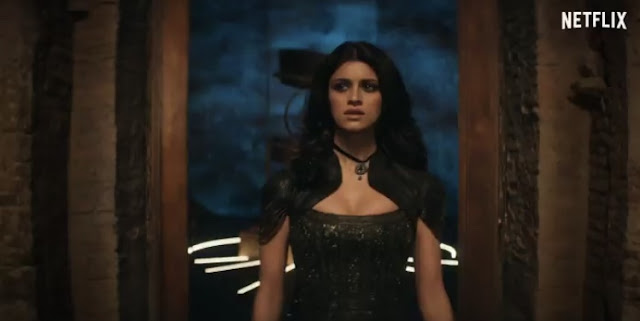 The Witcher is coming to Netflix this fall.

Look for the interviews with Freya Allan (Ciri) and Lauren S. Hissrich in the coming days.

Thank you to Netflix for allowing us to participate in these roundtable interviews at Comic-Con and to Anya, Freya and Lauren for their time.
Posted by Blog Administrator