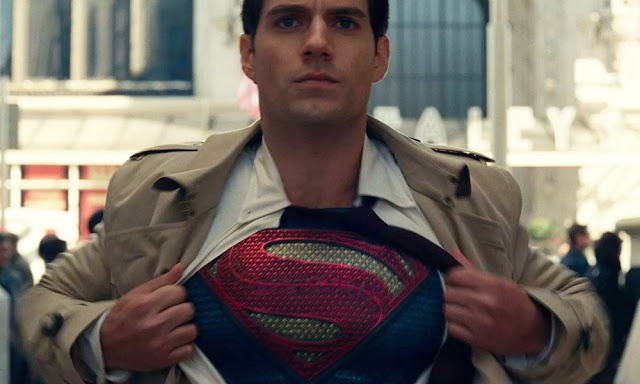 I still can't believe I ran into Henry Cavill and HE talked Superman and video games with me for a long time. Unreal! The guy is a class act! #manofsteel #superman #sdcc #sdcc50 pic.twitter.com/iM5pHgE6B0
— Roger Roecken (@i6Hitman) July 22, 2019

It's hard to not talk Superman with Henry when he's standing across from you, looking and acting exactly like you'd expect Clark to act like. Roger met him during Comic-Con over the weekend and after sharing his photo, he also talked about the conversation the two of them had about Henry's potential return to the role.


He said he still wants to play superman. Wants a sequel to Man of Steel. Wants to explore how it effects someone with absolute power, so many stories to tell what makes him tick
— Roger Roecken (@i6Hitman) July 24, 2019

While that might have been some late night bar talk, now Chinese movie site MTime has published its interview with Henry at Comic-Con. They also asked him about his future as Superman.

@HenryCavill sat down with Mtime at @ComicConInternational to talk about #TheWitcher, #EnolaHolmes, and said that he’d reprise the role of Superman IF he got invited back. Read more on Mtime.com

Gavin translated that part of the interview for fans.

HC - (paused and smiled) Am I? Everyone is always superman. I'm the one——Here(pointed at his heart)

Mtime - I mean, would you play him again?


As excited as we are for Henry's current projects, we're also very hopeful he does fly again as Superman... time will tell!

In the new interview Henry is also asked about his role in Enola Holmes and his answer will leave you wanting to learn much more about the character.


Here is MTime's Q&A (keeping in mind that it's a rough translation via Google):

Mtime: Please tell us about The Witcher. Some people may not know anything about the novels and the games. Can you introduce them to everyone?

Henry Cavill: What is the reason for everyone to follow this series? In addition to depicting the dwarves, elves, demons, and singular magic that appear in magical dramas, the great thing about The Witcher is that there are many elements of the real world, many of which exist in the real world, such as racism. Social justice and colonialism are all throughout.

These topics are very heavy, so the audience does not have to be a magical fan, everyone can understand the story. This is what makes this drama special – there is no such “heroism.” All characters live in a gray area, with no black and white. For me this is the interesting part of the show.

Mtime: What made Geralt make this choice? What factors motivated him?

Henry Cavill: The wizards in the play, they used to be mostly abandoned people. These children lived in sewers from an early age and could only survive on their own. They are very tough because they have to undergo a variety of human chemistry experiments and have to go through a series of tests, which is a big challenge for adults, let alone children.

Children who pass the test will also experience the so-called "green grass trials", they have to drink a special kind of mixed potion, and then magic works on them. Only one in ten children survive.


But Geralt was even better than that one-tenth, so they tortured him with all kinds of potions and magic. This is why Geralt is pale and has a white hair.

Interestingly, although he seems to be a person who doesn't care, and it's hard to get along with, in fact, Geralt has the spirit of a white knight.


However, he is very cruel and seriously lacking in love. His actions are actually caused by the real world. But deep inside he still hopes that the world can be different, which directly affects many of his practices and motivations for handling things.


Mtime: Geralt is a hunter. When you were a child,  were you ever scared of monsters?


Henry Cavill: (laughs) I'm never afraid of the dark, and I'm not afraid of things like monsters at the bottom of the bed. I think the devil and the monster actually come from how you see yourself. Just like Geralt. I also lived with a very open heart, and later encountered some difficulties, the solution is actually only accepting reality.


Compared with other young people who are also trying hard to be accepted by society, I have not encountered more difficulties than accepting reality. But I think that is also my heart. Even though I have done my best, what else do you think I still see in me (??) - just like the story of Geralt.

He wants to be a white knight, but the world spits at him. Even so, he still works as his white knight. So then again, my demons are not specific people or things, but what kind of rewards and results I exchanged after my efforts.


Mtime: In the past 6-8 years, with the rise of streaming media companies beginning to enter the content market, the disruptive revolution has become a hot word in the development of the television industry, and Netflix's business has covered the world. What I want to know is how much your relationship and enthusiasm for this role is related to "Netflix?" If you are the same character and episode, but made by the network or cable TV channel, will you have the same degree of commitment?

Henry Cavill: Regardless of the play, where the character came from, I will pick it up. I am very interested in this work that describes the adventures. I spent a lot of time watching sci-fi or magical novels and playing similar games. So this should explain my true thoughts on this issue. Before I took the show, even before I started reading the related books, I started playing this kind of game.


Henry Cavill: Yes. I usually have a very busy life. It is very difficult for me to watch what I watch every week. I try to let myself take a day off, then I can watch what I can see, or watch a movie. Therefore, the crazy chase is quite like the style of my work.


Mtime: I know that you are currently involved in the filming of "Enola Holmes" , you play Sherlock Holmes, the brother of Millie Bobby Brown who plays the lead. What is the difference between this classic character and the character created before?


Henry Cavill: I don't want to spoil it, but it's really different. Millie plays Enola Holmes, as you said, she plays my sister. This story revolves around Enola, and Millie will have a wonderful performance. And I play Sherlock Holmes, like a perfect mirror, mapping out the extraordinary wisdom of Enola.


Mtime: The last question, are you still Superman?


Henry Cavill: (Stop pause, smile) Am I still Superman? Everyone will always be Superman. I am a real Superman - he lives here. (pointing at his heart with his finger).

Mtime: I mean, will you continue to play Superman?

Henry Cavill: Of course! If they invite me.