Durrell Fundraiser: Henry To Be Special Guest At Siam Cup 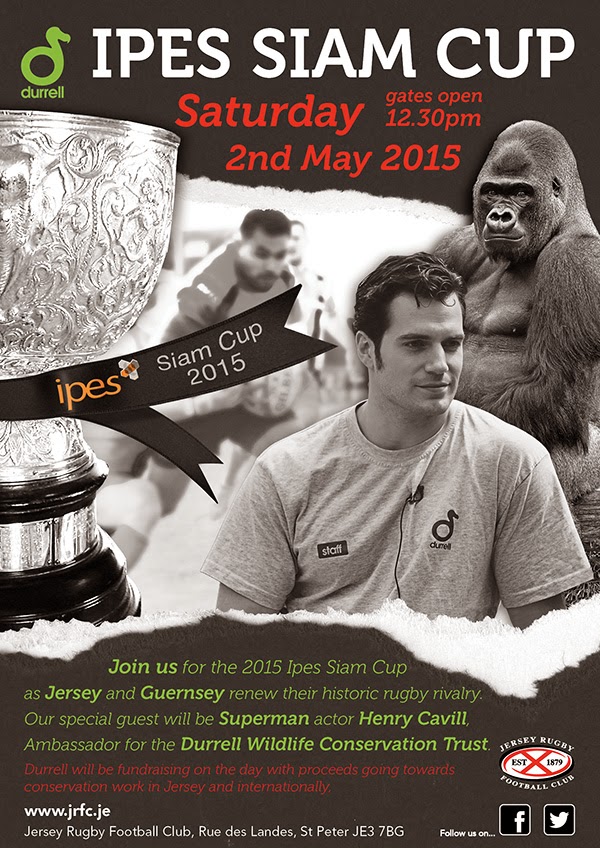 We just got word that Henry will be attending the Siam Cup in Jersey, in support of Durrell Wildlife. Read the official press release with his statement. Much more to come!

One of Jersey RFC's best-known fans will be the VIP guest at the club's final game of the season, the annual Siam Cup clash against Guernsey on May 2nd. Superman actor Henry Cavill will be at St Peter in his role as an Ambassador for the Durrell Wildlife Conservation Trust, which is the focus of a major fund-raising day coinciding with the Ipes Siam Cup. Henry was announced as Durrell's first-ever Ambassador last August, stepping up to underline his personal enthusiasm for conservation by agreeing to support the work of Durrell both on his home Island and globally. He will be involved in a busy day that will include charity auctions for items such as exclusive tours of the Durrell Wildlife Park, signed prints and rare merchandise, a bucket collection and a chance to meet supporters.The Siam Cup's history dates back to 1920 and the trophy is competed for annually as the finale to the rugby season in the Channel Islands. This year's event, sponsored for the second time by specialist fund administrator Ipes, will feature four matches as the Caesareans host their Sarnian rivals in three men's matches - 1st team, 2nd team and Veterans - and the Ladies Siam. Commenting on the event, Henry said: “Being a Rugby fan and someone who is keen on protecting the wildlife of this world (rugby players included) what better place to be than at the Siam Cup with Durrell Wildlife Conservation Trust? It sounds like it’s going to be a fantastic event! So I hope to see you all there. You'll find me about the grounds and clubhouse throughout the day, hopefully with a pint in hand!”

Jersey Chairman Bill Dempsey said he was delighted that Henry had accepted the invitation to attend the Siam Cup day. We've been hoping that Henry would be able to find room in his busy schedule to make it back to his home rugby club, he said. We're anticipating a big crowd, a fantastic atmosphere and the chance to raise some serious funds for the Durrell Wildlife Conservation Trust, a cause that is very close to his heart.

Dr Lee Durrell, Honorary Director of the Durrell Wildlife Conservation Trust, said: We are overjoyed to learn that our wonderful ambassador, Henry Cavill, will be in Jersey soon helping Durrell once more on home ground. We couldn't have asked for a more supportive, dedicated person to have made us his charity of choice. Tickets for the Ipes Siam Cup, priced £10 for adults are now available from Jersey RFC or via the JT Rewards website. Admission for JRFC members is £5, while under 18s will be admitted free.


We'll continue bringing you updates as we get closer to the event. In the meantime make sure to check out cavillconservation.com, where you can keep up with Henry's latest posts. While there you can also join Henry's gorilla family, by purchasing an adoption package that includes a signed pic by him. There are various options for you to choose from -- all benefiting the charity, so check them out!
Posted by Blog Administrator