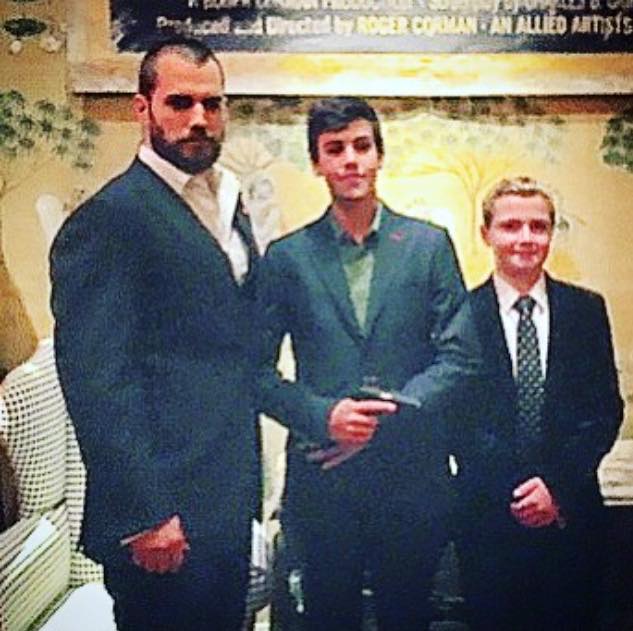 "Ozi136: Thanks @Max.120 for inviting me yesterday. Had a great time and got a pic with Superman aka Henry Cavill after Spectre."

Looks like the future Bond just got to watch 007 do his thing!

Thanks for sharing your pic.

Earlier this week, we told you about a fan who also had a chance encounter with Henry, and that same day Chris got to meet him as well. He posted his story on Henry's facebook:

A post to all the fans, I met Henry Cavill in Cambridge yesterday while working as a tour guide in the city, and he took time out to chat and take a pic, what a true Gent, thanks Henry, u have a discount tour with the dog on me anytime, Good luck with All your future film projects, Best Chris.

That's why we are so proud to support him!

Henry will soon be headed to Jordan to join the crew of Sand Castle, so look for updates on that.

P.S. The buzz cut and the suit working well together Captain Syverson ;)

UPDATE: The art director for Sand Castle, has been posting photos of the work involved in getting the sets ready for filming and everything is looking fabulous. If you want to learn a lot more about the script, screenwriter Chris Roessner talked extensively about it during an interview he did a couple of years ago. We highlighted some of it, including the part where he mentions Saddam Hussein in a previous wrap -- so check it out.

We also got a couple of updates from Henry's costars. We can't wait for him to get to Jordan!

Email ThisBlogThis!Share to TwitterShare to FacebookShare to Pinterest
Labels: Being Nice Is The Sexiest, Lucky London, Suit Love