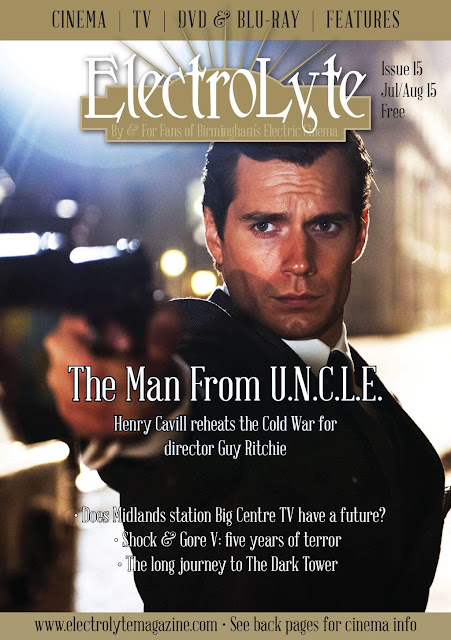 Here's Henry Cavill looking all debonair on the front cover of our next issue (July/August), out next week pic.twitter.com/d8kNYcyGFv
— Electrolyte Magazine (@ElectrolyteMag) June 23, 2015

The Man from U.N.C.L.E. promo has finally arrived, and all of a sudden we're surrounded by Solo everywhere we look, and we are loving every second of it!

Just in the last 24 hours we heard about Henry's cover and exclusive interview for SFX magazine that comes out tomorrow, and we also got a new Solo poster with the "CIA's Finest"  ;)

And Warner Bros. seems to know us, and our love for gifs well..


Plus the posters in different languages are so cool to see!


But the best part, has been seeing your awesome Solo fan art, and your support for Henry in this film..

Just done a variant of the #henrycavill #manfromuncle picture i did yesterday. more inline with the colour scheme of the movie posters. #napoleansolo #art #picoftheday #artist #digitalart #movie #style #mangastudio5 #surfacepro3 #themanfromuncle
A photo posted by Matt Swan (@mattlex) on Jun 11, 2015 at 4:52am PDT


Here's that other image Matt mentions in his post.


We are so. not. crafty.. but can't pass up the chance to make ourselves one of these beauties!

Inspired by film and TV? Create a custom pendant using ICE Resin, a bezel, and images from the film or production. See how this pendant was created at http://iceresin.com/icequeen. Clickable link in profile. #themanfromUNCLE #iceresin
A photo posted by ICE Resin (@iceresin) on Jun 22, 2015 at 11:12am PDT


Thanks also to everyone who comments and sends us news tips and pics. Please know that everything you do is deeply appreciated, as we try and support Henry in everything he does.