The Action, The Comedy, The Style: New U.N.C.L.E. Trailer Is Here! 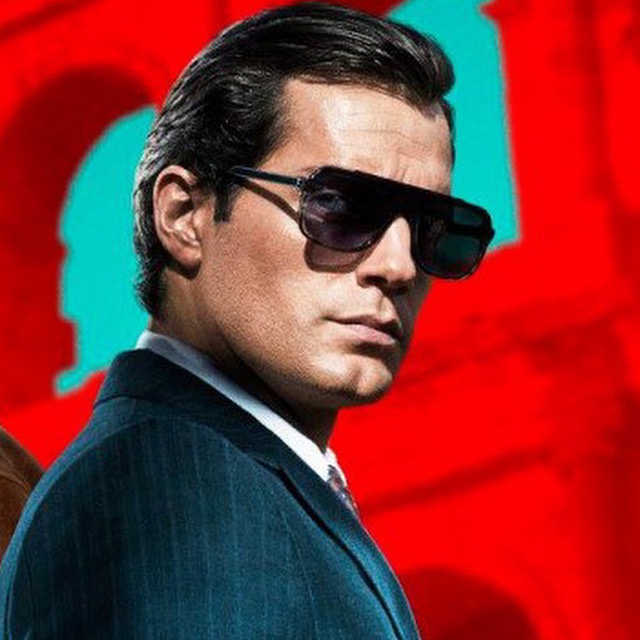 The new The Man from U.N.C.L.E. trailer is here!

Take a look at what awaits us come August 14..

Saving the world never goes out of style. Watch the new trailer for @realguyritchie’s #ManFromUNCLE. https://t.co/35STYaH5kX
— The Man From UNCLE (@ManFromUNCLE) June 11, 2015

A stylish new #ManFromUNCLE trailer is out today, just in time to add some swinging '60s to your #TBT: http://t.co/XzdquGAjkH
— Jared Harris (@JHarris_UK) June 11, 2015

“Things might get a little messy.” @realguyritchie will make you cry UNCLE in this exclusive #ManFromUNCLE trailer. http://t.co/TK6LG0wziz
— iTunes Trailers (@iTunesTrailers) June 11, 2015

Daniel also confirms, that pretty much all the music in the trailer is his!

@tracksounds YUP. Pretty much everything that doesn't have Nina Simone singing on it :)
— Daniel Pemberton (@DANIELPEMBERTON) June 11, 2015

What the press is saying:

What could be so dangerous that it brings Russian and American spies together at the height of the Cold War? As a new trailer for this summer's revival of the classic TV series reveals, nothing less than potential atomic apocalypse — which makes it a good thing that The Man from U.N.C.L.E. has Superman (Henry Cavill) on its side.

This trailer shows off a big, sexy, and fun spy thriller that very much seems to be in the vein of Ritchie’s Sherlock Holmes films. The rapport between Hammer and Cavill appears strong, and there’s an added draw now in the form of Ex Machinabreakout Alicia Vikander as the film’s female lead. I like the tone and bombast on display here, and visually Ritchie looks to have found an interesting palette, so I’m looking forward to seeing how the full film holds up.

Henry Cavill does his best James Bond in heart-pounding trailer for The Man from UNCLE.

The new trailer for Guy Ritchie's forthcoming thriller starring Henry Cavill has arrived. A master of the finely constructed action thriller, Guy Ritchie appears to be on top form with his latest film, The Man from U.N.C.L.E.

In this summer’s reboot of the 1960s spy thriller The Man From U.N.C.L.E., Henry Cavill ditches the Superman suit for a clean-cut tuxedo as CIA agent Napoleon Solo. He teams up with KBG operative Illya Kuryakin (Armie Hammer), but as seen in the second trailer for the film, released Thursday by Warner Bros., the two don’t start off as friends.

Elizabeth Debicki and Alicia Vikander’s trendy characters embrace the Cold War danger and spy gadgets, and prove ready to face off with Napoleon and Illya. But it looks like the group pairs off, as some sexual tension gets mixed in with the hand-to-hand combat.

Filled with psychedelic fashion, fight scenes on land and sea, and Hugh Grant as the guy controlling the game, Guy Ritchie’s U.N.C.L.E.  promises to be a high-stakes Cold War adventure.

It's not like the mismatched partner trope hasn't been done before, but Cavill and Hammer look convincing enough to play Get Smart totally straight-faced.

Written by Ritchie and Lionel Wigram, the project stars Henry Cavill (Man of Steel) as the CIA agent Solo and Armie Hammer (The Lone Ranger) as the KGB operative Kuryakin.

Judging from the trailer, there will be plenty of ‘60s spy aesthetics, which also appeared earlier this year in frequent Ritchie collaborator Matthew Vaughn’s Kingsman. Also, Alicia Vikander (Ex Machina) and Elizabeth Debicki (The Great Gatsby) are on hand to offer some of that classic movie chic sheen to the proceedings. Oh, and Hugh Grant is in it as a spymaster. What more can you want than that?

As Napoleon Solo and Illya Kuryakin, Cavill and Hammer are both in their element. Dodging bullets, engaging in a lot of innuendo, and generally making it look all-too-easy being a spy; Ritchie’s penchant for buddy action camaraderie has clearly rubbed off on this pair. Step aside, 007....

While the first trailer was heavy on the action and the odd coupledness of Illya Kuryakin and Napoleon Solo, this new trailer is all about the double entendres. Between the agents and the civilian. Between Napoleon and the villain. Between Illya and Napoleon.

“It’s in and out, no mess. And we both forget about it in the morning.” “Get to know each other more intimately.” “So sorry I can’t stay to finish you off myself.” “What are you doing down there?” “Trying not to get lost.” “All turned on now.” So. Many. Sexual. Innuendos. If you drink every time one happens, this three-minute trailer will kill you.

I’ve been pleasantly surprised by these trailers so far. It’s been a long time since one of these classic ‘60s spy-fi shows was made into a good movie. (The Avengers still hurts my soul on a deep, deep level.) But this keeps looking good! And like it’s got a handle on the source material in the inclusion of a civilian on the mission. But, I really hope they mean that the organization has a new code name as “UNCLE” and not that Napoleon has a codename “Uncle.” That... would be sad.

With the Bond series firmly committed to reinventing 007’s mythos in a contemporary setting, Guy Ritchie is going back to where our fascination with spycraft began—the ‘60s, when the coolest spy on the small screen was The Man From U.N.C.L.E.

Henry Cavill looks cool, calm and collected as American agent Napoleon Solo, a role originated by Robert Vaughn. In the film, Solo is forced to team up with KGB agent Illya Kuryakin (Armie Hammer) on behalf of the United Network Command for Law and Enforcement. A criminal organization (unnamed here, but probably THRUSH, the baddies from the original) has a loose nuke, and, being secret agents and all, it’s up to our heroes to stop it.

There’s nothing new here, but at the same time, who needs new when you’ve got all the classic spy-movie accouterments: gunfights, fistfights, speedboats, quips, various femmes fatale (Alicia Vikander and Elizabeth Debicki), and loads of swinging ’60s style. Jared Harris and Hugh Grant are also on board as Solo’s superiors. With that kind of casting, your enjoyment will probably hinge on whether you love or hate Ritchie’s flashy style.

More trailers need Nina Simone, at least if they want to win me over. I don’t care if The Man From U.N.C.L.E. winds up being any good. I can just watch the latest (UK) trailer. If the movie does turn out to be a smash, then all the better. It will provide more proof that 2015 is the year of the (good) spy movie resurgence. Not only do we have a new James Bond installment this fall, but there’s also Steven Spielberg’s Bridge of Spies. And comedies like this one that sort of link that latter serious effort and the goofiness of the current box office hit Spy.

Like Bridge of Spies, Guy Ritchie‘s The Man From U.N.C.L.E. is set in the 1960s and concerns the Cold War, though the comedy deals with a greater and sillier cooperation between American and Soviet intelligence. Like Spy, The Man From U.N.C.L.E. features a female villain, here played by Elizabeth Debicki. She has the unfortunate job of following Rose Byrne’s hilarious turn in Spy, but this TV series adaptation may be able to make up for it well enough with the chemistry between Henry Cavill and Armie Hammer.

This looks like it’ll be as much of an ’80s style buddy action movie as ’60s spy film throwback. The current Superman and almost-was-Batman actors also get some help from the It Girl of the moment, Ex Machina‘s Alicia Vikander. The trio have an appealing rapport in these couple minutes that promise something much more balanced than the Robert Downey Jr./Jude Law/Rachel McAdams grouping from Ritchie’s Sherlock Holmes movies.

The Man From U.N.C.L.E. also stars Hugh Grant and Jared Harris and opens on August 14th. I won’t be surprised if this is one of the surprise hits of the summer.

The trailer is replete with speedboats and gunplay — echoing the iconic James Bond movie of the era, 1963’s “From Russia with Love.” The movie opens Aug. 14.

With the release date getting closer, promo is picking up (finally!) -- Don't miss Henry's interview with Entertainment Tonight and IGN. Coming Soon has a slightly different version of IGN's set report and Collider added a few more details (it was a group interview).


Here are some of our favorite moments via @ayami0102 - See more caps. 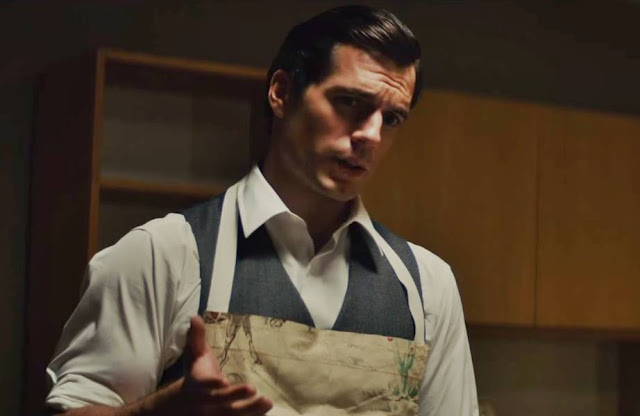 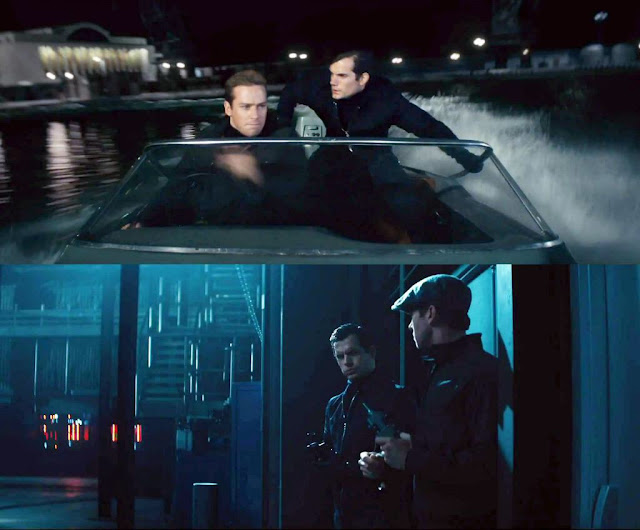 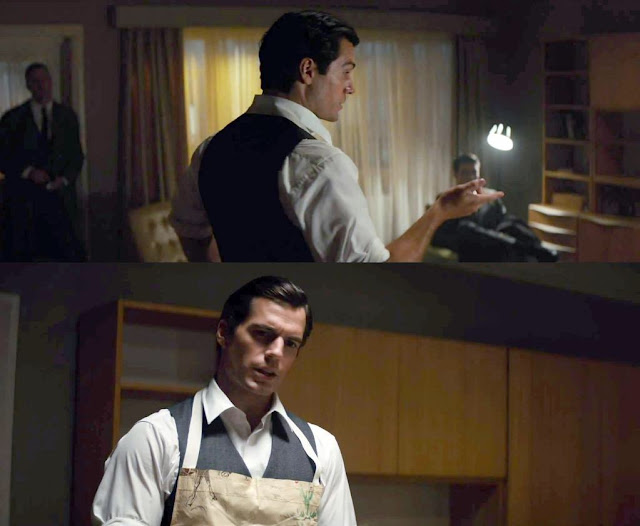 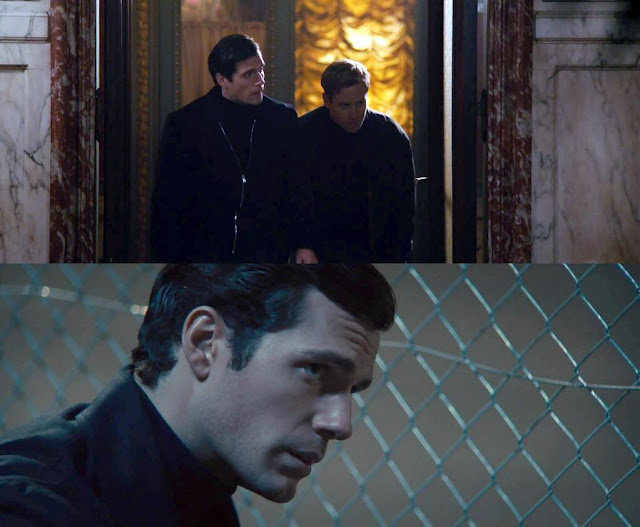 Look for the latest updates on everything U.N.C.L.E., as we count down to Solo on the big screen. Sexy Cavill on the way!

The trailer for The Man From UNCLE is just as kickass as I'd hoped it would be https://t.co/3BWTfhLfVe
— Ahmed Ghazy (@AGhazy) June 11, 2015

@HenryCavillNews @ManFromUNCLE Amazing! Just watched it and I had to pick up my jaw as as my heart from the floor! Bravo Ritchie well done😎
— M. River Santiago (@MayrasRiver) June 12, 2015