All done! Today was a very successful day at the Durrell Challenge. I can't speak for everyone but my family, my friends and I had an incredible time. The weather was perfect, laughs were had and most importantly, money was raised for an important cause. Thank you to everyone for all of your hard work in raising money, thank you to Durrell for organising such a great event and for your continued dedication towards animal conservation. See you all next year?? #DurrellChallenge #DoItForDurrell @TheDurrellChallenge
A post shared by Henry Cavill (@henrycavill) on May 14, 2017 at 10:08am PDT


JustGiving is now accepting nominations for its annual awards, and you know Henry definitely deserves the recognition!

"The JustGiving Awards are our way of congratulating all of the outstanding people, charities and teams who’ve shown incredible commitment to making a positive impact over the past year."


Before and after the commando challenge! Thank you all so much for your incredible support for a charity that is near and dear to my heart. A special thank you to those who ventured all the way to Devon England to take part in the challenge itself. It certainly wasn't easy and your efforts are so very much appreciated! #RMCharity #CommandoChallenge
A post shared by Henry Cavill (@henrycavill) on Oct 10, 2016 at 2:06pm PDT


Henry participated in the Commando Challenge in October to raise funds for The Royal Marines Charity, and just this past May he ran his second Durrell Challenge in support of the Durrell Wildlife Conservation Trust.

You have gotten Henry nominated two years in a row, help us do it again!

All you have to do is CLICK ON THIS LINK and add henry-cavill5 (Durrell Challenge) or henry-cavill4 (Commando Challenge) to complete the JustGiving fundraising address and submit your nomination. Both events qualify to get Henry nominated for Celebrity Fundraiser of the Year. Nominations will close on Sunday, August 6th, with the shortlist set to be announced at the end of August.

Thanks so much, everyone. 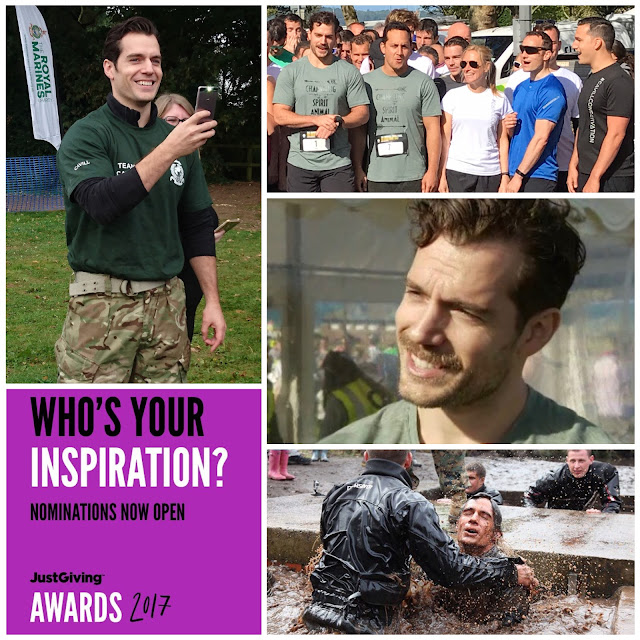