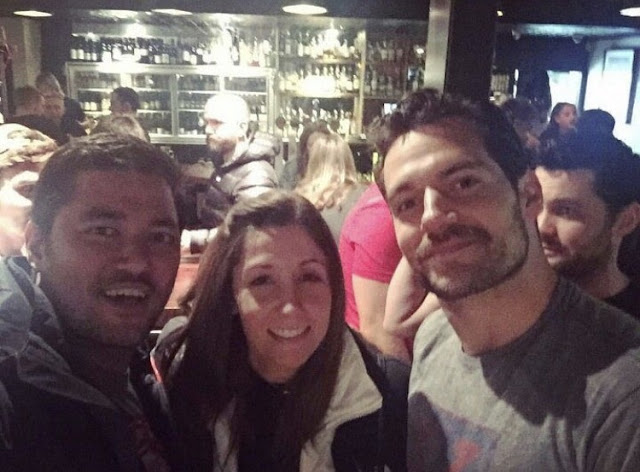 @jlowe84 "Out for dinner on our honeymoon and lucky enough to meet this legend. Thank you @henrycavill for saying hello and congratulating us! What a treat..."

UPDATE 6/26: Jennifer later shared a few more details with us on Facebook, about meeting Henry:

"Seems like he enjoyed watching the Lions win their Rugby game that night. It was really nice of him to take time out for a quick photo. As a gentlemen would, he congratulated us on getting married. Such a genuine guy!"

After what sounds like a super fun weekend training with the Mission: Impossible 6 stunt team, Henry went out in Queenstown where several fans had a chance to chat with him and take pics.

Thanks for posting everyone!

🎶What a man, what a man, what a mighty good man🎶 running into Henry Cavill (Superman) during a night at Queenstown! What a dreamy, handsome dude! Unfortunately the lighting wasn't that great, but at least I got a photo with a supersexy man! #henrycavill #hollywood #superman #queenstown #qt @queenstownnz @beautiful.newzealand #moviestar #photo #outinqueenstown #sexy #dude #handsome #handsomeman #missionimpossible6 #extra
A post shared by Do (@dvhaperen) on Jun 18, 2017 at 3:15am PDT


According to director Chris McQuarrie, this is going to be an exciting week on set. Don't miss the scoop he shared during a Twitter Q&A.