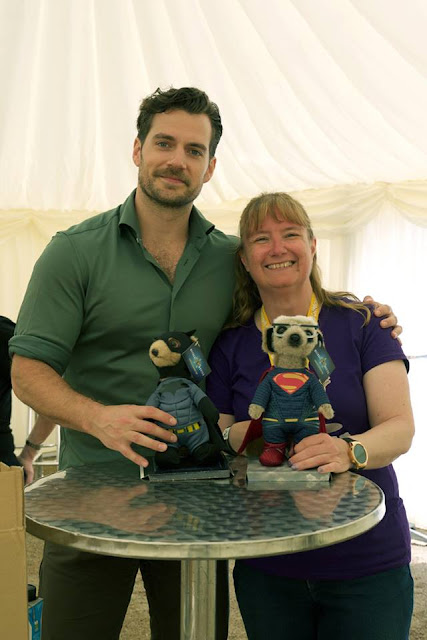 Congratulations to Paula Morrell, who was the top fundraiser at The Durrell Challenge a few weeks ago. As part of her prize she got to spend some extra time with Henry, and you're going to love her story and the exclusive pics she shared with us. Please credit her if you repost.

This year, I made a bold decision, to not only fundraise for The Durrell Challenge, but to also actually do it. I am not disappointed in either decision. The course was tough, but knowing that I was helping Durrell with their conservation efforts, and that the VIP tent was waiting for me at the end, got me through it. There wasn’t enough time in between finishing and the VIP event for changing, or any kind of a proper shower, so a quick cleanup was all I could manage.

The VIP tent was nicely situated in front of the manor house, and inside the foyer of the manor house were drinks, and a wide assortment of tasty hors d'oeuvres, much needed after the 13K course. Henry was out in the tent, talking with the VIP runners who made the £1000 fundraising goal. Two of his brothers and his mother were there, as was Lee Durrell, Gerald Durrell’s widow.

After briefly getting some food and drink, I lined up with my friends for our chance to speak with Henry and get a picture. As I went up for my turn, the staff whispered something to Henry. At that point, I didn’t know what it was, but when I went up to him, he said, “I understand you’re a superhero.” I was a bit confused until he asked if I remembered how much I had raised. That’s when I realized I was the top fundraiser for the VIP runners. He thanked me for the funds (which ended up being a bit over $4600/a bit less than £3600), as it’d go a long way to support the work Durrell does. He thanked me again, and we talked briefly about how the race was, how many dang hills there were, and how the marshals were always saying “that’s the last big hill” even though there were more. I asked if he would sign the BvS poster that I had gotten through the Omaze fundraising for the Royal Marines Charity. He graciously said he would after everyone was finished with their pictures. We then took our pictures, and he thanked me one last time before I walked away. When everyone was done, I took the poster up to the table to give the staff so he could sign it.

I knew there was supposed to be a “surprise” for the highest fundraiser, so I waited around until they started asking everyone to leave. At that I point I asked about it, but the person I asked wasn’t sure, so she said they would contact me, since they had my phone number. I assumed they meant later, like in week or something, so imagine my shock when my phone rang about an hour later and Katie Arden, who handled the fundraising, asked where I was. Since I was still in the park, we met up. She apologized for not having the surprise ready before, but if I came back to the manor house around 3:30, she’d have them for me.

My friends and I visited some of the great animal exhibits while we waited for the time to tick by. Around 3:30, I found Katie at the manor house, and asked if she had the surprise for me. She said to give them a few more minutes. They were finishing up with the Superhero Stroll pictures, and as soon as they were done, she’d “see if Henry would be able to give them to me.” I had no clue what “them” could be, but I knew it meant I was getting to meet with Henry again, only this time there would be a good deal fewer people around.

So I waited, nervously. I wasn’t sure if being one on one with him would make it easier or harder for me to hold a conversation with him. Last year, when I met him during the 2016 VIP event, I was embarrassingly - and literally - left speechless by him. During the VIP meeting this year, conversation was made slightly easier by encouragement from my friends. But now, I was going to have to manage on my own. As Katie came to get me, I took a deep breath and told myself I could do this! LOL!

I stepped inside the tent and the first thing Henry said was “Come here and give me a hug.” Any remaining nervousness melted away at that point. He thanked me yet again for the wonderful donation raised for Durrell and how much he and they appreciated it. He then pointed over to a table where there were two stuffed meerkats, one dressed as Batman and the other as Superman. They were Sergei and Aleksandr of Meerkat Movies, a movie and rewards program offered in the UK. They had a promotional advertisement and stuffed animal campaign for Batman v Superman. Henry explained that they were limited edition stuffed toys from the campaign. They both came with certificates of authenticity, as well. Needless to say, I probably squealed a bit loudly over them. I said that they were both awesome, to which Henry said that the Superman/Sergei was the best. I replied “Well, of course he is!” We both laughed and started to pose with them for pictures. 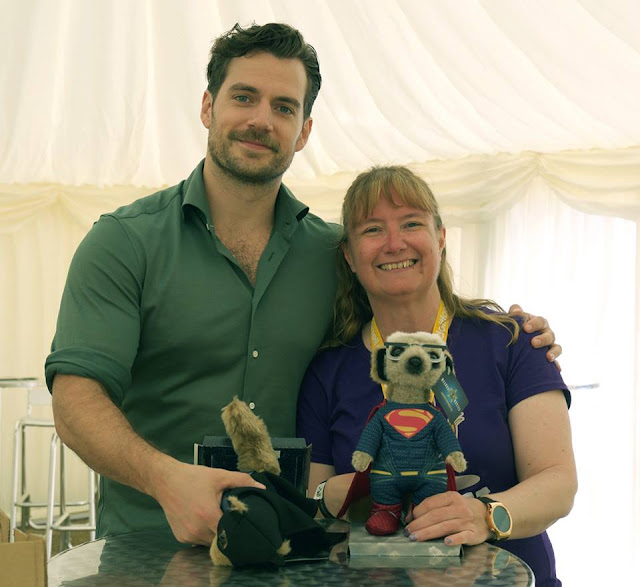 Henry had Batman, and I had Superman. After a couple of pictures, Henry flopped Batman face down on the table. Tiffany, who was taking the pictures, laughed and said that was mean, but continued taking pictures. 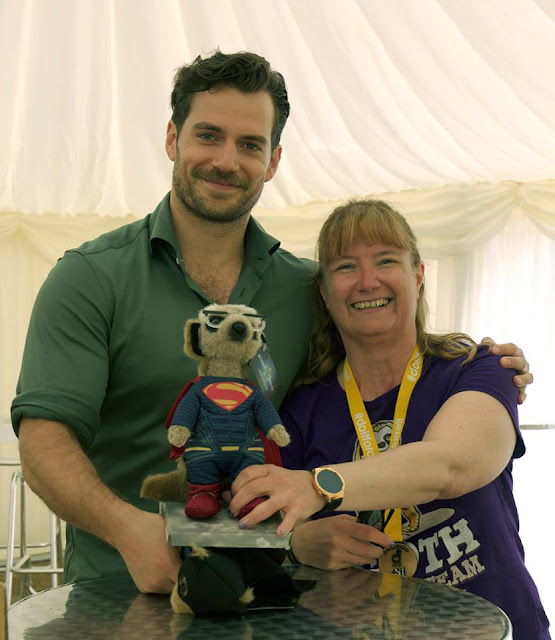 When she’d taken a couple like that, I plopped Superman Sergei on Batman Aleksandr’s head. Henry got a big laugh out of that. After a few pictures of that pose, Henry and I then went over to the side of the tent for just pictures of us. 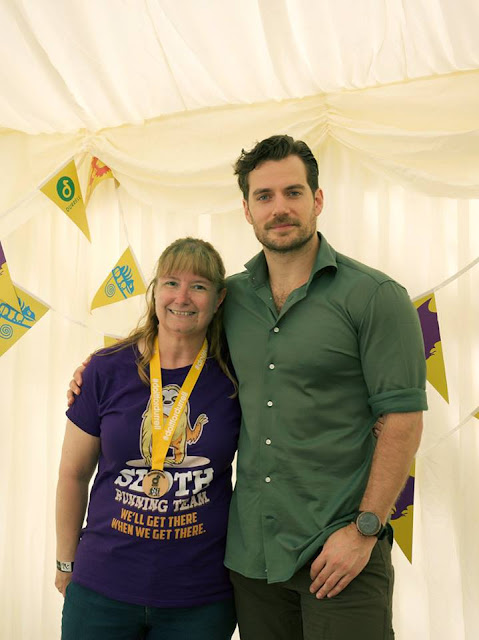 Once those were finished, we went back to box up Sergei and Aleksandr, and talked about how I was going to get them back home to the States with me. At that point, I thought I was going to mail them back. When they were safely packed up, Henry thanked me again, I thanked him, and Sergei, Aleksandr, and I left.

I ended up actually buying a piece of carry-on roller luggage to bring the meerkats back in. I just wasn’t sure I trusted two postal services or the airline baggage handlers with this precious duo.

Thank you, Henry, for taking time out of your extremely busy schedule to not only give them to me, but to have a little fun playing with them with me. It will be something I will not forget. Sergei and Aleksandr now have an honored space with some of my other Superman memorabilia and photos of us from the 2016 and 2017 Durrell Challenges. Hope to see you again for next year’s Challenge! 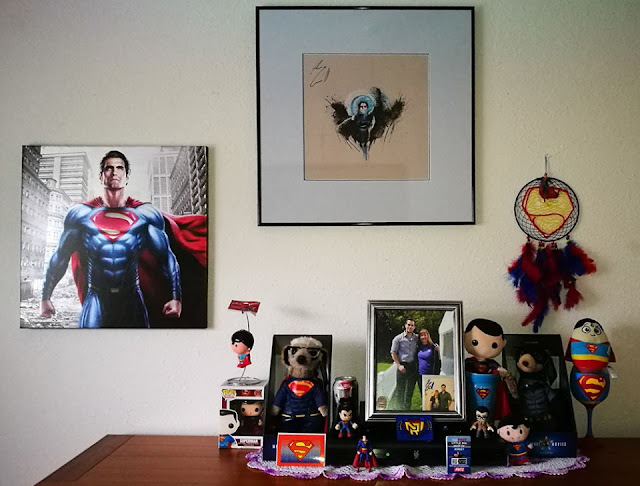 Thanks again to Paula for allowing us to share her awesome photos with Henry at The Durrell Challenge, and the funny story behind them. The money she donated went a long way in helping Durrell get closer to their fundraising target for the event. Here is the link where you can pitch in to help them and Henry accomplish that goal. Learn more on how your money supports Durrell's work around the world at durrell.org and cavillconservation.com.
Posted by Blog Administrator