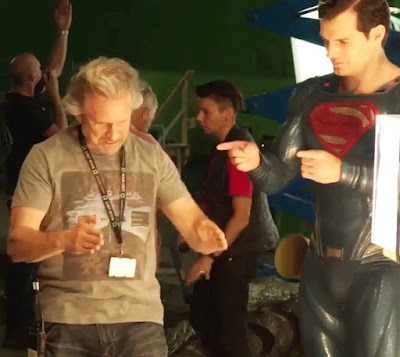 As we tried to keep up with Henry while he filmed Mission: Impossible 6 in Paris, somehow we missed this very important nugget of information involving Justice League. A few weeks ago Collider got a chance to interview Producer Charles Roven, and he mentioned Henry as he talked about the struggle to schedule the additional photography planned for this summer in England:

“We’re just in the post-production process. That’s where we are. We’re in the middle of it, and I think it’s pretty common knowledge that we’re going to be doing some additional photography. The complications of trying to, you know—Henry [Cavill]’s on Mission: Impossible, and our Aquaman is makingAquaman, Amy [Adams]’ doing Sharper Objects [sic]—so everybody’s busy, and it’s that crazy Rubix cube of trying to find a way of getting everybody in the place to do the work that we need to do. Which is not that vast, the amount of work that we have to do, but it’s still really complicated that everybody’s in different places around the world.”

You can watch the brief clip over at Collider, where Roven adds a few more post-production details.

Zack Snyder decided to shoot the additional scenes, after he screened a rough cut of Justice League for fellow filmmakers and friends. That's according to The Hollywood Reporter that broke the news of Zack leaving the film in the hands of Joss Whedon (who had been writing the new dialogue), to deal with a family tragedy.

There is no word yet on when the new Justice League scenes will be shot. But with Henry sporting a very different look for Mission: Impossible 6, we're guessing his scenes may have to wait until he's done filming that movie or you know.. fake moustache it is!

As always, we'll keep an eye out for the very latest and pass it on to you guys.
Posted by Blog Administrator