It's always great to hear how nice Henry is to his fans and those around him. An extra on the set of Man of Steel shared his story about working with Henry, and the conversation they had one day on set:

Henry is an amazing person. There is no other way to say it. This was my first big film, and he was the biggest actor that I had multiple interactions with. My wife had told me that Henry and I share the exact same birthday (05/05/1983). So during a scene where there were only two of us there with Henry, I noticed he had a heater and I was cold. I walked up to him and we talked like we were old friends. He talked about his family being in the military, and how he grew up in England. My father and step-mother also live in England (Tundbridge Wells) so we had a lot to talk about. We talked about his time on The Tudors, as he said he bought his first apartment there! I found it hard to believe he was actually from England because he spoke such fantastic English, so I asked him to change his accent. He could go back and forth with no problems! 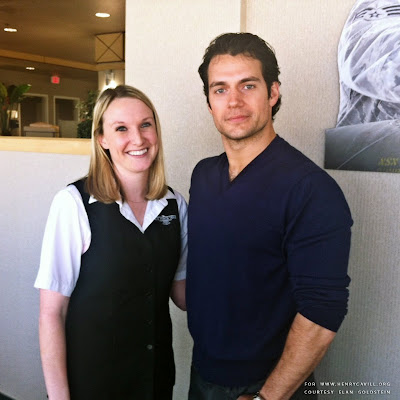 Read the rest from Elan Goldstein, including how his wife ended up meeting Henry. So proud to be Henry's fans.

Email ThisBlogThis!Share to TwitterShare to FacebookShare to Pinterest
Labels: Henry Is Such A Sweetheart, Man of Steel, On Set