The Buzz On The New 'Man of Steel' TV Spot: What People Are Saying 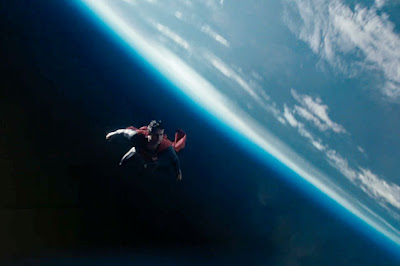 Hollywood.com grabbed these caps to highlight Superman's powers in the new Man of Steel TV spot, and we couldn't resist posting a couple (courtesy of Warner Bros.)

Holy cow, this movie is going to be AMAZING. But of course, knowing we're a little biased, we went in search of some feedback from the web. And we found plenty! 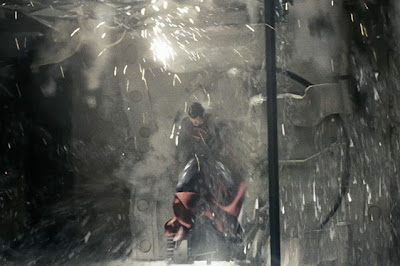 Drew McWeeny over at Hit Fix focused his write-up on why the spot didn't really need to have any action, and instead highlighted Superman's struggle to accept who he is:

By centering the campaign on an idea instead of a villain, it makes this feel different than most superhero films already. And by emphasizing character over action (and word is there is plenty of action, some of it truly epic), it makes this feel like a real film and not just another empty CGI spectacle.

Read the rest (Drew really does offer some great insight).

I am Rogue pretty much agrees with Hit Fix:

So the studio can put Snyder and Christopher Nolan's names on a commercial, implicitly assuring audiences that, unlike Superman Returns, this new adventure will have the Man of Tomorrow punching stuff, and, like Batman Begins, will have a compelling take on its hero's psychology. With that, there's not much need to drop heaps of action, reveal any spoilers, or appear anything less than entirely confident in this new take on the Big Blue Boy Scout.

The writer also seems pretty confident that Henry can deliver a hit (you can read the rest here):

The new TV spot is certainly a showcase for Henry Cavill, on whose beefy shoulders this reboot largely rests. There are also a few familiar shots of Amy Adams as Lois Lane. Adams has been nominated for no fewer than four times, and while Cavill isn't suffering from a shortage of vocal fans, he's also never carried a movie of this size before. It's exciting that though he's been on The Tudors and starred in Immortals, Cavill's an actor who can simply be Superman for most of the folks in the audience.

First Showing was pretty happy with the ad and its placement during the NCAA game:

It is good to see them pushing this to the mainstream public in the fully epic way. Plus, I love the shots they did use in this anyway, and the line "that the world wasn't ready... what do you think?" Oh this will definitely build some buzz.

The folks over at Empire, just seem relieved the spot didn't give too much away:

If we’re honest, we’re glad not to be seeing every single beat from the film before it even has a chance to unspool in our cinemas.

Overall people seem pretty happy with the latest promo spot. The rumor is the new trailer will be released at the Warner Brothers Cinemacon presentation in Vegas on April 16th. So much to look forward to!