Henry Holds No Grudges Againts Bullies, Hopes To Prove He Is Superman Worthy 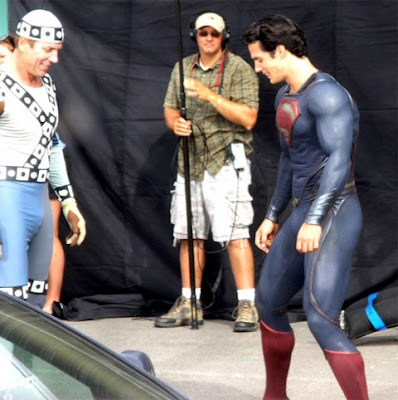 We're just now getting a first look at Henry's interview with OK magazine. In it he talks about preparing to become Superman, but also shares some childhood memories, his outlook on life, and we even get a bit of his flirty side:

What do you wear underneath it (costume)?

"[Laughs] I'll leave that to your imagination"

NAUGHTYYYY Henry!!, we can just see the smile that probably went with that answer ;)

Click on the links to read 1/2. We'll add the scans when/if we get them.


UPDATE: Partial transcript is in via:

In the interview for OK! magazine fit Brit Henry Cavill talks about playing out his fantasies as the new Man Of Steel...

They’re difficult tights to fill, but British actor Henry Cavill isn’t worried about taking on the iconic role of Superman in new movie Man Of Steel. "I focus on success because failure will take care of itself," he says. In Los Angeles to promote the movie the Jersey boy is dressed conservatively in a pair of navy trousers and a dark grey shirt which brings out his blue eyes. Softly spoken, he measures his words carefully and seems a little out of his comfort zone doing interviews, although he’s friendly and charming. It’s that charm which has no doubt led to Henry, 29, being linked to a string of beautiful women, most recently American actress Gina Carano.

Here, handsome Henry reveals all about his grueling preparations for the hotly anticipated movie, what he wears underneath his superhero costume and why he isn’t worried about the curse of Superman...

Do you feel super?

[Laughs] Very funny, I haven’t heard that one before.


How badly did you want the role? Did you fight to get it?

I wanted it really badly. You fight for every job you audition for. Normally you don’t knew the fight’s happening. You’ll go in, audition, do your screen test and then people will be fighting on your behalf — who want either you or someone else in the role. I just did my best to try and get the role and something right happened.

How did you prepare for it?

My goodness, a lot of preparation went into this role! I chose which material I wanted to draw from and that was basically the source material, the comic books. I didn’t want to draw from previous TV shows or movies because those are other filmmaker’s interpretations of this character. There’s an honesty to Superman and the want and will do the right thing — that’s all I tried to portray in my performance. I didn’t try to do anything too clever, I just thought — go to the source material, read some stuff in time for the screen test and provide an honest, straightforward, humble character.

Physically a lot of hard work went into it. There was two months of pre-training — just getting to me used to that kind of work. And then the hard work would start when I’d work with my trainer in a gym. The first two months were very, very difficult. He really put me through the ringer. Then we went into the bulking-up phase. It was about two hours a day of really crushing yourself, pushing way beyond limits which I certainly never perceived I had. It took a long time and a lot of dedication.

What about the diet?

There was a special meal plan set up. At one stage I was on 5,000 calories a day, which people say is a lot, but actually is really fantastic and pretty damn easy! [Laughs] I mean, it’s not junk food, but I loved it. I loved the eating side of it.

How did you feel in the costume?

After everything that went into it, I loved wearing it every day. You put it on and, sure, there were sometimes where it got tricky or uncomfortable, but I loved it. I mean, I got to be Superman every day! A really cool, modern version of Superman.

What do you wear underneath it?

[Laughs] I'll leave that to your imagination!

How much pressure did you feel?

There’s obviously the opportunity to feel a lot of pressure, but I try and avoid that because the one lesson I’ve learned is that I've done all the work now. There’s no need to do anything but just work hard and strive towards victory. If I let pressure play a factor, it would be a detriment to my work and my personality.

What did you do when you found out you got the part?

It’s surreal when you get a part like that, you don’t really believe it. The scope of what it is to get a role of this magnitude, with such a great team attached and the opportunity to tell such a wonderful story, is difficult to realise. Not to say I didn’t get very excited. I ran up and down the stairs of my house shouting for a good 15 minutes while I was trying to call my family — no one was picking up their phone!

You're following other British actors Andrew Garfield and Christian Bale playing American superheroes — did that worry you seeing as they were criticised for it?

Do I follow it? I mean, sure, every now and then I read stuff and see what people are saying, but I don’t think it matters. It’s an example I’ve used a lot but it still rings true — Superman is an invulnerable alien from Krypton, he’s not American. But the point is we’re all actors and we’re playing characters. I completely understand the feeling behind people saying an American should play this American icon, but hopefully we’ll put all fears to rest when people see he movie.

Kids love to imagine they’re Superman — who did you like to pretend to be?

I’m sure as a kid I had fantasies, but my parents raised my brothers and I to be very proud of who we are — not to the point of arrogance, but to the point of pride and confidence. Even when I had a tricky time in school, you know, because kids are mean and that’s just the way it is, I never wished I was anyone but me. I just thought, well this is pretty tough for the time being and let's get through this.

Have any of those kids tried to get in contact with you now to apologise?

Oh there’s no need to apologise. You weren’t friends after school so why would they be in touch with me now? These people, they’re adults now, and they’re different people from who they were. There’s no finger pointing. I have no hard feelings towards anyone. If I bumped into them in the street, I’d go for a pint for sure.


The rest when we get it! - Thanks to LoveHenryCavill for sharing!

Email ThisBlogThis!Share to TwitterShare to FacebookShare to Pinterest
Labels: Henry Is Such A Sweetheart, Magazines, Man of Steel, Promo