What A Way To Attract Superfans: Henry's Comic Inspirations On Display

UPDATE 4/21: We've added more of Henry's comments to EW about the comics he read, to prepare for Man of Steel.

“I read as much as I could, purely because I wanted to get a great reservoir of knowledge from the source material,” Cavill tells EW. “There are so many different representations of the character that it was easy to draw a baseline and pick and choose some flavors. They’re all facets and aspects of the same character, so you’ve just got to combine them and can play around with them and apply it to the script.” Read his comic by comic breakdown.

One of our favorite sections of the Man of Steel article in EW, was Henry talking about which comics he read to prepare for the role (click to read below). Henry Cavill News reader Stephanie works at a library, and shared her display of Superman comics along with Henry's Read poster. What a great way to inspire superfans! 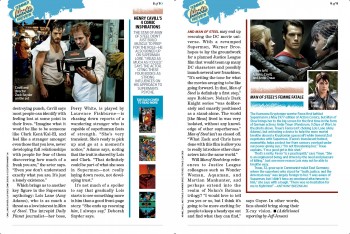