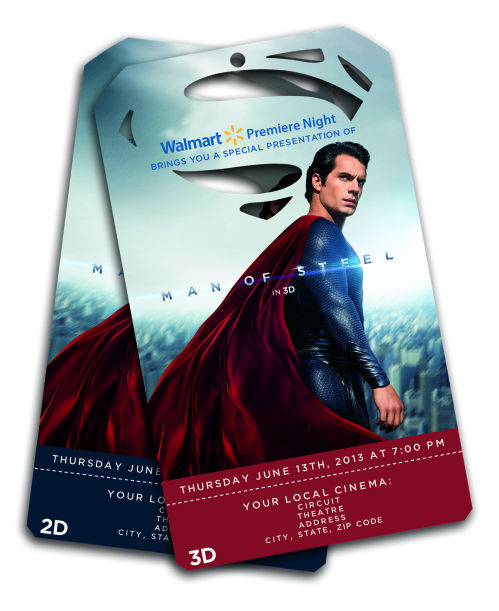 Walmart has officially revealed how fans can catch an early screening of Man of Steel the day before it opens in theaters. They also released a look at the tickets, details on an app that will unlock exclusive content, and a date for its merchandise release.  Read all about it at The Hollywood Reporter.

Variety talks about why the deal is key to giving Man of Steel the exposure it's looking for. Great read.

BENTONVILLE, AR, and BURBANK, CA – April 24, 2013 – Walmart announced today that it has partnered with Warner Bros. to give its customers exclusive access to see Warner Bros. Pictures and Legendary Pictures’ “Man of Steel” in theaters nationwide before the film’s official release.This program marks the first time in entertainment history that a studio has partnered with a retailer to provide such an opportunity for fans. Tickets for the exclusive screening of “Man of Steel,” will go on sale in more than 3,700 Walmart stores starting at 8 a.m. on May 18. Customers will be able to purchase up to four tickets per visit, and have the option to choose between 2D or 3D showings, where applicable. The advance screening will take place in selected local theaters nationwide at 7 p.m. on June 13. In addition to being the first among their friends to see “Man of Steel,” Walmart customers can also take advantage of the following offers:
• Priority Purchase of Blu-ray Combo Pack or HD Digital Download: Each ticket bought at Walmart will feature a code on the back that allows customers to pre-order their own Blu-ray Combo Pack or HD Digital Download of “Man of Steel,” which will contain exclusive film content.
• Official “Man of Steel Experience” Mobile App: Fans can bring Superman to life with the official “Man of Steel Experience” augmented reality app. The app allows customers to take photos with the superhero, as well as unlock special photo frames by pointing their phone at “Man of Steel” signage in their local Walmart. To download the app please visit: Apple App Store or Google Play.
• Exclusive Original Digital Comic Book: Customers will receive a free original Digital Comic Book written by “Man of Steel” screenwriter David Goyer with every ticket.
• “Man of Steel” Merchandise: Beginning April 28, a variety of “Man of Steel” merchandise such as t-shirts, electronics, posters and more from top brands will be available at Walmart stores and at Walmart.com.
Posted by Blog Administrator