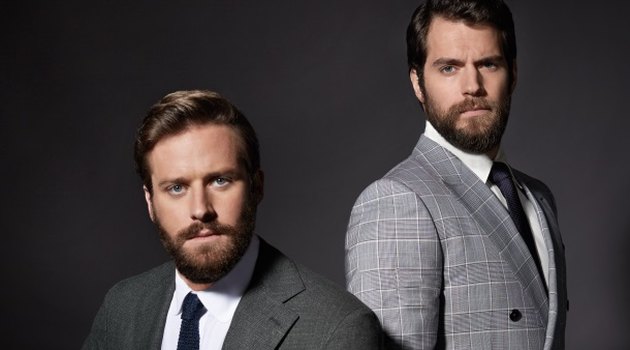 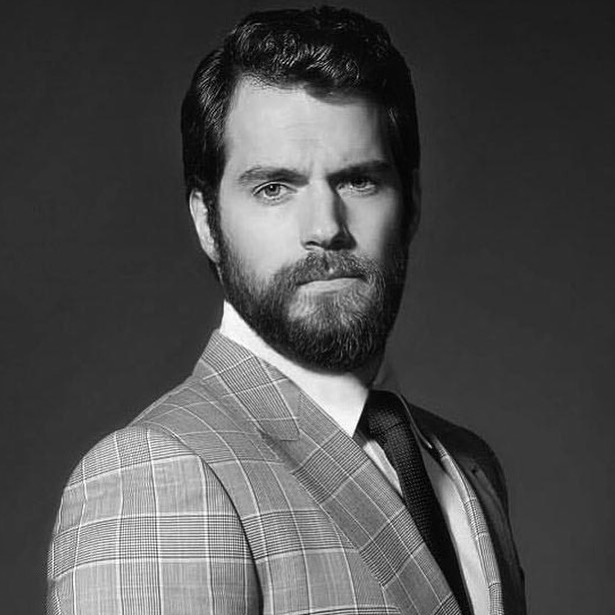 We had seen this gorgeous shot by photographer Lorenzo Agius in Cosmopolitan Russia (August, 2015), now we're about to get more details on the shoot/via. UPDATE (10/2): Read the interview with Agius. 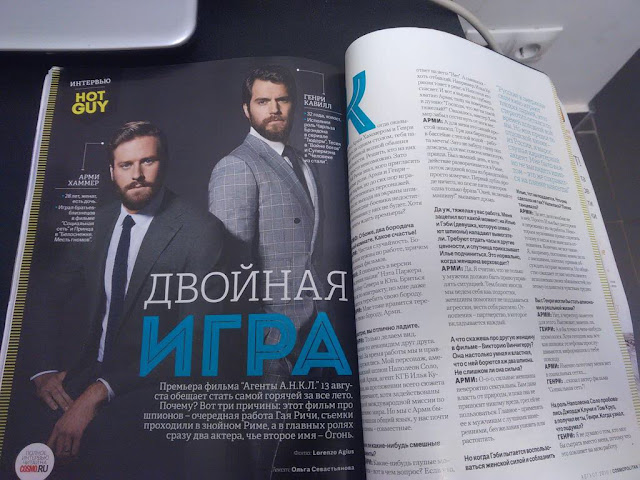 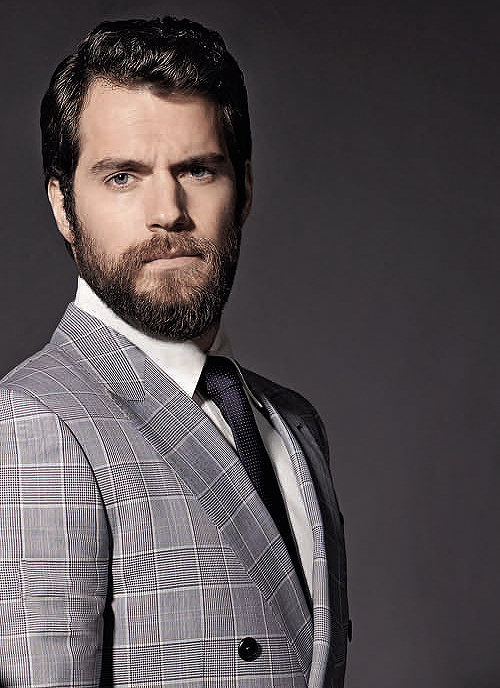 
Agius recently released some beautiful outtakes from his work with Henry in Ireland for Men's Health magazine back in 2008.

UPDATE (9/29): Thanks to the lovely Rebecca, we have the translated version of the interview with the magazine.

Bearded Armie Hammer and Henry Cavill of the movie “The Man from U.N.C.L.E.”

When you find yourself with Armie Hammer and Henry Cavill at the table, you're covered with a powerful wave of charm and sexuality. To decide which of them is cooler, it’s simply impossible. But it is clear: Guy Ritchie knew whom to cast in the spy comedy - thriller "The Man from U. N.C.L.E." Armie and Henry - famous guys, and after the premiere on August 13 they will not lack in attention. Why wait for the premiere?

My God, two bearded men in one room. What happiness!

Henry: Pure coincidence. The beards are necessary for our work on different films.

Armie: I’m doing a version "Birth of a nation" (directed by) Nate Parker, about the war between the North and the South. I cannot shave under contract, but I like to stroke the beard.

Henry: I too like to stroke your beard, Аrmie.

I can see you're getting along great.

Henry: We only pretend. In life we hate each other. I joke! In truth, while working together we have become friends. My character, the American spy Napoleon Solo and Armie’s, KGB agent Illya Kuryakin throughout the story fight, though they’re involved in an international mission to save the world. But we quickly found a common language, we have almost all the scenes together.

Were there any funny moments?

Henry: What is a funny moment - that is the question? If anything, the answer is "No". Something funny - more than expected. For example, Illya Kuryakin is drowning in the river, and Napoleon saves him. And I dive to a depth, grab Armie, drag him the surface and think, "God, why are you so heavy?" It turned out, Mr. Hammer forgot to detach the leg weight.

Armie: And for me it was the easiest scene. Three days to wallow in a pool of warm water - a dream job! But do not forget the scene in the rain, for us, very gloomy. It was a winter’s day, and although the action takes place in Rome, the flow of ice water from a hose was torture. First cut wasn’t anything, but after five takes, just one phrase, "Okay, start the machine!" caused a shiver.

Yeah, you work hard. There’s a moment: Illya and Gaby (the girl who is being looked after by the agents) are attacked by thieves. They demand that you give over watches and other valuables, and Illya is told to obey the order. It's okay when the women is the boss?

Armie: Yes. I believe that not only men should have the right to manage the situation. Moreover, sometimes we behave like teenagers, women help to resist the aggression, to behave reasonably. A relationship is a partnership in which each is involved.

And in general, would you act so in real life? Would give all without a fight?

Armie: "Give everything" - including life? If so, then I would try to stay alive, no matter what it takes. But if it is just a purse, I would not fight. I have a child at home.

Yes, you do, you became a father a year ago. How does it feel?

Armie: Absolutely incredible. All I did before in my life, can not be compared. Everyday, my daughter learns something new and it’s a surprise, for example, "Oh, this is a soft," "but it's warm," "look around so cool" - To see the world through the eyes of a child - is a gift.

And now how do you see the world?

Armie: fresh. And not so hostile as I thought about it before. I will do everything so that Harper does not see the evil that it is happening.

Speaking of evil. The film is a villain, Victoria Vinciguerra. She is so clever and powerful that is already fighting two spies (..)


Armie: Oh, strong women are incredibly sexy. You are given the power of nature, and as long as it does not bring any harm, it is not a sin to use. The main thing - to apply it to men with the best of intentions, without the desire to humiliate or crush.

But when Gaby tries to take advantage of her womanly power to seduce Illya, he does not give in. What did she do wrong? Drunk? Poor dancing?

Armie: No, it's not at all that. Just Illya was upset and worried because of the work. Stuck in a foreign country and has to deal with "stupid Americans", then there's some girl who just wants to have a drink and have fun. And he has a difficult day tomorrow, he was entrusted with a very important mission. Women are emotional and for men is much easier to do what must be done, without getting involved in a relationship. Of course, not all of us. For example, I constantly have to deal with emotions, so I’m accustomed to discussing hard topics. But society expects him to be silent in the performance of his duties, therefore, displaying feelings is difficult.

Could you and Henry could be spies in real life?

Armie: No, I am too conspicuous for it. Too tall, you know.

Henry: I would give anything a stab. Although today we are all as spies, tapped phones, information about you everywhere.

Armie: This is why I do not have social networks ...

Henry ... says the actor from the film " The Social Network!"

George Clooney and Tom Cruise auditioned for the role of Napoleon Solo, and you got it, Henry. Are you proud of that?

Henry: I do not think about who could play it instead of me, because it will affect my work. While preparing for the role, I focused only on what Guy Ritchie said, I did not even watch movies about spies. If you're going to compare yourself with others, you will never be who you are.

Armie, what about you captivated Guy? Ilya Kuryakina could have been Christian Bale or Joseph Gordon-Levitt.

Armie: Really? Wow, I did not know that!

Henry: Oh, it was necessary to get Bale.

Armie: I just happened to be in the right place at the right time.

Henry: No, you were the best candidate for this role, but you can not say it.

Armie: Precisely. Thank you friend! Guy's got great taste, and he knows how to influence the perception of the actor in the film. Each of us fit into the overall mood and nobody over tightens the blanket over himself.

Armie: Oh, yes, one of the funniest people on the planet. You never know what he will say next. You think that would read his cue like this, and he takes and makes it a completely different way, in a way you would not think of. It was great.

Henry: Actually Guy knows how to create a party atmosphere, even at work. Therefore, "The Man from U.N.C.L.E." turned out so fun, witty and stylish.

Speaking of style: you have beautiful costumes. Henry's jackets are even more than tailored than in “the Tudors.”

Henry: It was not easy (..) Everything was sewn in one or two months or had been found as vintage and it's hard for me to pick something - my frame is not friends with fashion.

Imagine that you live in the early 60s. What are you doing?

Henry: I would say, but you could not print it.

Armie: It would be cool to be twenty years old and live in America.

What about "living in Russia?”

Henry: Oh, thanks! Armie, your character is Russian so you should answer.

Armie: This situation would be difficult, not to stick out.

You, by the way, have perfectly represented our accent. Americans rarely succeed.

Armie: I do not like how Russians are portrayed in the movies, and I tried not to look like an idiot because it will remain forever. And Dad was thrilled when he learned about this project. My paternal ancestors are from Russia, since my childhood I have heard the “proper” accent, although I do not speak Russian.

Have you visited Russia?

Armie: I’ve been to Moscow a couple of times. I really liked how the present is intertwined with history: it seeps out of the walls of literally every building. And, of course, do not forget the delicious vodka, which I drank a little too much of. Bearded Armie Hammer and Henry Cavill of the movie “The Man from U.N.C.L.E.”

Contributor: @locarranza (thanks for the link!).
Posted by Blog Administrator