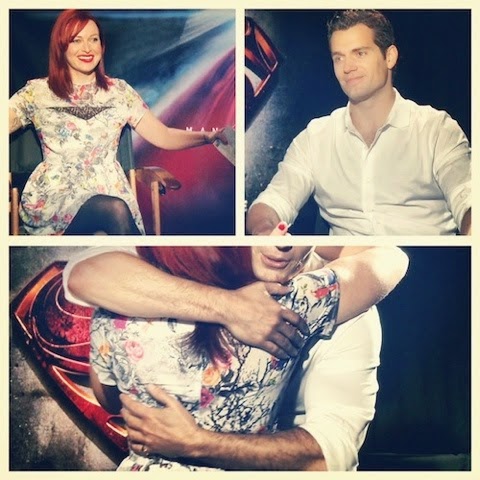 You remember this hug. Alicia Malone made us all jealous during the Man of Steel promo, when at the end of her interview (at about :54) she asked and got a BIG.. WARM.. TIGHT.. hug from Superman.

Well guess what? it happened again in Rome! - Alicia was there to cover The Man from U.N.C.L.E. junket a few weeks ago, when she first mentioned that Henry had complemented her on her dress during their interview there (at about 4:30).

Fast forward to tonight's episode of Schmoes Know, and she added some very cute details from the cocktail party that followed. You're gonna really love Henry (who was looking oh, so hot that night).. and be SUPER jealous (again) of Alicia.

Take a listen at about 1:11. Some girls have ALL the luck.

#HenryCavill told the interviewer Alicia Malone to believe in herself... I guess that's a message we can all be inspired by. Amazing!
— ʜᴇɴʀʏ ᴄᴀᴠɪʟʟ ᴄᴀʀᴛᴏᴏɴ (@HenryCavillToon) May 22, 2015

@aliciamalone love love, love your Henry Cavill story. I knew there was reason why Superman is my favourite Superhero.
— Seb Lacey (@Sebbman80) May 22, 2015