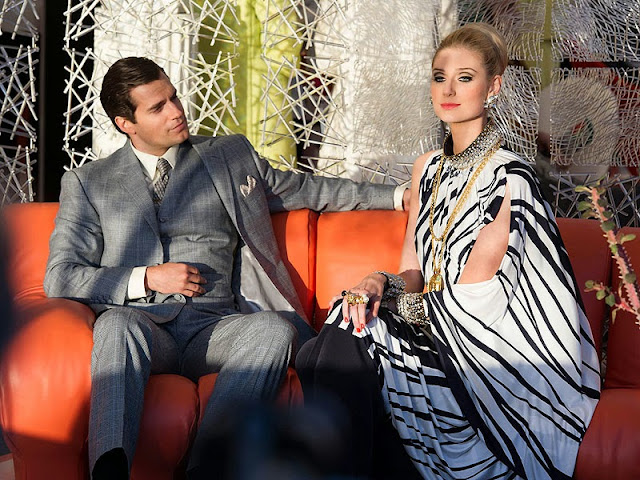 Of all the summer movies, I'm excited about #ManfromUNCLE Guy Ritchie doing stripped down spy stuff set in the 60's, sold!
— benny Sperling (@benny275) May 13, 2015


Solo we hope you're ready, because people can't wait to see you on the big screen!


@SomersetHouse #Film4SummerScreen I can't get tickets! Looks like Man from UNCLE sold out in under a min or is there an issue with the site?
— Christine (@yee218) May 13, 2015

Awesome @Film4 the presale for Man from UNCLE was done and dusted before I could click a mouse. Feels like #BTTF from @secretcinema all over
— Bad Timing (@badlytimedtweet) May 13, 2015


That's right! - Stephanie at Somerset House tells us that tickets for the People's Premiere of The Man from U.N.C.L.E. on August 7th, went pretty fast in the pre-sale today!

She also clarified for us that the special screening is not the world premiere of the film and there will be no red carpet, but it is the first time people in the UK get a chance to see Henry in action as the suave spy (and trust us, you'll want to see that as soon as you can). She also added that as of right now the stars are not confirmed to attend the screening, but of course that could change. If you live in London and missed your chance to get tickets today, you'll get another opportunity Friday starting at 10 am. So be ready to snatch those up, because The Man from U.N.C.L.E. is a fun action film you don't want to miss. In fact according to the Huffington Post, it's one of "5 Movies Every Grownup Moviegoer Should See This Summer:"

If you were a fan of the 1960s spy classic, you'll enjoy this film, which is directed by Guy Ritchie. Set against the backdrop of the early 1960s at the height of the Cold War, the movie stars Henry Cavill, who hasn't been seen on screen since "Man of Steel." Cavill plays a CIA agent who teams up with the KGB in order to stop a mysterious international criminal organization bent on worldwide destruction. See the official trailer here.

Here is a look at the official release dates around the world, as the love for Solo keeps growing! Daniella caught up with him at a theater in Mexico ;)

Don't miss everything from Rome, where Henry just promoted The Man from U.N.C.L.E. - And keep up with director Guy Ritchie, who has been sharing awesome behind the scenes pics from the film..


That’s what a director does, he talks about the size of the fish he caught. #ManFromUNCLE pic.twitter.com/dzqou7T7mN
— Guy Ritchie (@realguyritchie) May 4, 2015

We are now just THREE MONTHS AWAY from the release of The Man from U.N.C.L.E. in the U.S. and the UK, and all we have to say is..