UPDATE: We knew we'd be hearing more from director Zack Snyder and boy did he deliver! -- while talking to The LA Times, Snyder confirmed filming is just weeks away & gave a pre-production update:

We’re getting ready to start shooting in a month or so. It’s going great. I’m very excited. It’s very fun to get into this world with different heroes coexisting in the same universe, but a lot of balls in the air as they say. As a fan, it’s an amazing opportunity. You know, Superman and Batman in the movies have never existed in the same frame together. So it’s an interesting historical thing. We were just testing the suits, right? The new Batsuit and the Superman suit. It wasn’t even with the actors, right? It was just to see ‘em. I was standing there, they were standing next to each other. And I was like, “Guys, someone take a picture! This has never happened before.” We slightly dork out. Like, “Are you kidding me?!”

The Batman vs. Superman director also mentioned casting choices and the fan reaction. Check out the entire interview at The LA Times.

The Huffington Post chatted with Man of Steel 2 director Zack Snyder, ahead of the release of 300: Rise of an Empire which he produced. When the conversation shifted into Man of Steel territory, Snyder addressed the critics who had a problem with the end of the film:

From the beginning, I had a philosophical approach to what I would do with Superman. And I always sum it up by saying that the most realistic movie I've made is a movie about Superman --because that's what I felt like the movie needed.

Did you ever consider making it with a different visual style?

No. I mean, I had a knee-jerk reaction to that script that was "this movie needs to feel like it's stone-cold real." And that was, to me, ironic and I'm always looking for some ironic element within the storytelling -- like some bit of meta. For me to get excited about it, it needs to infiltrate the movie. And for me, that was that a Superman movie would be real. 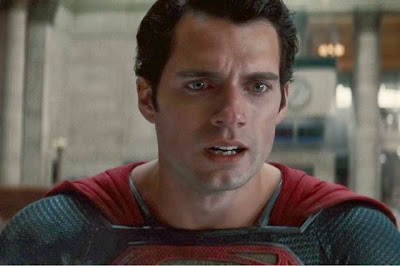 Snyder and his wife Deborah also talked about the Batman vs. Superman leaks, and how they now have to look at them as part of the process:

The leak becomes the audience involvement. They are now part of it, the process. Do you know what I mean? And you have to take that as the world we live in, as opposed to "Oh, that's too bad."

The Hollywood power couple went on to mention the surprise casting announcements for the Man of Steel sequel and more. Read the rest at The Huffington Post. We've put everything we know about the sequel in this handy bundle. Catch up now!
Posted by Blog Administrator

Email ThisBlogThis!Share to TwitterShare to FacebookShare to Pinterest
Labels: Batman vs. Superman, Man of Steel, News