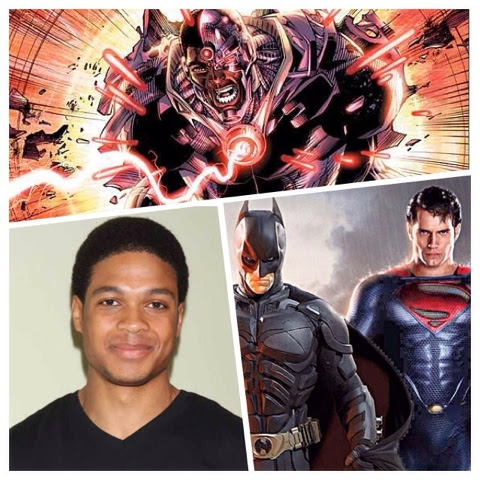 Variety is confirming the latest cast member set to join Henry in Man of Steel 2. Ray Fisher has reportedly been tapped to play Cyborg:

Cyborg, while not a major part in the Batman-Superman feature, is a member of the Justice League and will become a much more significant role as Warner and D.C. develop more films related to the Justice League universe, sources confirm.

The Hollywood Reporter has more about Ray's role:

Stone/Cyborg was for decades a member of the Teen Titans, a group of heroes that included the sidekicks of adult heroes such as Robin, Wonder Girl and Kid Flash. The character became retrofitted to be a member of the Justice League in 2011, when DC Entertainment relaunched its comic book line as the New 52.

Warners quietly added the character to its casting call several months ago, when it began looking for a physically fit black actor. The part at the time called for only one scene but promised more in terms of future movies.

The casting news really doesn't come as a surprise, since a few months ago Latino Review revealed that Warner Bros. was looking for someone like Ray, and they even guessed it was for the role of Cyborg. And as a fan pointed out...

Wow so Cyborg tooooo :) Remember when Henry Cavill told us about that Easter Egg way back when? #illuminati
— Ivan Lee (@Ivan0oze) April 24, 2014

That's right! - Man of Steel knows everything.. watch him talk about Cyborg at about :40. Henry was promoting the Man of Steel Blu-ray release and was excited about the prospect.

So far your reaction to Cyborg's addition to Batman vs. Superman has been pretty funny. You guys, trust the powers that be.

Henry Cavill is calling his agent right now "I'm still the main focus, right? How many more of these cameo/Easter eggs we gonna have?!"
— Cody Ferrell (@TheThorverine) April 24, 2014

At some point Henry Cavill has got to wonder if he even needs to show up for filming for his own sequel.
— Brian Collins (@BrianWCollins) April 24, 2014

The latest casting does narrow down the field of possible roles The Rock could be playing, as Mark Hughes over at Forbes points out - READ MORE. And we tend to agree with this prediction from Latino Review.


I wonder who is going to play the other "small part" in Batman vs Superman. *cough* Nightwing/Dick Greyson *cough*
— elmayimbe (@elmayimbe) April 24, 2014


So what do you think? sound off in the comments section. Batman vs. Superman production updates as we get them, extras casting call THIS SUNDAY.
Posted by Blog Administrator