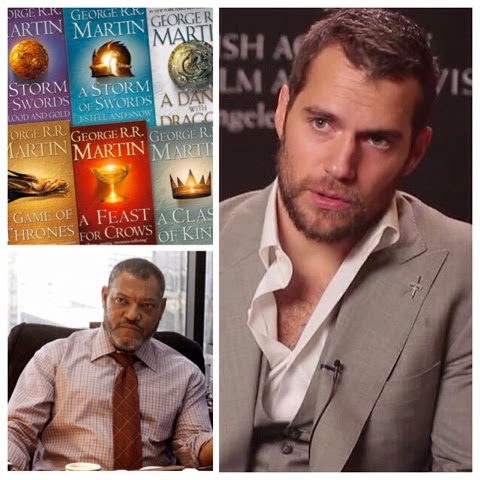 Fact: Henry Cavill is a huge Game of Thrones fan. If there was any question, Conleth Hill (who plays Varys in the TV adaptation of the books) put that to rest in his new interview with New York magazine. And it all came about when he mentioned Henry's Man of Steel and Batman v Superman costar, Laurence Fishburne:

So one of your hardcore fans is Laurence Fishburne?


Yes! I've met him since, and I'm a bigger fan of his, but I worked with his beautiful wife Gina [Torres] on Suits, and she and I became friends. And on my first day there, she told me that he was a big fan. Apparently he was about to watch the show, and Henry Cavill was the one who told him, "No, no, no, read the books first," so he became a fan of A Song of Ice and Fire, all the Game of Thrones books. He's read them all. And then, she showed me a text from Laurence that said, "Welcome, master of whisperers and your little birds, too," or something like that, which was very sweet of both of them. It made me feel at home. But you know, I didn't read the books...

Why do we see Henry giving him the side-eye right about now.. (not really!) -- Hill goes on to explain why he didn't read the books, and if you're a Game of Thrones fan (yes, we're talking to you Henry) you'll want to check out the rest of the interview.

Here's a handy link to the books, and George R.R. Martin's extensive site.