We have a lot happening this week, and can hardly contain our excitement as we wait for The Man from U.N.C.L.E. trailer to hit... 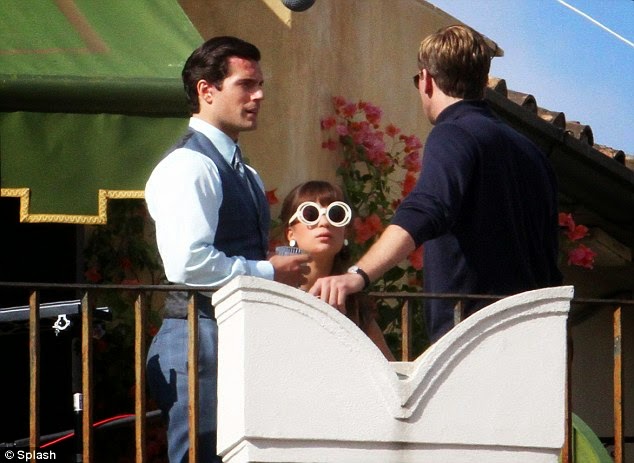 But first things first, this bromance is over...

It was lovely while it lasted, but then Sony announced it's joining forces with Marvel so Spidey can hang out with Captain America and friends...

As part of the revamp, the new Spider-Man will first appear in a Marvel film. The companies are not revealing details but that movie is likely to be Captain America: Civil War; the character was a major player in the comics storyline (..) There is also talk of looking for ways to integrate characters from the Marvel Cinematic Universe, as the Marvel movies are known, into future Spider-Man films.

Uh huh.. yeah Chris, we're not having that. Enjoy your new buddy Spiderman, we've already found a new wingman for Henry. Grant Gustin who plays The Flash on TV, says he would love to work with Superman.


Who's the funniest person on set? How is working with @RobbieAmell? @grantgust answers YOUR #TheFlash questions! https://t.co/Xu4MHja8hK
— The Flash (@CW_TheFlash) February 9, 2015


And if that's not enough, Man of Steel's #1 fangirl is coming back!


Christina Wren just confirmed to Pittsburgh magazine that she's making an appearance in Batman v Superman. And while she couldn't share much, what she said made us all giddy!

I can tell you that I think it’s going to be badass! They’re just such an awesome team. The bits that I was on set for look fantastic; everyone in it is fantastic. It’s exciting; it’s high-energy; it’s high-action. They are addressing all of the things that they set up in “Man of Steel.”

While we wait for Batman v Superman promo to begin, Henry is expected to be busy filming Stratton in the spring. His company, Promethean Productions, is co-producing the film. This week his partner Rex Glensy is at the Berlin Film Festival, and he's been sharing updates.


Last we heard the search for a director was still on. We can't wait for filming to begin!

Back to The Man from U.N.C.L.E., the much-awaited trailer is expected to be attached to Kingsman: The Secret Service when the film opens in the U.S. this Friday. But you know how it goes with new trailers.. can't wait to see you online, Solo!
Posted by Blog Administrator

Email ThisBlogThis!Share to TwitterShare to FacebookShare to Pinterest
Labels: All About Henry, Batman v Superman, Stratton, The Man from U.N.C.L.E