The Man From U.N.C.L.E. Reaction Post: Get Out And Watch It! 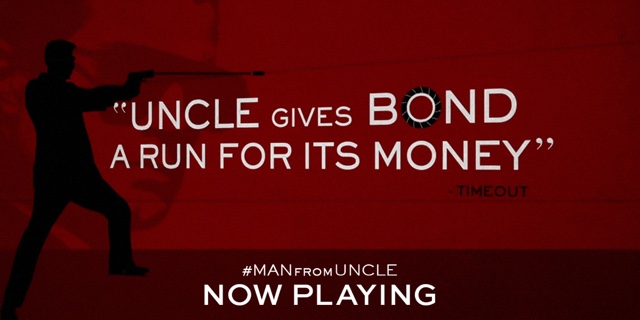 
THE DAY IS HERE.

Show your support for Henry and get out and watch The Man from U.N.C.L.E. this weekend, we promise you will LOVE the film and him as Napoleon Solo!

Today his Michigan friends highlighted why it's such a great watch, and believe us -- they are right!

Do yourself a favor this weekend and check out Guy Ritchie's (@guyritchie ) new film, The Man from U.N.C.L.E. (@themanfromuncle ) staring my friend Henry. Guy has a very engaging film style and highly developed characters. In a time when there are dozens of big budget films released monthly Guy has still managed to do things unique. How the camera sweeps, the sound cuts, strong personalities, edgy style, ect... The Man from U.N.C.L.E. Is another great film to join Guy's other classics like; Snatch, Rocknrolla, Sherlock Holmes, Lock Stock, ect... #guyritchie #henrycavill #themanfromuncle #classic
A photo posted by Bradley Berlin (@bradleyberlin) on Aug 14, 2015 at 9:27am PDT

@themanfromuncle opens today, it is the result of tireless work and Love of so many To the #team of beautiful artist and filmmakers my unwavering #Gratitude and to our Captain @guyritchie You are a prince and a class act thank you for two years of #Wonder and @lionelwigram I just F...ing Love You! @Mrsleshem @flowerobsessions @armiehammer #HenryCavill #AliciaVikander #ElizabethDebicki #lucacalvani @garymantoosh @vaneboz @lariggot
A photo posted by Luca Calvani (@lucalvani) on Aug 14, 2015 at 2:04pm PDT


Please share your reactions. Let's make this a winning weekend for Henry!

@ManFromUNCLE without a doubt my favorite movie of the year! everything from the casting to the story was fantastic! #AMustWatch
— D.C. (@DarrenConnolly_) August 15, 2015

@HenryCavillNews - refreshing to see Henry Cavill. A rising star the has talent, a class act and humanitarian. Hollywood needs more like him
— Ron Murzyn (@RMurzyn) August 15, 2015

@HenryCavillNews @ManFromUNCLE I loved it! It was fun and stylish. More believable than MI!
— Staci (@bohemianclassic) August 15, 2015

I can report that #ManFromUNCLE is a delightful film that was so much fun to watch, and I would highly recommend it.
— Dale Smith-Journo (@journo_dale) August 15, 2015

Saw @ManFromUNCLE it was amazing and hilarious!! Henry and Armie are amazing!!! Can't wait to get it on DVD 😂😂😍😍 @HenryCavillNews
— Aaliyah (@aaliyahrowell14) August 15, 2015

I just saw @ManFromUNCLE it's Hollywood's finest movie. Here's why it's the perfect movie - it's got action, comedy & a touch of romance!
— Nicole Cotterill (@NicoleCotterill) August 15, 2015

@ManFromUNCLE is the most enjoyable film I've seen all year. Hands down one of my top 3 in the past few years.
— Langley McArol (@langleymcarol) August 15, 2015


The film is outstanding, but it's facing some tough competition at the U.S. box office. However according to Deadline, U.N.C.L.E. is doing great business overseas.

Russia dominated the B.O. with 60% of the market share on 1,804 screens. In first place, the Guy Ritchie-directed film has accumulated twice that of No. 2, Mission: Impossible – Rogue Nation with a cume of $1.2M.

In the United Kingdom, U.N.C.L.E. is off to a decent start with $749K at 505 venues. Performance is strong in London, particularly the West End, and the South with those regions gaining higher than average market shares. The Vue Westfield was the pic’s highest grossing site, with Imax hubs overperforming. Friday’s figure is in the sphere of The Bourne Identity, Red and Get Smart. (..)

Many markets will continue to have holidays for another three to four weeks and Warner Bros. International plans to take advantage of the play period heading into September.

C'mon U.S., you still have time to do your part - represent!

Email ThisBlogThis!Share to TwitterShare to FacebookShare to Pinterest
Labels: All About Henry, Fan Support, Solo Time, The Man from U.N.C.L.E