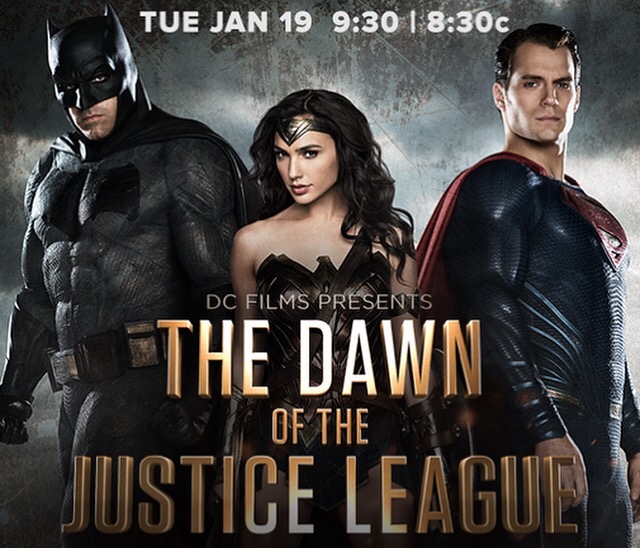 "The Dawn of the Justice League" sounds pretty amazing to us!

And Lex is turning out to be the least of our worries in Batman v Superman. (Jesse being all cuddly with Bats and Supes in New York Tuesday.)


Me and lil bro lol @cbass_yoo hanging with Jessie Eisenberg from #batmanvsuperman at work today #midtowncomics
A photo posted by Mistah j (@ohmistahj) on Jan 12, 2016 at 11:32am PST

The Daily Beast asked director Zack Snyder about his recent “Maybe there’s a bigger enemy to fight” quote. That only opened up a bigger can of.. villains:

“Well, you have Doomsday, right? He doesn’t just crawl out of the ground. He has his own mythology, right? So that has to be explored…”

The tight-lipped Snyder’s not giving up much more than that for now. But he does want audiences to begin thinking of DC’s superhero brand in macro terms. “To us it really made sense to give [Doomsday] to the audience now. I really wanted to make the audience a promise that… though I’m super excited and happy and fulfilled by the conflict of Batman and Superman, there’s also a bigger world to start to think about.”

Is Zack the BIGGEST tease or what?? - Read the rest on The Daily Beast.

With an April filming start date on Justice League getting closer, exciting updates are starting to come in.


Go Aquaman! -- and Costume designer Michael Wilkinson also just shared a bit of what he's working on ahead of the start of production.


In Madrid for the day gathering #costume pieces for my next project #batman #superman #wonderwoman #fashion #dccomics #cornejo
A photo posted by WilkinsonMartin (@wilkinsonmartin) on Jan 13, 2016 at 11:32am PST

So much going, and we'll continue to bring you the very latest!
Posted by Blog Administrator