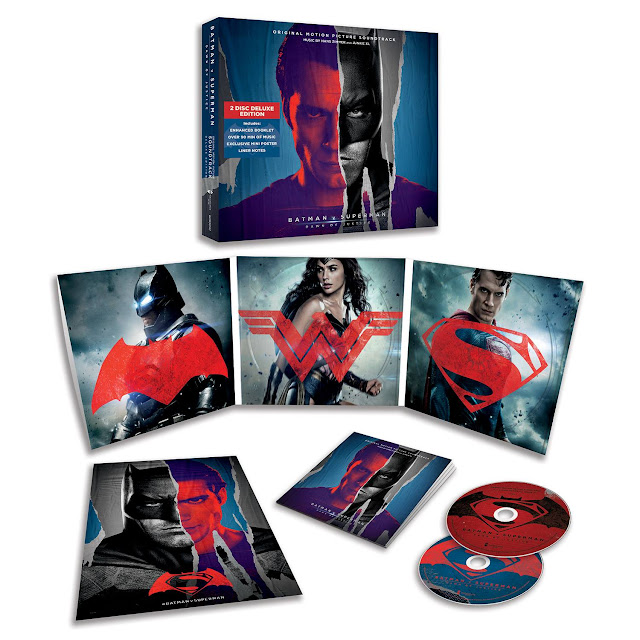 
What a way to kick off the weekend!

Composer Hans Zimmer just gave us a first listen of his Batman v Superman score, and you can SO hear the Man of Steel in there. He also gave us a first look at the cover art and everything else you need to know about the soundtrack that is now available for pre-order.


JANUARY 15, 2016 – Los Angeles, CA - WaterTower Music announced today the March 18 release of the soundtrack to the upcoming feature film “Batman v Superman: Dawn of Justice,” a collaborative effort by film composers Hans Zimmer and Junkie XL (aka Tom Holkenborg). Available digitally, on CD, 2-disc deluxe CD, and on Limited Edition 3-disc deluxe vinyl, the first public sample of the music has been made available HERE, and the album is now available for preorder. The 2-CD deluxe package, the digital deluxe version, and the 3-disc deluxe vinyl set feature over 90 minutes of music, five bonus tracks, an exclusive fold-out poster and liner notes from the composers. Additionally, the vinyl set features etched vinyl art and an album download card.

“Junkie XL is an incredibly insightful film composer. It was a perfect idea for us to work together on the ‘Batman v Superman’ score,” explained Academy-Award-winning composer Zimmer. Grammy nominee Junkie XL showed equal excitement at the pairing, saying, “Hans has an incredible legacy, and I was extremely thrilled when he approached me to work on ‘Batman v Superman’ with him.”

The composers discussed their close working relationship with director Zack Snyder. “Zack allows us to try things we haven’t tried before. He’s very supportive of the eccentricities that we bring to this,” says Zimmer. Junkie XL concurred. “He’s very open and accepting of our ideas, and infuses the creative process with an energy that inspires you.”

"Hans and Tom (Junkie XL) created an incredibly compelling and interesting new musical world for Batman, while continuing to expand on the amazing world and themes Hans had previously created for Superman,” noted director Zack Snyder. “By aligning their vision with my perspective and seeing the characters anew through the lens of the film they were able to support the visual aspects of movie in a way that elevates the film to another level. In so many ways, they become the final texture, the final note in the process of creating the world.”

“This electrifying collaboration brings us such brilliant new character themes,”
commented WaterTower Music head Jason Linn, “While we've been fortunate to work several times with both composers individually, this experience has been uniquely thrilling.”

Batman v Superman: Dawn of Justice – Original Motion Picture Soundtrack will be released March 18. It is now available for pre-order at iTunes. The Deluxe CD and Deluxe Vinyl versions will soon be available for preorder. The track list is as follows:

** On deluxe versions only

The film also stars Oscar nominees Amy Adams (“American Hustle”) as Lois Lane, Jesse Eisenberg (“The Social Network”) as Lex Luthor, Diane Lane (“Unfaithful”) as Martha Kent, and Laurence Fishburne (“What’s Love Got to Do with It”) as Perry White; Oscar winners Jeremy Irons (“Reversal of Fortune”) as Alfred, and Holly Hunter (“The Piano”) as Senator Finch; and Gal Gadot as Wonder Woman/Diana Prince. Snyder directed from a screenplay written by Chris Terrio and David S. Goyer, based on characters from DC Comics, including Batman, created by Bob Kane with Bill Finger, and Superman, created by Jerry Siegel and Joe Shuster. The film is produced by Charles Roven and Deborah Snyder, with Wesley Coller, Geoff Johns and David S. Goyer serving as executive producers.

Warner Bros. Pictures presents, an Atlas Entertainment/Cruel and Unusual production, a Zack Snyder film, “Batman v Superman: Dawn of Justice.” The film will be distributed worldwide by Warner Bros. Pictures, a Warner Bros. Entertainment Company. The film opens nationwide in RealD 3D, and in 2D, and in select IMAX 3D theaters on March 25, 2016. It has been rated PG-13 by the MPAA for intense sequences of violence and action throughout, and some sensuality.

Have a great weekend everyone.

You can also get the vinyl version that looks awesome.