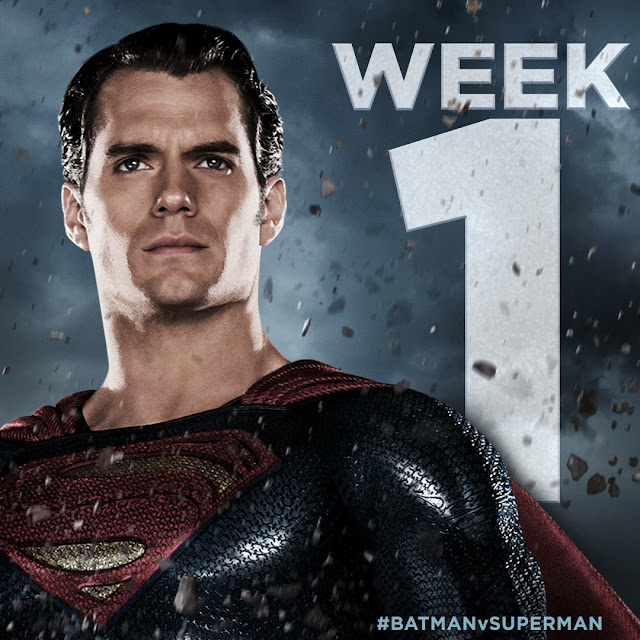 July is sure flying!

The Batman v Superman Ultimate Edition is set to be released next Tuesday, just a day before Comic-Con begins in San Diego. And if you're headed that way, there will be treats waiting for you.


Warner Bros. put out its schedule yesterday, and today DC Entertainment rolled out everything its bringing to the con. It includes specific information on autograph signings with the cast of Wonder Woman and Suicide Squad, details on Wonder Woman's invisible jet display, and much more. Read the official press release and look for full coverage from Comic-Con starting next Wednesday.

CELEBRATE WONDER WOMAN’S 75THANNIVERSARY, MEET THE CAST OF “SUICIDE SQUAD,” BE THE BATMAN AND MORE AT COMIC-CON INTERNATIONAL: SAN DIEGO 2016

DC Entertainment Takes Comic-Con by Storm with the Best Stars, Characters and Panels, along with the Hottest Comic Book Talent
and a Can’t-Miss lineup of Events

BURBANK, Calif. (July 12, 2016) – DC Entertainment is pulling out all the stops in 2016 to make Comic-Con International: San Diego an event to remember for the multitude of fans attending July 20-24. The greatest SuperHeroes and Super-Villains in comics and pop culture, the hottest artists and writers, exciting events and panels along with some of the most popular movie stars in Hollywoodwill all combine to make the DC booth (#1915) the place to be every day of the convention.

Comic-Con International: San Diego 2016 will be the launch pad for a yearlong celebration of DC’s famed Amazonian Super Hero. DC celebrates the 75th anniversary of Wonder Woman with a variety of activities commemorating her iconic evolution on and off the page. On Saturday, July 23 from 3:00 – 4:00pm in Room 6DE, fans will be treated to some of the creative talent at the heart of Wonder Woman’s past, present and future, along with a few surprise guests at the “Wonder Woman 75” panel.

Rare Wonder Woman costumes and props will be on display in the booth, including the original costume worn by Lynda Carter in the 1970s “Wonder Woman” television series as well as the costume donned by star Gal Gadot in the upcoming “Wonder Woman” 2017 feature film. Wonder Woman herself, Gal Gadot, will accompany her co-stars Chris Pine (Capt. Steve Trevor) and Connie Nielsen (Queen Hippolyta) to the DC booth for an autograph session, Saturday from 12:15 to 1:00pm. Wristbands for the Wonder Woman cast signing will be extremely limited and will be distributed beginning at 6am Saturday morning at the Sails Pavilion with the WB queue via lottery.

The excitement surrounding Wonder Woman’s 75th isn’t just limited to the show floor. Beginning Wednesday evening, fans will also have a one-of-a-kind opportunity to take a photo in the cockpit of Wonder Woman’s iconic invisible jet, located on the corner of Island and 6th, just outside the San Diego Convention Center in the Gaslamp district. Illuminating at night, this unique experience will also feature larger-than-life Wonder Woman art pieces being created live onsite, with art inspired by her history and upcoming film, by female artists throughout the weekend.

For fans that like to root for the bad guys, the “Worst Heroes Ever” will be in full effect at Comic-Con with a host of “Suicide Squad”-related activities. Throughout the weekend, the DC booth will feature costumes and props from the movie, in theaters August 5th. Comic fans will get a big dose of Suicide Squad, courtesy of the DC – Suicide Squad: Most Wanted panel on Friday from 11:15am-12:15pm in Room 6DE. The Harley Quinn team of Jimmy Palmiotti and Amanda Conner will be joined by artist Mauricet (HARLEY AND HER GANG OF HARLEYS), along with writer Rob Williams and legendary artist Jim Lee, the team bringing fans new adventures of these villains-turned-heroes in SUICIDE SQUAD: REBIRTH, on sale August 3rd.

On Saturday, fans will be lining up early to make sure they meet and get autographs from the cast of “Suicide Squad”when they make their appearance at the DC booth from 1:15 – 2:00pm. Cast members will include: Margot Robbie (Harley Quinn), Will Smith (Deadshot), Jared Leto (The Joker), Joel Kinnaman (Col. Rick Flag), Viola Davis (Amanda Waller), Jai Courtney (Captain Boomerang), Jay Hernandez (El Diablo), Adewale Akinnuoye-Agbaje (Killer Croc), Scott Eastwood (Lieutenant GQ Edwards), Cara Delvingne (Enchantress), Adam Beach (Slipknot) and Karen Fukuhara (Katana). As with the “Wonder Woman”cast signing, wristbands will be extremely limited; they will be distributed Saturday morning beginning at 6am at the Sails Pavilion with the WB queue via lottery system.

Scheduled nearly every hour of the Con, the DC booth will also host an array of appearances and autograph sessions for some of the best artists and writers in comics including, but not limited to, Scott Snyder (ALL STAR BATMAN, AMERICAN VAMPIRE), Tom King (BATMAN, SHERIFF OF BABYLON), Liam Sharp and Nicola Scott (WONDER WOMAN), Peter Tomasi and Pat Gleason (SUPERMAN), Hope Larson and Rafael Albuquerque (BATGIRL), Amanda Conner and Jimmy Palmiotti (HARLEY QUINN), Julie and Shawna Benson (BATGIRL AND THE BIRDS OF PREY) and Dan Jurgens (ACTION COMICS, BATMAN BEYOND).

Ever wanted to “Be The Batman?” Then come to the DC booth for a hands-on demo of “Batman: Arkham VR,” the first virtual reality experience that allows players to put on the cape and cowl of Gotham’s Dark Knight like never before. From Rocksteady Studios, “Batman: Arkham VR” immerses players into the gritty world of Gotham City through the eyes of the World’s Greatest Detective. And if that’s not enough Batman, the booth with also feature a life-sized LEGO Batman statue. Demos for Batman: Arkham VR will also require wristbands, available at the Sails Pavilion beginning Thursday at 6am.

Any self respecting fan knows that no comic book convention is complete without cosplay, and the DC booth is the go-to spot for some awesome cosplay get-togethers every single day:

All cosplayers who attend will be awarded a special custom DC Fans medal for participating (while supplies last).

The DC booth will also include a green screen where fans pose in backgrounds from their favorite DC comic characters, films and games, including the Suicide Squad movie, the Wonder Woman comic, DC REBIRTH, DC Super Hero Girls and the Injustice video game.

Fans will also be treated to a series of must-attend panels spotlighting DC’s iconic characters, and sneak peeks of yet-to-be released series. Highlights include:

• Fans jaws are still agape and minds blown from the biggest comics event of 2016: DC’s linewideREBIRTH relaunch! Join moderators Dan DiDio and Jim Lee along with some of the industry’s most creative talent to see what’s to come!(Saturday – 5:30, Room 6DE).

• Presented as “Comics for Dangerous Humans,” dive into the disruptive new pop-up imprint from My Chemical Romance front man and Eisner Award-winning writer Gerard Way, DC’s YOUNG ANIMAL. Joined by an experimental group of collaborators, Way will unleash a collection of bold new stories that will take the medium to places never before seen (Friday – 5:30, Room 5AB).

• After more than 75 years of stories, the Batman family of comics has never been hotter! Join the DC talent behind your favorite Dark Knight tales for an exclusive look at what’s next for the World’s Greatest Detective and his crime fighting colleagues! With Tom King (BATMAN), Scott Snyder (ALL STAR BATMAN), Julie and Shawna Benson (BATGIRL AND THE BIRDS OF PREY) and James Tynion IV (DETECTIVE COMICS) among others, this is the best time to explore the gritty streets of Gotham City! Room: 6DE

• Be there as top talent from the genre-defying Vertigo imprint such as SUICIDERS: KINGS OF HELL.A. writer/artist Lee Bermejo, LUCIFER artist Lee Garbett and SHERIFF OF BABYLON writer Tom King discuss what’s to come in their current series (Thursday – 4:30, Room 8).

• Always the most hilarious panel at the Con, the MAD Magazine panel led by longtime editor John Ficarra and his “Usual Gang Of Idiots” including longtime artist Sergio Aragones and GOODNIGHT BATCAVE artist Tom Richmond will be one not to miss (Thursday – 6:00, Room 5AB).

• The Graphitti Designs booth #2314 will also once again carry highly collectible, exclusive variant comic books available for SDCC attendees only. All titles will be on sale beginning Wednesday Preview Night, July 20. DARK KNIGHT III: THE MASTER RACE #5 features an exclusive cover from BATGIRL artist Rafael Albuquerque and sells for $15 and is limited to two (2) copies per customer. Additional variants include BATMAN #1, WONDER WOMAN #1, and SUPERMAN #1 featuring art by Jim Lee and imprinted on silver foil, each selling for $10. JUSTICE LEAGUE #1 also receives the exclusive convention variant treatment, featuring cover art by Tony Daniel imprinted on silver foil and selling for $10.

Download the new DC All Access mobile app for a complete list of panels, behind-the-scenes coverage and in-depth interviews directly from DC’s web series, “DC All Access.” The app is available for free at the Apple App Store or the Google Play Store.

About DC Entertainment:
DC Entertainment, home to iconic brands DC (Superman, Batman, Green Lantern, Wonder Woman, The Flash, etc.), Vertigo (Sandman, Fables, etc.) and MAD, is the creative division charged with strategically integrating across Warner Bros. and Time Warner.  DC Entertainment works in concert with many key Warner Bros. divisions to unleash its stories and characters across all media, including but not limited to film, television, consumer products, home entertainment, and interactive games.  Publishing thousands of comic books, graphic novels and magazines each year, DC Entertainment is one of the largest English-language publishers of comics in the world.
Posted by Blog Administrator