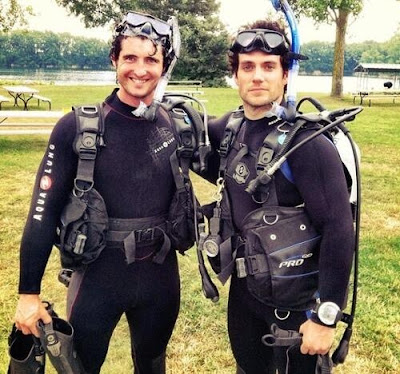 Paul Darnell is no stranger to Hollywood blockbusters. Lucky for us he got to work with Henry in Man of Steel, and recently shared some details of that experience with Virginia Tech where he graduated from:

Henry Cavill is also a truly amazing person. A man’s man. Henry is pretty much a stunt man in the fact that he is super down-to-earth, very strong, and extremely athletic. Working with Henry is just like hanging out with one of the guys.

Paul added that he didn't really have to step in for Henry during filming:

Henry did all of his own stunts in the film. I would rehearse and set up the stunts and Henry would come in and knock them out on film.

Read the entire article to find out more about Paul's work, and where you can spot him in Man of Steel.
Posted by Blog Administrator

Email ThisBlogThis!Share to TwitterShare to FacebookShare to Pinterest
Labels: Henry is THE man, Man of Steel, Production