Who's Ready For A Henry Cavill Appearance At Comic-Con?

UPDATE: 7/6: Today Comic-Con posted the full lineup for the Warner Bros. presentation in Hall H. They also list the 75th Superman anniversary panel that includes "talent from Man of Steel." We're excited to bring you all Man of Steel related news from San Diego, so make sure you're following us on twitter for daily updates. 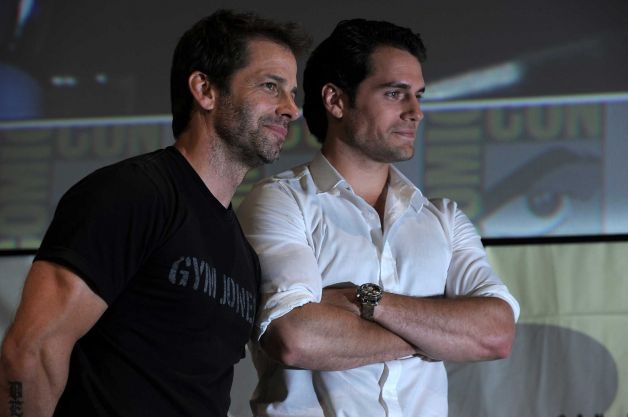 DC Comics has just announced what events we can look forward to at Comic-Con and we're guessing Henry could be the main attraction!

While Warner Bros. has yet to announce what films and stars it's bringing along, the DC press release mentions a 75th anniversary panel to celebrate the Man of Steel himself. It adds that "talent from Man of Steel" will be there. If that's not a giveaway, we don't know what is! - The Hollywood Reporter was the first to hint at a Man of Steel cast appearance, when it announced director Zack Snyder would be there to present his new short celebrating Superman's legacy.

We're not the only ones thinking something BIG may be brewing, MTV is also taking a guess at what may be on tap:

Marvel used last year's San Diego Comic-Con as a victory lap after "The Avengers" became one of the biggest movies of all time. (Robert Downey Jr. literally danced down the aisle of Hall H, high fiving fans along the way.) "Man of Steel" didn't exactly reach those heights, but it marked the first non-"Dark Knight" victory for DC in the film department, and that's why many expect a similar show from Warner Bros. this year. Peter Jackson announced yesterday that "The Hobbit: The Desolation of Smaug" would not have any presence at SDCC this month, leaving a big gap in WB's panel and the imaginations of nerds everywhere racing.

Could we see a big "Justice League"-related announcement this year in San Diego? We'll have to wait and see, but you can bet on MTV News being there to cover every inch of Comic-Con starting on July 18.

We'll also be at Comic-Con to bring you daily updates on anything and everything Man of Steel, and hopefully Henry Cavill.

Superman 75th Anniversary Celebration of World’s Greatest Super Hero Continues
Neil Gaiman Awakens THE SANDMAN For All-New Series
Journey To The Dark Side As Villains Take Over DC COMICS - THE NEW 52
DC Entertainment, home to the World’s Greatest Super Heroes and the most talented writers and artists in the business, announced today it will storm Comic-Con International: San Diego 2013 with an impressive line-up of events, announcements and giveaways that promise to amaze fans and continue to cement its position as a leader in the comic book industry.
The largest English-language publisher and the leader in digital comics innovation, DC Entertainment will conquer Comic-Con with a selection of can’t-miss events. Fans can look forward to an unprecedented celebration of the greatest and most iconic hero in history, Superman – including a look at the best-selling new series SUPERMAN UNCHAINED and the return of Neil Gaiman’s acclaimed Vertigo series with THE SANDMAN: OVERTURE, featuring the breathtaking artwork of J.H. Williams III. But the San Diego fireworks don’t end there, as DC Entertainment will be giving fans a sneak peek at the dark future within DC COMICS - THE NEW 52 and unveiling the JUSTICE LEAGUE KIA car featuring custom artwork from DC Entertainment
Co-Publisher Jim Lee to benefit the WE CAN BE HEROES giving campaign, and more.
DC Entertainment’s interactive 4,500 square foot booth (#1915) will take flight this year with a staggering collection of Superman costumes highlighting the Super Hero’s various eras and donned by actors including Henry Cavill, Christopher Reeve, Dean Cain and Tom Welling.  The costume gallery anchors a booth that also boasts video game demos, creator signings, a special fan green-screen photo area, giveaways and exclusive video footage.
Plus, with a schedule packed with over 15 panels, DC Entertainment is set to deliver to fans a stellar collection of appearances, announcements and events.
Can’t make the Con? DC Entertainment’s website is the go-to place for behind the scenes coverage and in-depth interviews. Visit the “Con Away From Con” page at http:// www.conawayfromcon.com.
Posted by Blog Administrator

Email ThisBlogThis!Share to TwitterShare to FacebookShare to Pinterest
Labels: Comic-Con, Henry is THE man, Man of Steel, Promo