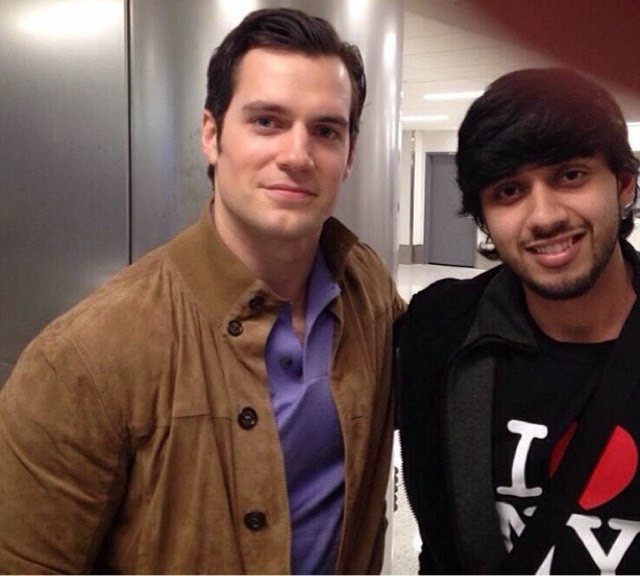 We have an update on this awesome photo shared by Taha Esa, after he met Henry at LAX earlier this month. He was out of the country and is just now responding to the fan reaction to the pic. He said he intro'd by saying: "Hey Clark! put my glasses on before anyone recognizes you! and he (Henry) laughed hysterically!" -- he mentioned that the ten minutes he chatted with him "felt more like 15" (us: HEAVEN). He also said "Henry is a great listener and talker and definitely loves his fans," adding: "What's cool is that he asked me if I wanted to take a pic with HIM. soo chill."

Seriously, nothing but deep respect for Henry when we hear these stories. Here's more:


@HenryCavillNews Thanks for putting the pic up! Sorry for the late reply! But he's an awesome guy and a real inspiration! #CaviLLAX!
— Taha Esa (@TahahahahaXD) May 13, 2014

And guess what?.. HE TOOK EIGHT PICS. Here's a new one he just shared with this caption.

Cam guy did not know how to work an iphone lol. In this pic, Henry was trying to tell him to push the round button! pic.twitter.com/PD3iIi3aiJ
— Taha Esa (@TahahahahaXD) May 13, 2014 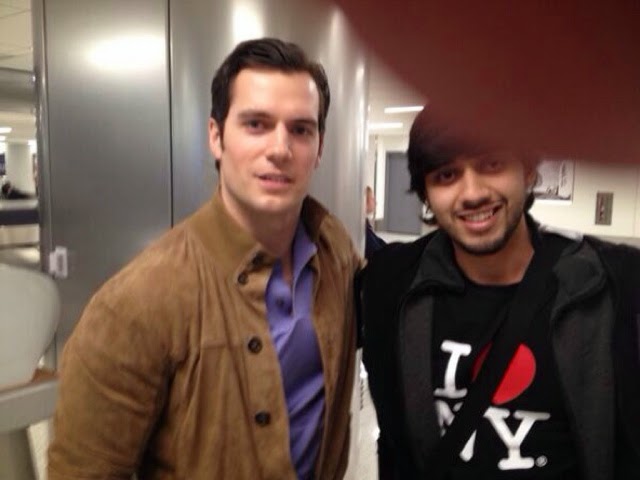 When we asked if he could share the rest, he had this to say..


@HenryCavillNews hahaha! they're all basically the same pics! the guy just kept clicking over and over! Mr. Cavill was a bit confused 0_o
— Taha Esa (@TahahahahaXD) May 13, 2014

Oh, but they're not the same, NEVER enough of a smiling Henry. Taha Esa promised to share more of his encounter with us, so stay tuned for that. We're just happy to hear the great response from everyone who meets Henry.

I first saw him in my connecting flight from Detroit to LAX. Since it was hot in Detroit, he was not actually wearing the jacket that he has in the photo we took. He was wearing a light blue collared t-shirt and yes people, it was very TIGHT. I noticed him because he was the only guy getting on my flight that looked as though his muscles were suffocating through his clothing haha! He was talking to one or two other people and when I saw his face I immediately recognized him. The flight was a Boeing 767 so there were two lanes that lead to the seats inside the plane. I was hoping that when I boarded I could pass him by, but to my ironic luck, he was in the far right corner of first class. I was walking down the left lane and spotted him from afar. I also noticed that he was reading a book. If my memory serves me right, it looked like one of the books from the series “A Song of Ice and Fire” by George R.R. Martin, but I could be wrong. Although, it would be pretty awesome if Henry Cavill was a Game of Thrones fan hahaha!

I was sitting in the back of the plane and I posted on my Facebook about how superman is on my flight. Immediately, my friends began texting me and telling me to talk to him and take a picture with him. I just told them that it most likely won’t happen at all. In fact, I didn’t even expect to meet the Man of Steel under any circumstances. However, after being pushed by my friend, Ebony, and my sister, Sania, I finally told them I’ll try my best but most likely nothing will happen. At that moment I just prayed for my health and safety but I made an additional prayer lol. I told God that if he can get me to meet Superman, I will be happy and grateful, and if he didn’t I’ll still be happy and grateful for everything I have in my life.

When the plane landed I tried to rush out as soon as possible. Obviously Mr. Cavill was already off the plane but I noticed the seat where he was sitting had a BUNCH of water bottles around it. Anyways, I ran out of the flight and took a shortcut through the terminal. When I got to the baggage claim there were not that many people in the area and to my slight disappointment Mr. Cavill was nowhere to be found. I thought to myself that it was a domestic flight and he most likely didn’t check any bags. Before I could think any further, I saw him walking out of the terminal with a chaperon and I was just staring at him like a creep lol.

He was standing in front of the baggage claim belt and I didn’t want to just approach him like any other fan wanting to take a picture. I was trembling a bit and had my glasses in hand. I looked down at my glasses and had an idea as I approached him from his left,

“Psst! Clark! Quickly! Put these on before anyone recognizes you!”

To which he laughed hysterically. He then asked me if I would like to take a picture with him and I told him that I don’t want to take too much of his time,

“No, no, it’s completely alright, mate!” his English accent wasn’t too thick but easily noticeable.

In any case, I took a few photos with him and we chatted for a bit. We talked about the last movie he was in, what it means to be Superman, what it means to be an actor, and acting in general. I told him that I do some acting myself, that I know how hard it is to become a completely different character, and that I have a ton of respect for him after the last Superman movie. I also apologized to him because when he was first cast as Superman, I thought he wasn’t going to do a good job but I was totally wrong. He put his hand on my shoulder and was very understanding as he told me that it’s completely normal to think that way.

Essentially, our conversation didn’t feel like one between a celebrity and a fan. It just felt like a discussion between two young men who have intense respect, passion, and love for acting. He enjoyed my sense of humor and respected my views. In addition to all of this, I noticed that his attention was nowhere else. He was making eye contact the whole time and not once was he distracted. Just goes to show that he’s a good listener. My sister says he would be the perfect boyfriend after I told her about that haha! In any case, I could tell he wasn’t too bored with me and that he appreciated being able to talk to someone like a human being rather than an iconic celebrity. I thought it would be a bit annoying to him if I asked him about the upcoming Batman vs Superman movie so I didn’t.

I am indeed a fan of Henry Cavill, but now I am an even bigger fan of Henry: a man who is respectable in the sense of being a person, not just an actor. Definitely a night to remember and I really hope I get to meet that guy again someday, J. 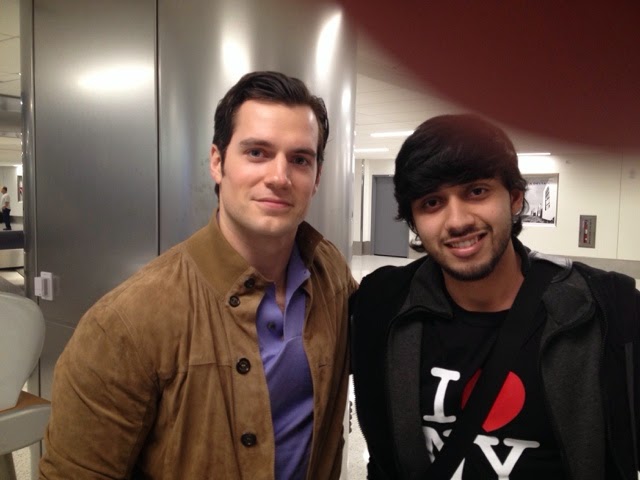 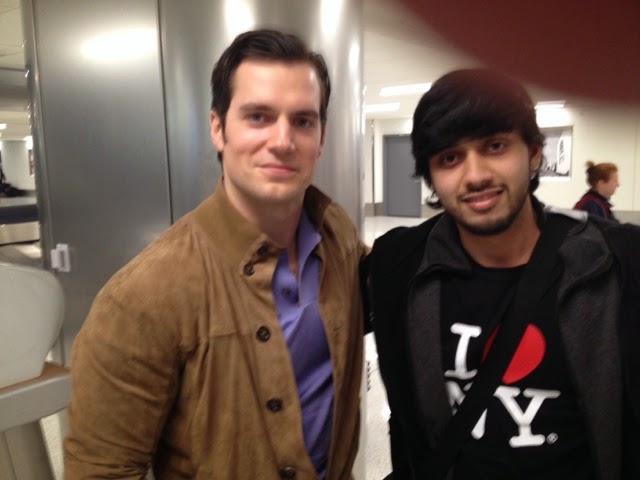 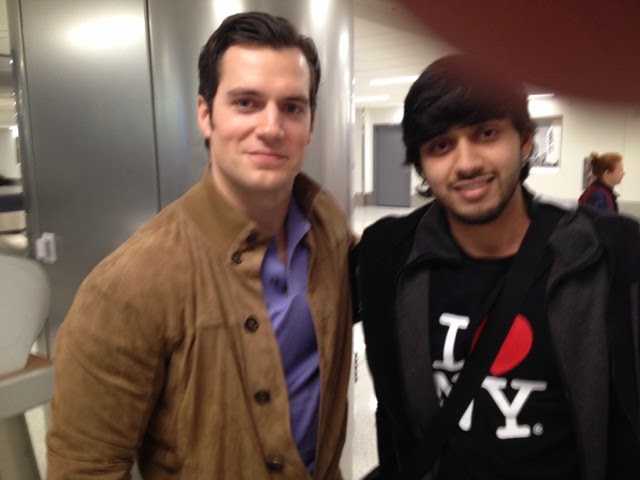 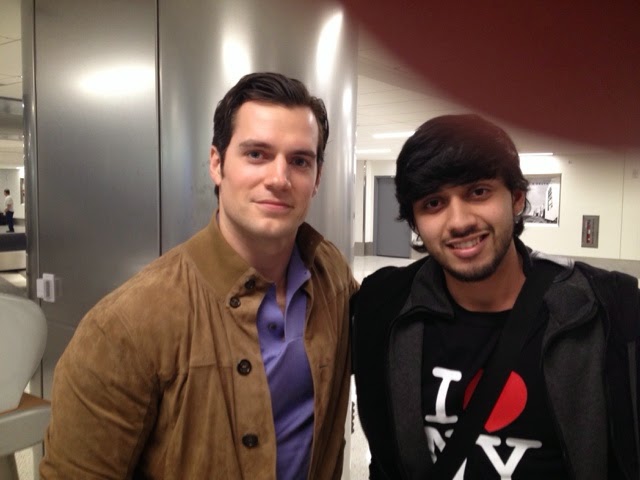 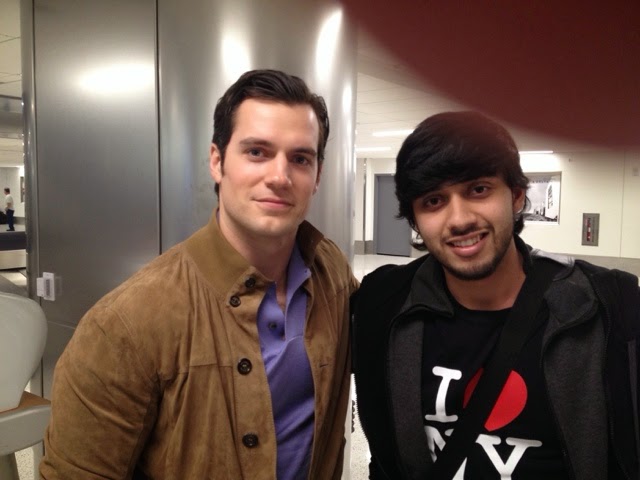 What do we always tell you: Henry Cavill  is a true Superman. Thanks so much for sharing Taha.
Posted by Blog Administrator