'Batman vs. Superman' Latest: Not Everything Is A Sign The last few days have brought tidbits of news on Batman vs. Superman but nothing major, i.e., no Man of Steel sightings just yet. Excruciating pain remember?.. anyway, here's what we have.

First off, today cinematographer Larry Fong, seemed to dismiss rumors that the card in the pic he shared on Instagram has anything to do with an appearance by The Joker in the film.

Yet since Larry has actually posted what could be considered Batman vs. Superman teasers, you can't not go there can you? - like we've said before, coverage on what's really going on behind the scenes during filming is guess work at best. Fun times. And while we agree with Steve over at Collider..


I truly do not understand people that want to learn the twists and turns of a movie 2 years out. It makes no sense. Why ruin the experience.
— Steven Weintraub (@colliderfrosty) May 19, 2014


I love not knowing. I love being blown away by a shot or scene or twist I didn't see coming.
— Steven Weintraub (@colliderfrosty) May 19, 2014


My friend:"Well I'm not gonna get excited about a film that comes out in 4 months.." Meanwhile I'm itching for BatmanVsSuperman details...
— Ross Arnold (@RossArnoldSan) May 20, 2014

'Itch' is definitely the word, especially when you hear Jesse Eisenberg talk to MTV, about what convinced him to play Lex Luthor:

He goes on to say the one thing he doesn't love, is getting recognized more often:

“You’re just exposed to more people, so walking down the street is more annoying.”

Who knew Lex was so modest. While Jesse has said he's not arriving in Detroit until mid-June, Ben Affleck has definitely joined Henry in the Motor City and appears to be settling in. A Detroit TV station caught up with him at an area gym Sunday. You can see the pics on their site. And Kevin Smith just shared more details on the Batman suit during his latest podcast:

"If you want to see what this f'ing suit looks like, you just go to Frank Miller's The Dark Knight Returns, go to the third book: Hunt the Dark Knight. It's the exact f'ing outfit he's wearing. That's why I hugged that guy all those months ago (Man of Steel Q&A), I f'ing weep. When I saw it I was like, "Oh my God, you're doing a f'ing outfit I never imagined I'd see in a movie in my lifetime.""

You can listen to the part where he mentions the suit, teasing there could be more than one (and see the artwork) at about 1:35. Thanks for the heads-up Juan Mimendi.


As for Gal Gadot, we now have a much better look at her in costume as Diana Prince, on the very French set of Batman vs. Superman Friday. 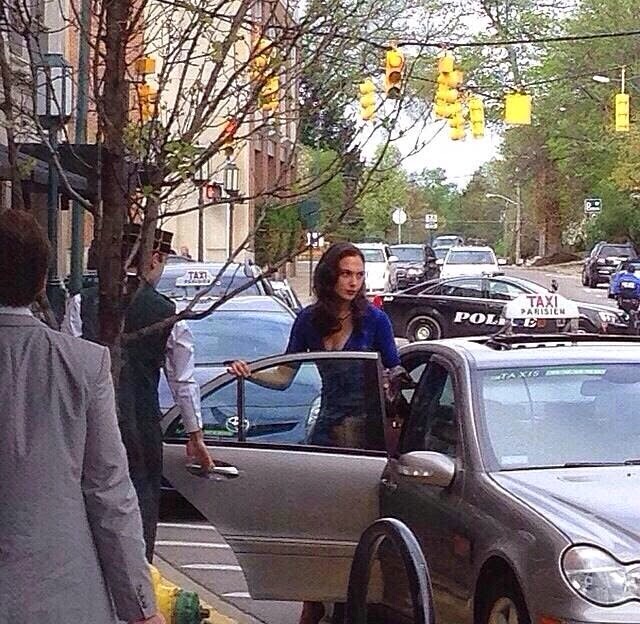 You can find everything else from that day in our wrap. Over the weekend Gal was spotted back in Tel Aviv taping a commercial for a clothing company. But as you can see work continues ahead of a busy shooting schedule at the Michigan Motion Picture Studios in Pontiac.


Not much happening except outdoor lighting getting put up. #BatmanVsSuperman pic.twitter.com/BjhDYJH1DS
— OG (@mamajo76) May 20, 2014

If you have any tips, tweet us/email us: henrycavillnews@gmail.com/or send us a message on Facebook. Looking forward to more filming news soon.
Posted by Blog Administrator